Emulation, not emulators then. Don’t be pedantic.  My point is that unless every single TO and participant manually copied the Melee ROM from their own personal GameCube disk, then somewhere along the line this tournament was breaking the law and nobody should have been surprised when the copyright holder took action because of that.

I really don't know what these FreeMelee people thought was going to happen.  Regardless of anyone's personal feelings about using them, roms and emulators are illegal.  That's not exclusive to Nintendo, that's any video game.  They go around shouting "Hey everyone!  We're holding a high profile tournament using modified copies of an illegally obtained game on an illegal emulator!" and then act surprised when the company that owns the rights to the thing that they are making money off of takes legal action.

All this hand-wringing and acting the victim, playing up this narrative of the big bad greedy corporation ruthlessly persecuting an innocent community of loyal fans is a load of bollocks.  Nintendo are 100% within their rights to shut down an operation where people are making money through illegal copies of their products.

You're not wrong to not remember much beyond the big Gaara fight because he really didn't do anything particularly noteworthy for the rest of the entire series.  He had like half a fight against that bone ninja guy, and then got shunted into being a background filler character just like every other character who wasn't one of the Trio of Terrible Protagonists.

Also, the flaming kick move used to be even more ridiculous pre-timeskip; it used to be he would spin in place to incite friction burns like a boy scout starting a campfire.  Yeah, One Piece is a lot of unapologetic nonsense but that's why I love it.

First of all:  the artwork includes the canister for Sanji's raid suit, which means they are factoring it in which means Lee is now absolutely outclassed.

Second, the track is a fusion of big band jazz and eastern kung-fu style music, as a mix of both character's respective themes.  At the very end of the track that would logically play at the conclusion of the fight, the eastern music (Lee's theme) cuts out leaving just the jazz horn section (Sanji's theme) to play the final motif.  It quite literally sounds like Sanji's going to take the win.

Also the Diable Jambe isn't a devil fruit power, it's a technique where he basically kicks fast enough that his leg heats up to the point of combustion due to air friction.

And the episode's out.

Next match is Sanji vs Rock Lee and unless they pull some more third-hand power scaling like they did for Might Guy then Sanji wins hands down.  His raw strength, speed, and endurance easily outstrip what Lee's capable of on his own, and that's without even factoring the Raid Suit he got on Whole Cake Island.

Get hyped, you factoring hectopascals.

Even with the Switch port a few years back and the recent anime announcement I had pretty much given up hope on ever getting an actual sequel to TWEWY, especially 13 years after the fact.  It's one of my favorite RPGS of all time; I'm super excited right now.

I've never seen RvB before, but is Blue team supposed to suck?  Like, is that the joke?  All they did in the promo was talk about how dumb, incompetent, and useless they are.   Even the one character they mentioned as being tough or capable in any way was couched with the fact that she's literally programmed for failure.

I just picked up Mad Rat Dead, a rhythm game/platformer hybrid.  You play as a dead lab rat who gets brought back to life for one day to take his revenge against the human scientist who killed him.  Standard sidescroller design with the added twist that every movement, jump, and attack has to be timed to the beat of the BGM.

I completely adore this game.  The gameplay can be a bit rough in some places, but the audio and visual design is 100% up my alley.  It has a beautiful and often very grotesque punk/comic book art style, and an absolute banger electro swing soundtrack.  It's got such a thoroughly unique and fully realized aesthetic that I love to see in a game.

At this stage Fortnight isn't really a video game as much as it is a mass marketing platform where you pay for the privilege of being advertised to, but that's a whole other discussion.

Honestly, I wouldn't care if Fortnight makes it in or not. I don't think it's very likely, but then again with the exception of Byleth and maybe Min Min I wouldn't have thought that any of the DLC fighters would be very likely so what the fuck do I know.  Sakurai and his team managed to make Minecraft in Smash work fantastically well, so there's no reason to doubt they could make any character feel fun and well-designed.

Bump for Hyrule Warriors news/leaks.  Dataminers may have dug up who the rest of the playable characters are from the demo.

One section of the assets contains map icons for each of the playable characters for specific missions tied to them.  Besides all the characters that have already been announced, they found map icons for the following characters all stored in the same place:

The presence of the modern-day champions is surprising.  I wonder if they'll factor into the story or just be post-game unlockables.

No More Heroes 1 and 2 are out on Switch right the fuck NOW.

This does lessen the sting of Travis getting totally fucked over for Smash Bros.  Somewhat.

You know the shitposting is getting out of hand when Doraemon guy is the one making the most sense.

Over on Smashboards, dataminers had found 5 placeholder spots for voice files to go after Min Min was released.  Now that Steve's out and doesn't have any voice lines, there are still 5 slots.  The same thing happened after Terry was released; there were two empty slots for voice data, with only one fighter left, that ended up being filled by the Byleths.  This has led current speculation to assume that one of the remaining DLC characters will either have female/male alts or a different selectable character with a different voice like Bowser Jr or Hero.

First thing that springs to mind for me would be Crash Bandicoot with Coco as an alt.

With all the extra bells and whistles for their portraits, Kogha and Hestu are playable for sure.

It's frustrating on a consumer end, sure.  But at the same time given Nintendo's history of constantly re-releasing as many of its games as it can as many times as they can get away with, I don't feel like there's any reason to doubt that these games will be made available again eventually.

And to be perfectly honest when you look at all the scummy shit that comes out of every other major developer these days, with predatory gambling mechanics, lootboxes and microtransactions, "live service" rip-offs, and abusive crunch being forced on developers, then Nintendo trying to push a handful of inexpensive titles by appealing to FOMO is probably the least offensive thing happening in the industry right now.

They patched out Steve's meat.

The color scheme, cloak, and golden headband thing are giving off some Vaati vibes.

For no other reason than because why not, the Minecraft World stage includes cheat codes to let you select which biome you get if you don't want it to be random.

:EDIT: Steve's out and Smash Bros is now INCREDIBLY cursed. 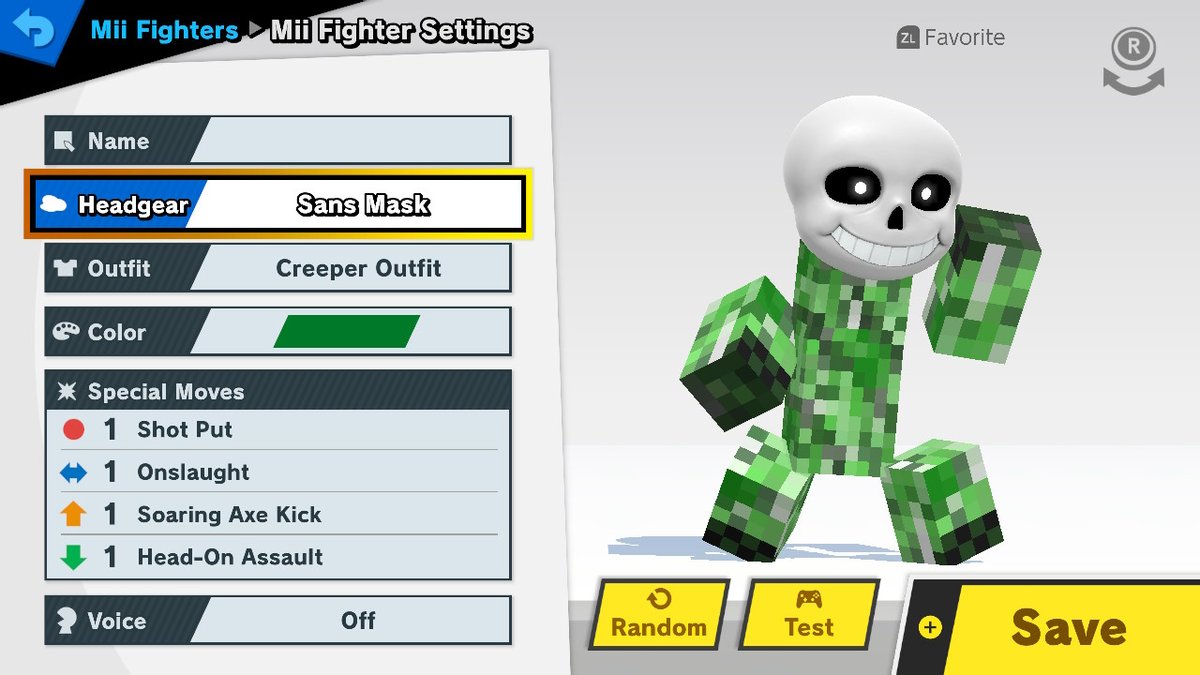