If it doesn't combo then the overhead bit becomes a mixup if the opponent is blocking. You could (for example) let the player cancel out of that overhead by spending meter, which adds a bit of strategy.

Re: KOF Sakura, Neowave Geese beta. All of my characters reuploaded.

Vans its great to see you back ! I cant wait to test the updates when I finish work today. Also a new buffer system ? Do you plan to elaborate on it in the future ?

Yes! This is the plan. Thank you so much for your testing help, I appreciate it.

The system isn't completely new, it's an update to Tiny Buffering, so the tutorials that were written there are still valid (for the most part, thankfully). My hope is to be able (in the future) to produce a module for Fighter Factory that can allow people to work with the buffering easily.

Of course such module could be adapted to work with other buffering systems as well and will be done free of charge / open source.

KOF Sakura, Neowave Geese beta. All of my characters reuploaded. 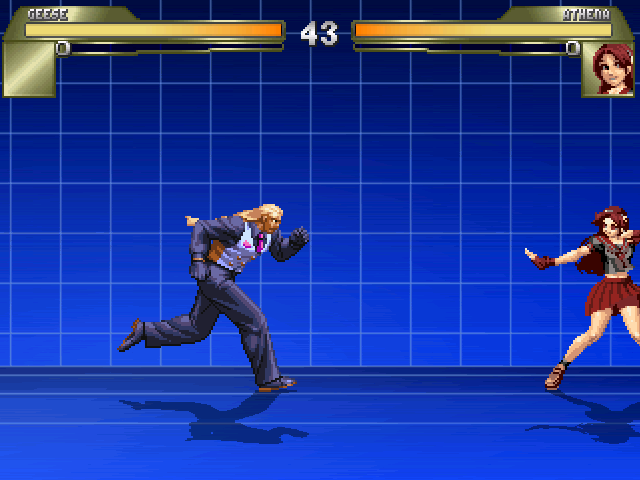 - I have re-uploaded ALL of my characters (including incomplete ones). There is a note I want to address here, the easly WLS characters were products of their time and in a different era of MUGEN creation. Please be kind and understanding, as they're not very well made and the comments in the code are not good. I only re-upload them because I understand some people wish to download them again and use them for reference.

- The LB characters have received some updates I entirely lost track of. I am very sorry. There might be bugs when pairing them together in simul mode, if there are, please let me know.

- I am sharing two betas that had not seen the light of day until today. Sakura (with the wonderful sprites of Darkgirl) and NeoWave Geese. NeoWave Geese contains a much more advanced system, and my hope is to upgrade everyone in the LB line to this system in due time. He has a new version of Tiny Buffering (dubbed Type X) which will be used in all my future characters moving forward.

- I am re-uploading the characters of Nazo no Otoko, as I was asked to keep them maintained.

- The "discontinued" section has incomplete characters that will not be finished in their current state. They have to be re-made.

Going forward, if you want to share my work please make sure to share and ONLY link to the above mediafire folder. Any other repository is not maintained by myself and I offer zero support for them.

And once more, all of my code is open source as long as credit is given and it isn't used for profit.

Re: Reverse engineering Mugen with Ghidra?

Yes, this has been done before with Winmugen. Perhaps this Ghidra program offers better results, but as you can see (other than the strings) every single function is labeled with a generic name which offers zero context as to their purpose or use.

You would need a person which is not only completely well-versed in CNS, but also patient enough to painstakingly go through every function and try to interpret its purpose. A person with such skills (and free time) would probably choose to tackle other projects instead.

For elementary uses, you might be able to to do easy things, like modifying game-modes to be simul-only or teams-only or very silly patches. Perhaps a more useful proof of concept would be to patch the hitdef code to accept integer numbers as attributes instead of just strings, this way you would be able to use triggers such as "cond" to modify their behavior.

Re: Really trying to get into basics - Need some help

The NeoGeo native resolution is 320x224 not 320x240. I think this might explain your size problem.

MUGEN.NET is a new community which strives to encourage and help new up-and-coming coders improve and receive specialized feedback. By utilizing the new social media platforms we break the barrier of entry and shortcomings associated with internet forums, as well allow users to connect and learn from each other more closely.

In MUGEN.NET we have a new way for asking for help: the "Ask an Expert" program. In this platform it is possible for anyone to ask any possible questions directly to experts within the community for a better opinion. We strive to make no question go unsolved, and no question go unnoticed or dismissed due to complexity. If there's something this community has learned, it's that there's usually nothing "impossible". By asking those with many years of expertise in the engine, your questions will carry much more meaning.

We shall encourage discussion and sharing of the brand new releases within the community, while at the same time providing a platform for those creators who require a more hands-on approach to receive feedback. By actively updating and sharing the newest advances in coding techniques, our aim is to help creators reach new heights so they may help others to improve as well.

I hope I can get to see you all in MUGEN.NET: the developer-focused community.

If you need an invite to join, please feel free to contact me directly via twitter: @vans1belmont

Hey just woke up. How's things been everyone?

Re: Looking for a certain topic on corner push

Maybe it's my notes on cornerpush in my website?

Re: Can't change my avatar~

Your image is too big. 150x200 pixels is the size limit according to the rules.

Hello! I am sorry for being so late to reply, I was a bit swamped with work.

Actually there are two things that might be making that command more difficult to do.

- The first is that in KOF there is plenty of time to perform the joystick movements. For half circle motions this is usually between 21 and 24 frames. This can be measured using an emulator with a step framing function as follows:

Perform the HCB command by doing f (3), df(3), d(3), db(3), b(3), button  The (3) denotes that the direction should be held for 3 frames. If it works, this means that you have at least 18 frames to input a half circle motion. Increase the time spent holding one direction by one frame, and test it by doing:

Code:
And so on, until the move fails. The last pattern you obtain will let you know how much time the game allows for the player to enter the command and still get the special move.

This is the time you should be using in the "time" parameter when you define them in the .CMD. Remember, changes in this parameter define how long the player has to input the directions on the joystick, so this will have a direct impact on how strict they feel.

- The second and very important thing is that in KOF it is possible to "cheat" diagonals because the official NeoGeo hardware utilized an 8-way joystick. In general most SNK joystick motions will feel "lighter" and easier to perform due to this design difference.

In modern fighting games the diagonals are seldom required to be 100% strict, even in Capcom games. So one possibility would be to redesign the command to be a little more lenient in this direction.

One compromise could be turning the command into a "power geyser" style half circle. That is, something like

Code:
This retains the strictness of the first diagonal (which is usually input by the player) but becomes forgiving in the second. Not too strict and not too easy.

I hope this helps.

Posted by Vans  in Contributor Suggestion Thread (Started by Cybaster September 03, 2007, 09:26:13 AM
Board: Feedback

He is one of the very few who are making original stages with a high level of quality. His work deserves more exposure.

I mean, that's true, but! That would mean the character already has the gethit animation for that throw in their .AIR. Think of it this way, the character that is getting hit is defining which animation they should be using from their own files.

I think if the helper spawns and put's it's own ID as sysvar(3) and you crosscheck that it'd be improbable a dev accidentally set it.

You don't need to do this, the actual number used for the helper can be checked using IsHelper(XXX). The sysvar being used is from the root, also.

This could also be great for characters that have transformations. It could be a way to check for alt animations during custom states so the character doesn’t have to switch back.

It's bit tough if the controller used is ChangeAnim2, since we would need the transformed character to already have the animations in their .AIR.

Ok, so this is not the same Yagami-AD showed in the video.

Indeed. Where would one find, say, this "original" Yagami-AD? For like, science.

So how are we going to know which playerID is what? Some characters spawn with helpers. A copy/paste job may not work with a random helper number because it could be used, right?

n should be a well-formed expression that evaluates to a non- negative integer. The trigger is redirected to the player with unique ID equal to ID. See the "ID" and "PlayerExistID" triggers in the trigger documentation.

Any helper that is created during this time will also receive its own unique ID number.

The number will be saved to a sysvar, which is always fixed.

Upon entering state 5900 it is enough to ask the helper to report its ID and store it in a sysvar, say, sysvar(3). Once it is saved we can retrieve the number using enemynear(n), sysvar(3).

We could also theoretically detect it by looping once through the whole list of players using a combination of PlayerIDExist and PlayerID(XX), var(YY) = ZZ. Where said variable and number are values properly chosen to identify this specific helper. I fear for this method since I have no idea if it would break if an opponent has too many helpers at once.

As far as I know sysvar(3) is completely unused by 99% of all (if not every) MUGEN creation out there. Simply because it was undocumented Pre-1.0 and still rarely touched upon,

You don't need to do this at all. All you need to do is read its playerID.