Here's a video showcasing the character

(Note: I'm working on my old computer, so there is a little lag in a couple parts of the video. Overall, this should give you a pretty good image of the character) 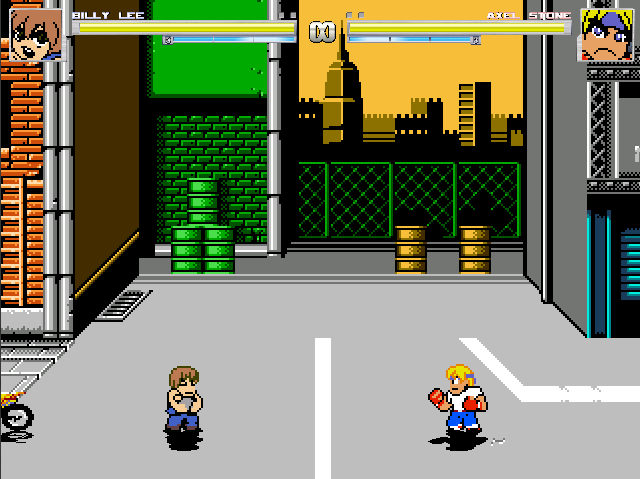 This character is almost all the way finished. About 90% done. I have to fix the sounds and truly figure out the movelist, etc.

Here's the link for the character! Hope everyone enjoys! 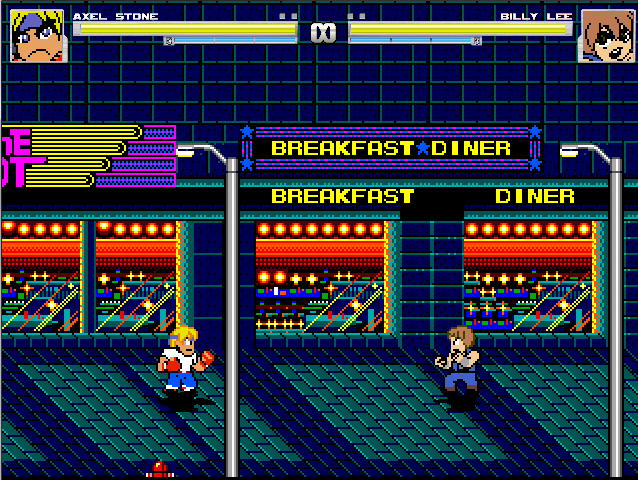 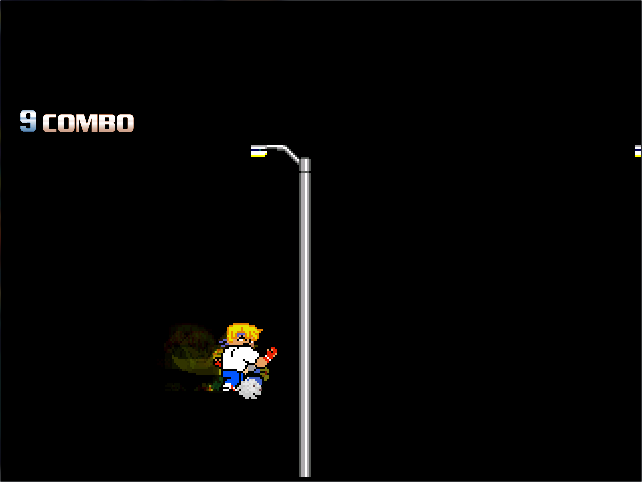 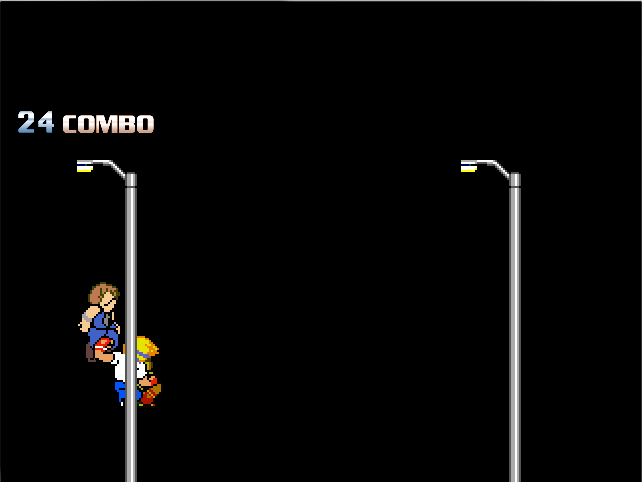 Movelist has not been updated, so I'll post in here:

----------
Special thanks to VirtualTek for Fighter Factory 3, Ryon for the tutorials, Alexei Roschak and Omega for the knife codes, Leonardo for the sounds and throw code, Infinite for the Hurricane Kick Super code and ZombieBrock for palletes.

All sprites were made by me.
Same playing style as my Billy Lee - http://mugenguild.com/forum/topics/billy-lee-river-city-ransom-edit-update-4617-168062.0.html#lastPost

Noice, always appreciated this series. I hope you keep at it my man.

Thank you! I'm hoping to continue as well. I've got an entire Alex and Slick sheet done as well from a previous RCR game I was working on, so I have the majority of what I need done for those! Just gotta put their movelist together!

FIRST POST UPDATED (4/06/17)
I know its been a while, but I have finally had the time to update this character.

Idk if anyone cares about this, but its my personal goal to finally get a character done from scratch.

I've been on MUGEN since 2007/2008 and its taken me this long to learn how to sprite, code (w/ some help) and troubleshoot a character on my own.

I hope I have the time to continue on this project in the future and I am planning on making some more RCR type characters in this same style as soon as I plan it out.

Wow these are very nice, can't believe I missed this! I'm a huge sucker for RCR stuff. Well done!

Thank you! I have another topic with more updates in it if you wanted to take a look! - http://mugenguild.com/forum/topics/billy-lee-river-city-ransom-edit-update-42816-168062.0.html

This is some freshness. I very creative and well executed creation.

Thank you! I really appreciate that!

Bump because I really need feedback on this!

Hey, I wanted to release this version of my Billy Lee because I wanted feedback on the work that I've done so far.

I'm fairly new at coding (I've been doing spriting for a longer time and finally decided to try and get back into coding).

All sprites were done by me. I will release the sheet for public use after I am finished.
Special thanks to VirtualTek for Fighter Factory 3, Ryon for the tutorials, Alexei Roschak and Omega for knife codes, Leonardo for the sounds and throw code and ZombieBrock for palletes.

Sorry for taking so long, I found some time today to update Billy.

-Removed "Knife mode" and turned it into 2 different supers
-Added/fixed [new] supers
-Added new win poses
-Added FX
-Decided against adding hitsparks. Might go back and add them later. Idk.
-Sounds have been added (I was listening to music and Bandicam picked it up :/)
-Backwards hop was turned to run (Thanks Ryon)

Hey, I'm going to be coming back to this when I get some down time.

-I am axing the knife mode and turning it into a super.
-Adding an Ultra Combo
-Gonna tighten up the animations a bit
-Fix unnecessary code

After I'm done with Billy, I've considered starting on Axel from Streets of Rage (In RCR form) or Cody from Final Fight (In RCR form) from scratch.

If you were waiting on an update, thank you for your patience.

Thank you dude! These are sick!

Took a small break from this, will be coming back with an update soon.

I can't get my character out of his transformation after I put him in it.

I wanted to implement a time factor so that when he enters the transformation, he has a certain amount of time to be in it, then after that amount of time he reverts back to his original form.

Does anyone have sounds from Double Dragon or River City Ransom that I can get a hold of?

So, since I can't seem to avoid getting back into trying out MUGEN, I decided to try my hand (again) at making a character. Lol

Essentially, this character is a 3 button character.
X: Punches
Y: Kicks
Z: Specials/Launcher
Spoiler, click to toggle visibilty
The thing I wanted to do differently is to have the special attacks actually cost power (Much like they would cost health in beat em up games). So, in saying this, in order to do any special moves (I only have one implemented so far), you need to have at least 500 points of power. The launcher costs 100 points (cause it allows you to chain an air combo).

I released the sprites earlier this week, but since I decided to make it into a character, I will be re-releasing a more complete set when it is finished.

I'm pretty new to Fighter Factory 3, but with the help of Ryon's tutorials, I've been able to get through all of the basics, so really I'm at the point where I'm deciding on specials/supers.

I wanted to add a feature that allows random weapons to spawn during the match (that can be used), but I don't know how to do that yet.

Other than that, here are some screens and I'll have a video up soon! Also, for those who are interested in making palletes, I've color separated the entire sheet already.

7/30/15: Video Added
Spoiler, click to toggle visibilty
This is still unfinshed. I have a lot to add to it. I'm really just showing off some of the progress I've made.

Special thanks to Ryon for the amazing tutorials and Alexei Roschak and Omega for some of the codes in their Axel Stone.

Since I'm still fairly new to programming, I've been running into a couple ruts. I hope to be able to complete this soon.
BETA 1.0 Release

A couple intros
A couple win poses
A hyper - (Currently researching Double Dragon on Neo Geo)
Another Super - (Hyper Hurricane Kick ?)
Need to learn how to add a time limit to the knife super
Added:

Special thanks to VirtualTek for Fighter Factory 3, Ryon for the tutorials, Alexei Roschak and Omega for knife codes, Leonardo for the sounds and throw code and ZombieBrock for palletes.

All sprites were made by me.
UPDATE 4/6/17:
- Added Super BGs (Not as good as I want it to be)
- Fixed some of the codes
- Added a new character select portrait
- Added some sprites in between animations for smoother animation
DL: http://www.mediafire.com/file/16ad4tz3wbreaet/BillyLee_-_Beta_1.2_Release_-_Banxman3.zip
UPDATED README:
Spoiler, click to toggle visibilty
Billy Lee from Double Dragons (River City Ransom version)
By Banxman3

----------
Special thanks to VirtualTek for Fighter Factory 3, Ryon for the tutorials, Alexei Roschak and Omega for the knife codes, Leonardo for the sounds and throw code, Infinite for the Hurricane Kick Super code and ZombieBrock for palletes.

I started this back when I was planning on making a River City Ransom fighting game (sadly, that fell through due to me being the only person handling everything).

For the most part, these are done.

Provided are:
- A complete set of cut sprites
- The sprite sheet itself
- Some palletes showing off the color separation (plus the original .act in case anyone wants to add more to the sheet)

Please credit me if used

Here are some gifs of the sprites that were made: