Re: The Scarlet Witch

Her Telekinetic grab only works in Flight mode and when opponent is in get hit state best used after you hit opponent with Air Hard Punch. First air combo as usual then use Air Hard Punch. During that time input into Flight mode and then Telekinetic Grab. Refer to the read me for more on this. I couldn't find all her of attacks sounds from MUA 3: Black Order. The Ai works best with Mugen 1.0/1.1  settings in game engine. Settings 5 and up is where her Ai is shining. 4 and below she is a punching bag. She mainly uses her moves in combos. I may update the Ai in a later patch. As far as the move commands,I wanted to keep it simple and within easy reach to combo after the other.

After you told me that I tested the telekinetic grab again and I guess it really is more for launch/splat hitstates than it is regular hitstun states, so I guess it was my bad for not experimenting enough. I also set the AI difficulty to 8 and I can definitely see why you'd consider it a challenge.

Another issue I found: Apparently the warp counter doesn't really account for character scales that aren't 1:1, so hi-res/HD characters like Muteki's May wind up looking bigger than they should be when hit in it 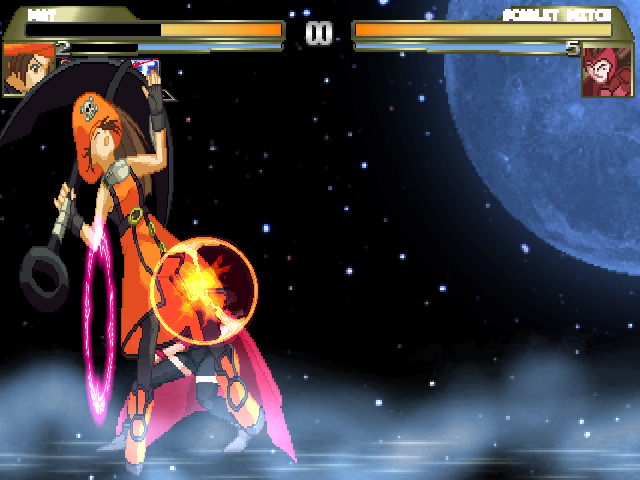 Re: The Scarlet Witch

I don't know if it's just me or not but her AI doesn't really seem that hard. Most of the time it just shimmies and uses low attacks, I don't see it actually use any of her actual tools.
About the character herself: the moves involving throws tend to look a bit janky and idk why, her attack grunts sound more like pain grunts, I cannot get the flight mode's telekinetic grab to work even in an air combo, and move commands seem all over the place.
I don't really have much to say about this, it's an okay release but "okay" is about all I can judge it as.

Re: Character of the Month: April 2022 Voting

Most of the time I just test things on a whim, but Yuyutista and CvS2 Jotaro were my personal favorites of the month.

Re: AngryBirdCooler's WIP: Argentea (Darling in the FRANXX)

Posted by SquidlyPoli1  in AngryBirdCooler's WIP (Need Help): Argentea (Darling in the FRANXX) (Started by AngryBirdCooler June 01, 2022, 11:52:19 PM
Board: Projects

Shimmering Brony if you are reading or listening to this, Can you make the sprites for Argentea, please? I'm not rushing you or anything, I'm just asking... I'll be doing the coding and sounds after your done....

I don't think he'll do it for you if you're just requesting it for him. I know he does commissions (where you have to pay money) but I'm not sure if they're open, and from a few conversations in Discord he doesn't seem to be interested in your idea.

Re: Character of the Month: April 2022 Nominations

Disclaimer:
I am aware that the issue about adding 'Dizzy' animations in a char is debatable.
In fact, I know this Cammy does not have a 'Dizzy' code instruction.
Still, I added the animation, in case someone wants to add the coding.
Perhaps it can be added as an option in the 'Config' Text file in the future.

I'm not exactly sure what you mean by this but there are a lot of characters made for the engine that use the stun animation and I think it is also used in the continue screen if no animation for it is set.
If I were to keep both stun animations I would just keep them in the sprite and animation files (both animations using the same anim number) and not make it a code config since most of the stun codes are states on P2's side and having a code on P1's side on which animation to use would probably not work (especially with cinematic hypers).

Some feedback I have is that inputting D, D, x can put her into an invalid state (specifically state 1110), and that she should only be allowed one air dash (most likely for both directions each) at a time because holding the z button can allow her to stall in the air for a bit.
I also think allowing the movelist/card list to be viewed offline or outside of GameBanana would be beneficial as I kinda felt lost when first trying her out and did not initially know that the movelist was even on GameBanana.

Hope my feedback helps, nice to see that you're getting more attention.

Honestly I think the head on the first one was fine, it seemed more consistent with the rest of the sprite. The shading in Xenoverse seems to be very different since the light source is from the front rather than the top.

Here's some feedback:
- Hyakki Goheki doesn't hit
- The wind effect on his fully charged hadoken is so subtle that I can't notice, however the upwards versions lacks transparency.
Other than that people already pointed some other things that I noticed.

I don't think Hyakki Goheki is supposed to hit. It's really more like an aerial parry, especially since it's done from a demon flip.

There really isn't much I have to say about him. He plays nice, he has some pretty good buttons, but I'm not good at using stuff like the demon flip and the counters so I'm probably not getting the most mileage out of him.

I'd be willing to help, but I'm not sure anyone else would be since money isn't involved.
There's also the idea of trying to do everything by yourself, but that can be tedious at times.

Oh god, it has been too long, hasn't it? Well, for those that have been wondering where I've been, I've been on a roller coaster. I've taken a bit of long break due to lack to motivation, and personal issues, but I'm hoping I can get myself back into here.

I know the feeling. I've had a lot happen as well and my motivation was scrambled at one point, but eventually it just started coming back to me... even though I don't know what exactly I could be giving it to.

That being said, I still think Yama could benefit from having Eviscerator as an overhead, given how the move looks (and even functions). Freak Out Fist also looks weird to me but I don't really have an idea how to not make it look weird, and maybe EX Spray Sand could be some kind of juggle starting tool instead of how it is right now. I don't really have much to talk about outside of that, and I hope things will be alright for you.

Terry has been updated with a few... minor? changes, like changing the move type to idle during recovery frames in certain moves in order to avoid belated counterhit functions and the removal of a few unused code snippets. I have also added the Super Jump command to the readme as it was a big JUS mechanic that I somehow forgot to list. Whoops.

I promised I would release him in August but things happened and I wasn't super motivated to continue despite only needing to do one thing before I released him. Happy new year.

Re: Character of the Month: September 2021 Voting

Akko and Horned Owl/Miko for me. I appreciate some of the other efforts but I seemed to like those the most.

It's not so much about what you said as much as it is the way you're wording it. You don't give other reasons as to why Sora is as busted as he is, you only said that because he was able to counter Wonderwing.

While you said Wonderwing can be countered by throws, it also has a variety of other flaws, so saying that Sora is busted solely because he can counter it does not sound logical.
Nep Heart said, November 02, 2019, 03:25:50 AM

Unsafe on block, can be grabbed out of and a fair amount of end lag are not qualities I would call an incontestable move. A competent player would catch onto the move pretty fast if it's being abused and some of the more challenging AI will render it just as situational. There are a lot of specials which grant this kind of benefit and would give the player no real reason to use the move if it didn't have some added bonus that made it better than a generic special. Not to mention its damage in Smash is pretty damn high itself, so, 200 damage doesn't sound unreasonable when put into perspective of those factors.

[OP is] overselling Wonderwing. It's a newb buster, but an experience player would play that move like a fiddle.

Re: Character of the Month: September 2021 Nominations

Posted by SquidlyPoli1  in Character of the Month: September 2021 Nominations (Started by Jmorphman October 12, 2021, 07:30:28 PM
Board: Contributions of the Month

It's somewhat interesting that the best releases this month were collaborations between a spriter and a coder. That's the power of teamwork, I guess.

You're banned because... I personally don't understand the direction this game is going in.

Not very many people continue it and those that do tend to not post much. Many of the jokes tend to be repetitive and predictable, especially if such a joke echoes the prior joke, which makes it lose value if the same joke keeps being echoed over and over again. Humor can be hard, and I understand that. What makes a joke good to people is subjective, and not everyone has the same sense of humor, so you really cannot appeal to everyone with it. Humor's difficulty and subjective appeal, however, do not excuse the lack of value an over-repeated joke may have.

Repetitiveness making a joke lose value also applies to memes, but even more so because of their wide appeal. References to pop culture and other inside jokes are something anyone can understand, but they tend to be heavily disliked because of people overusing them and only appealing to those that understand what they say. The wear of a good joke or understandable reference may be hard to grip for some people. Something like "Doilus Stage" or Parappa repeating others' words may be funny to people the first time, but some tend to get tired of it once the joke gets too out of hand, and it loses its general appeal. You can't keep echoing off others' words or making random-access one-liners, because eventually people will get tired.

The six unique characters from Nijikaku, Munch, Kabegami, Pittan-San, Bakumatsu, Getsuyoubi & Unknown.
They make that fullgame very special and memorable for me and are some of the best creations out there in Mugen, everyone should have them.

I should add that Pittan-san is not necessarily original, but rather an original take on an already existing character; the character in question being the small squares from Kotoba no Puzzle Mojipittan, which is a word puzzle game focused on the Japanese language.

How do you make these? A lot of them seem to have too much radial blur, which takes away some detail (Sakura and Akuma are probably the worst examples of this)

Re: Character of the Month: June 2021 Voting

Congratulations to KarmaCharmeleon for the win!

While I don't really like Angel as a character all that much, I did vote for her out of commemoration for the effort put into her.