This goes unexpectedly well with other MvC-ish graphics stages. Thanks for the upload, appreciate it.

Sorry for the delayed response here.
Yeah I figured bullets spawning in close may be a gameplay issue, still feels weird shooting through an opponent. Difficult to find a solution that doesn't allow infinites up close while preserving overall combos I suppose.
The jumping back as supposed in MK11 is not the issue itself, just the FX give off a strangely delayed feeling of when it happens. Maybe make a small explosion charging up effect so it feels more impactful instead of the enemy just falling down after a short duration? Right now it feels like someone pressed a pause button for a moment.
Tested the incorrect QCFy on the mugen default screenpack, both under standard and directx renderers.
€ You could try making the bullet fx an explod inside the helper instead of the helper animation, see if that helps.

Hm... none of the issues I reported have been fixed. For instance, his QCFy still looks like this for me: 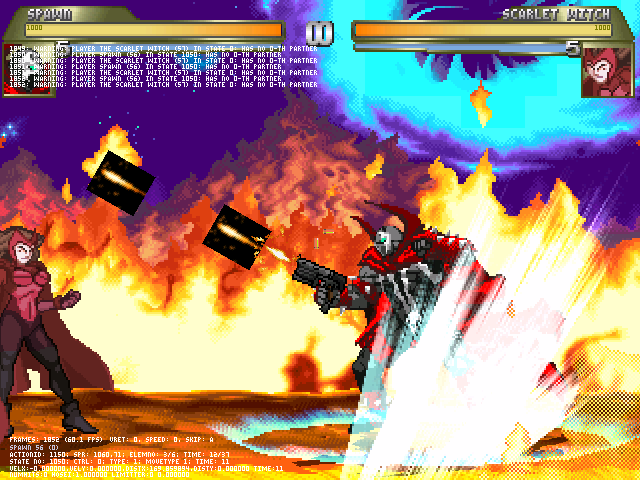 A worthy successor to the Temple of the Fist

It does for me, just checked.

It's a great looking stage. Not exactly my cup of tea, but original and well done.

Great stage. New MvC-ish stages are rare these days and those that look this unique, even more rare. Thank you very much for this.

Currently the best Spawn out there. Feels a bit edgy here and there, mostly because the animations are not very fluid in places; missing sprites and all that. Not holding it against you. Cape "animation" during FF is close to giving me a seizure though.
Other stuff that I found (in Mugen 1.0):
- QCF x will miss if the opponent is close
- QCF y will miss if the opponent is close, projectiles aren't masked
- QCF b (the grab) has a noticeable and slightly awkward delay between him jumping back and the knockdown effect of p2.
- all characters that I've tried (Mai, Spawn, Bloodrayne and Spider-Man) give a debug flood with x state has no 0th partner warning.

Re: All stages updated to Mugen 1.0

Guess I need to update some of my stages then. Great to see you return to update your old works. Although me using an MvC ish styled mugen it makes me miss super jump on some of these stages.

It looks certainly unique and of this kind of stage, there aren't a lot. Very solid and consistent work.

The one thing that stuck out for me a little the small rock debris floating around in the background. It looks like it's only one layer and makes it a little stale over time. It's not very noticeable during fights especially when you're an active combatant but if you're just looking at it it feels a little flat.

This is a great rendition of one of the most iconic stages I can think of. Stellar work all around, and thank you for including both 1.0 and 1.1 defs.

Updated Jubilee's Patch. She's now hosted with the main patch archives on Moddb.com. See first post for Download link.
V1.1 update
- Her Spark Wall now has range dependant on button strength. Medium and Heavy versions don't reflect anymore. Heavy version throws higher and further, with a little more damage.
- This also affects her counter since the 1320 anim now has more range. Deals little damage overall but knocks the opponent away.
- Some touch ups to her damage values and scaling, feels more consistent overall now (you may want to tone done the overall attack power in case you deal too much damage as I usually play with 150% life values)
- Her normals give 20% more power.
- 236x ground & aerial startup faster by 5 frames (slightly more consistent in combos, still dependent on RNG)
- couple of touch ups to her AI, should be slightly less derpy now

Comic characters done right are my favorites to have in Mugen. I have enough Ryus, Kens, Jin Kazamas, etc. i don’t get excited for any new versions of them because they’ve been done right way too many times.. so when a character from a comic or TV series is done good Capcom style it automatically has my attention

I think I suggested Martian Manhunter by efrencortes a while ago. There’s a problem with his super jump button. Might be some other slight things that could be adjusted.

Someone did. Still haven't checked out that character. Neither had time yet to work on any other projects. Still working on other -non-Mugen- projects; I just squeezed in some work after I got permission to release Phoenix.

Hey Swanky, how you doin? I just want to say the work you have done for your characters is really good. It's nice and always cool when guys like you work on custom Marvel characters and getting them the proper work done on them, since custom, fanmade, and unofficial comic book characters have infamous history of not being the best made or programmed.

Thank you for your kind words. While I agree that some comic book based characters could be better it's still a lot of hard work making them in the first place. We should be grateful all of of them were made in the first place!

Omega Red has been updated. His Omega Drain now actually feels like it's doing something. Life Drain damage has been tripled, life gain has been doubled. His download has moved over into the main file on moddb.

Re: Phoenix Edit for Mugen 1.0

Phoenix has been updated. Her TK-Shots now also block projectiles. Her download has been moved over into the main download on moddb.

V1.1
- Added several triggers to make sure he doesn't get life regen when at life = 0
- changed around some of his Life Regen super. Now activates at Frame 9. Deactivates when roundstate != 2 or Life = 0

€ Mr. Sinister is now pushed into the main file on moddb. 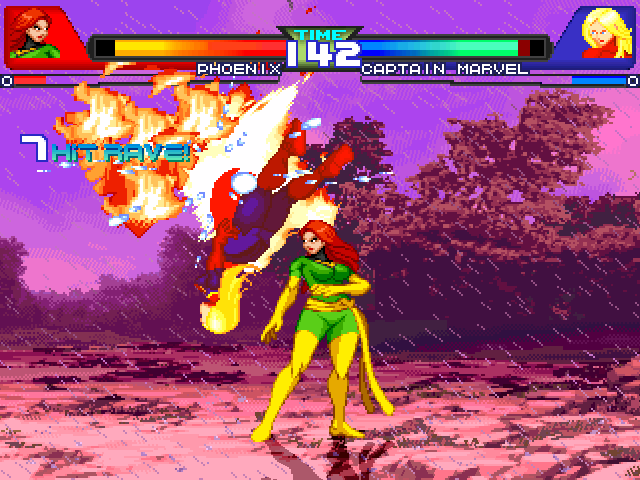 There are many versions of Phoenix around at this point. While this specific edit does not take advantage of the most advanced (and most fluid) spritework of Phoenix, it hopefully makes up for it with overall consistency, in both looks and gameplay.
Blade graciously allowed me to release this edit, thank you very much for doing so!

List of Changes:
- reworked TK Trap. TK Shot no longer affects TK Trap effects. TK Trap can now counter many projectiles.
- TK Trap duration slighty decreased.
- TK Trap effects changed. Fire goes out a little faster to give a visual hint when it's about to go out
- changed Phoenix Rage effects and damage on block
- Streamlined combo system to hopefully disallow for infinites. Now has a clean structure of how combos can flow (zigzag)
- changed some frame data to further disallow for infinites, or for basics to better connect
- added some missing floor / ceil expressions
- extended sHP hitbox to the flame. Now a potent tool for zoning.
- deleted the flame effect from cHP, now used by Phoenix Rage
- repositioned some fire effects for better flow
- added a pushblock move. Effects from Breakers.
- added a simple AI. She does a good job zoning enemies out
- fixed 9000,1 portrait

214 PP         Healing Field (Level 3)
Gameplay notes
Phoenix is relatively nimble, but has slow normals. Most of her kit revolves around clever use of TK Trap and TK Shot to bait, zone and punish the opponent. It is also possible to use them to extend combos.

Specials
- TK trap has been reworked significantly and is now used as a trap, zoning and even combo extending tool
- TK trap height is dependant on strength - weak will place low, medium will place in front, heavy will place high
- TK Shot has different travel speed depending on strength
- Teleport distance based on strength
- aerial Teleport will teleport to ground
- Hover gives a small upwards momentum for when you want to extend your airtime 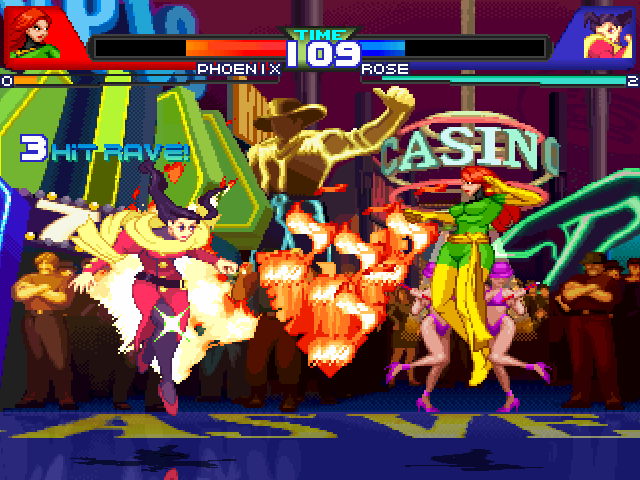 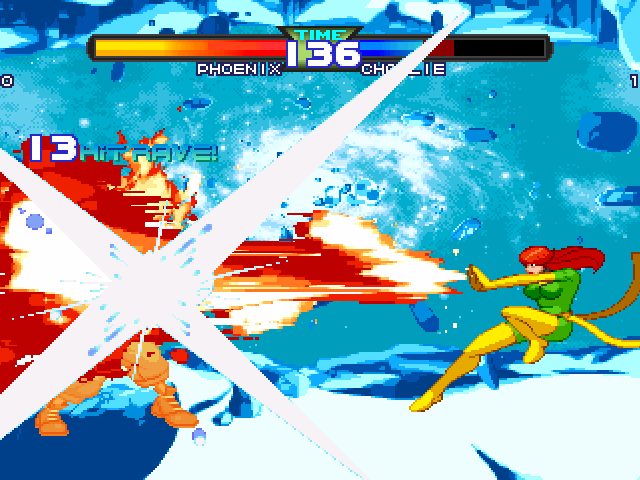 Short update on the Flash edit. Not happening right now, but I did check several of Mr. Giang's edits, which are all for Mugen 1.1. While they are nice, I intend to keep my edits to 1.0. Retrofitting the characters and systems doesn't seem possible without rewrites, and I'm not sure they would work. Because of this, working off of Mr. Giang's work is off the table.

...just to make sure. Don't expect them to come, at least not in the near future. Keep an eye out in my general releases topic or in a new topic if that character will be released as a complete package, not just a patch.