Re: Basara's WIP thread (Bishamon is back from the grave!!)

You might want to check out Valgallah, he's been doing the SCWU characters for a decent while now, among may others. Might help you with making progress on Sin and Alex.

This would be an awesome tool, if it didn't take up so much space for all the extra stuff included with it that most people probably don't use.

i did my best to reduce highly the size of the tournament but it is very complicated!
in order to have the best quality , it is necessary! (introduction , pictures for presentation, video,ending , sounds, background wallpaper  and other stuff!)
don't look after the size but what you can do with it!
thank you for your comment! enjoy !

Wouldn't the ideal tool be something that is bare-bones, that way people can modify it themselves to include their own unique take on the tournment concept? For example, wouldn't it be smarter to have a separate version with DUMMY files, and then simply tell people "you can replace all these files to include your own unique art or what you want to present this tournament", rather than have an enforced tournament standard.

After all, this is a tool, its designed to be UNIVERSAL, but it cannot be UNIVERSAL if it appeals to a specific art style or visual style or something along those lines. Its not like a screenpack, where the packs are designed to give off the idea that "hey, only certain things would actually look good in this, as opposed to just shoving anything and everything into it".

Just some food for thought. Its a great tool nonetheless, but there is just such an absurd amount of stuff that I'm sure most (if not all of us) don't actually use or NEED, that they clutter down the program itself with images, audio, and video files for the purpose of running a tournament. In other words, the functionality of this program, is being hindered by the fact that this program needs EXTRA files in order to function.

It'd be like downloading a text editor but then the text editor comes with an opening video, a screensaver, and some other content that does not actually improve the functionality itself.

This would be an awesome tool, if it didn't take up so much space for all the extra stuff included with it that most people probably don't use.

As usual, another excellent character release from Valgallah. Hope you've had a good Christmas and a great year so far. Hope 2022 continues to improve or does improve for you.

Re: Goku made by 280gou and Vyn straight too Ssj2

Can someone explain to me why the Goku made by 280gou goes immediately Ssj2 in a match? Even when I am playing him he goes into ssj2, and doesn't start in his base. Anyone have experience with this character?

I'm talking about this character

Thnx in advance I hope somebody knows how to fix it.

Each button press is a different saiyan level.

Assuming you set your keys to ASDZXC, then A is base, the rest are saiyan levels, and holding Enter + any of them is AI controls the character.

This is the version I have, also known as "Kuebiko R"

This is the version I WAS looking for


UPDATE
I managed to acquire this character through Discord, big thanks to the person that shared it on there. I then re-uploaded the Ria-Coarst pack to AK1 for everyone to enjoy.

does anyone have a link to hulk?

I have re-hosted all of MGMURROW'S characters here. So unfortunately, you will have to download all 200+mb in order to get Hulk.

Its nice to see MK Too wasn't forgotten. Thanks for sharing this Bane84. Keep up the good work and don't push yourself too hard.

Re: Best of a certain creator: Reuben Kee

So serious question... are all of the people that are getting polls, only going to be creators with a small number of creations? I'm going to assume so, cause otherwise, the much larger character creators (such as Descolor) would take way too damn long to go through every single character they've made.

Re: The Knight / Ghost from Hollow Knight First Release

This is a very promising character, minus the few bugs you mentioned, there doesn't seem to be much else wrong with it. A bit of polishing for the hitboxes here and there could help, but otherwise, this is overall a great character. Very good first release.

Re: Character of the Month: October 2021 Nominations

Haven't had to put someone in the box for a while! Pay attention to the rules next month please

So, I grew up watching a LOT of TV, and believe me, if I wasn't watching TV, I was playing video games or finding any other reason to never go outside. That said though, there have always been times in my life, and even to this day, where I will become nostalgic about something, despite having never seen, heard, or had any interaction with whatever this thing may be.

What about you? Are there any films, songs, TV shows, foods, toys, or other various items and things in this world, that you are nostalgic towards, despite not knowing anything about them, having no interaction with them, never having actually played with/seen/heard them, or any other involvement-free accounts of these things?


For me, I can name off quite a few TV shows (including some anime ones), that I have an absolute nostalgic trip for, and yet... I've never seen a single one of these, but I do however know the theme song and have heard it so many times, it just always stuck with me, such as:


Never seen the show, never even watched a full episode, and yet, this theme song, I remember word for word.


Another one of the 4Kids dubs that I never watched and still haven't even seen one episode of, but goddamn this theme was amazing.


Something that my family used to watch often, ended up hearing it so much, the theme just stuck with me.


Back in the day, my sister was obsessed with watching this damn show, and now I'm stuck with this song in my head for the rest of my life.


Never owned these toys, never played with them, only saw this commercial, and every time someone goes "hey, what is a toy you always wish you could have?" this was it. I dunno why, but man, every time I see stickman characters with good animation, immediately I think of this. Also this is what got me into liking Mr. Game & Watch games and the character himself.

Gotta get yourself some Metal Slug.

Going to be completely honest, both of these look absolutely amazing. Obviously, as with anything, there are fixes that can be done, but for the most part, the spritework is fantastic, and they really capture the style you're going for. I wish you much luck, and I'm looking forwards to see how these turn out.

The bottom two spots will just be random select. When I send the Beta out, the training character will be included for testing purposes. The statue has had the hair edited to look like Illian and some other stuff removed, I think it does the job as is.

And yeah I am very strongly considering moving this to Ikemen just for the in-game movelists alone, but also for the unlockable character feature, dizzy points and all that. I just haven't tried porting the stuff yet (though I'm told it's easy) and I'm a bit short on cash to pay Mordecool to port it for me.

Also the beta will be sent out very soon, possibly today. No intro or endings, just the characters, basic AI, stages, and the training tool to practice with.

Very cool, this looks like it'll be quite the game to play once it is fully realized.

Yeah, as far as I know, porting characters to IKEMEN is quite easy, but I'm not so sure about crossplay between MUGEN and IKEMEN, as I do believe, a lot of the IKEMEN features do not exist within MUGEN, so once you do port your characters, they will no longer function on 1.0/1.1 (as far as I remember).

So there's a good chance a large number of people that review characters and even betting groups like SaltyBet and SpriteClub would then no longer be able to review, test, or even give their thoughts on them when against the large grand scheme of MUGEN as a whole.

These stages look so good, the one that intrigues me the most is 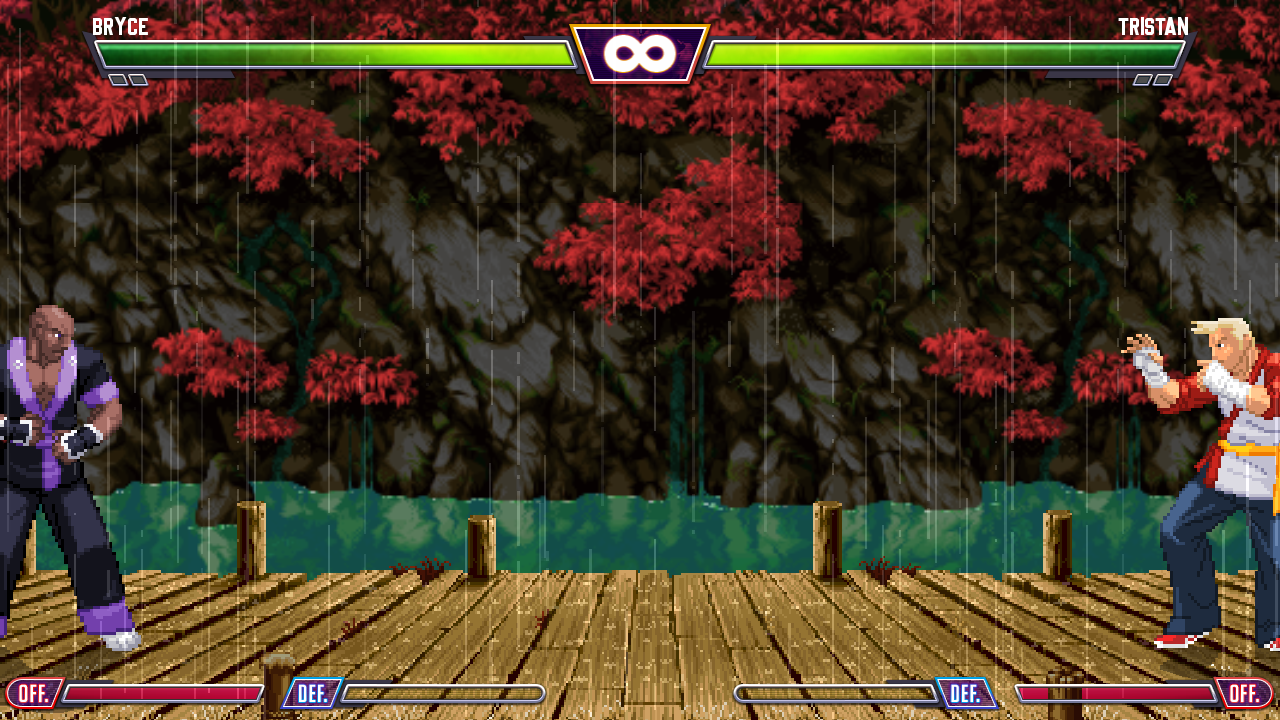 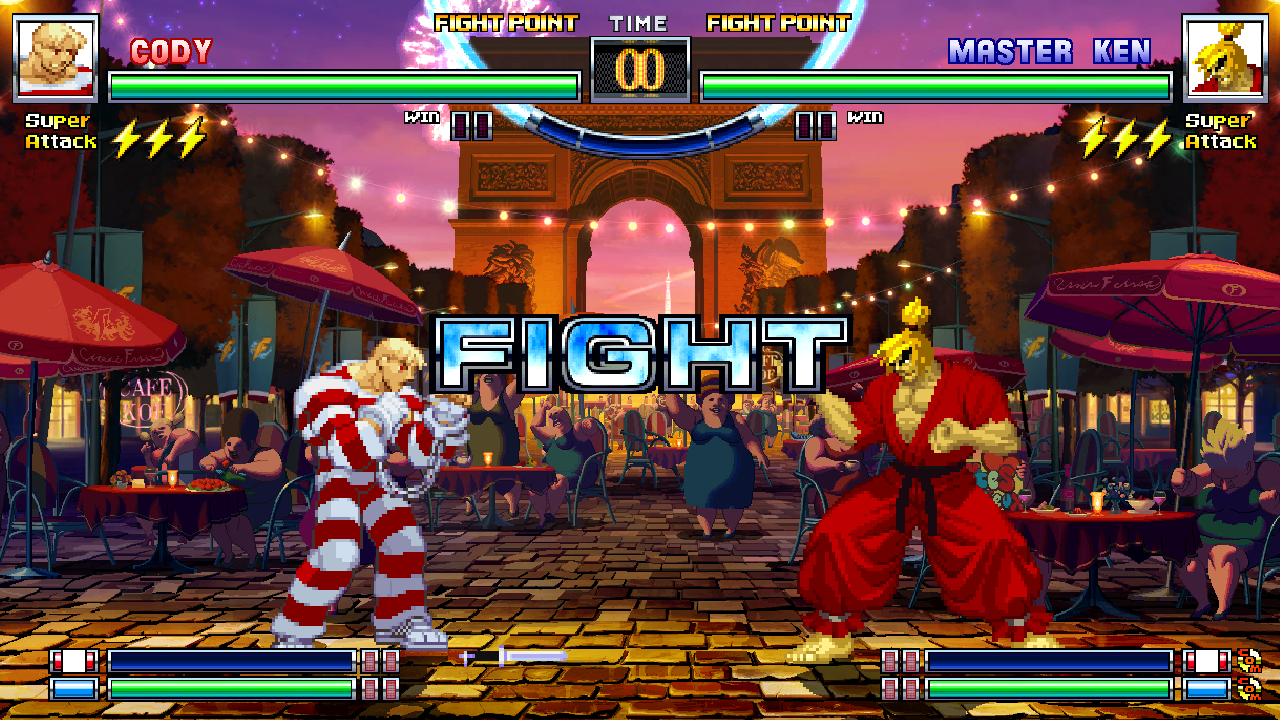 Who made this Master Ken?

Gotta say, normally I don't collect MLP characters or anything similar, but ya know... this one deserves to be a spot on anyone's roster. Its a solid character, good gameplay, great controls, good stuff.

Wow, talk about a blast from the past. You take care of yourself All-Star Platinum. Hope that everything else in your life that is going on, works out in your favor. Take care bud.

Alright cool, I'm glad people are interested! I'm very badly hung up on stages stuff right now, I may send out a beta with simple placeholder stages in it though.

Food for thought, rather than doing stages that are based on where these people are from (which is often the norm in fighting games), why not do stages based on what their fighting style is. (i.e. wrestling ring, MMA cage, etc)... or is there something else you might have in mind?
Page 1 of 51 2 3 4 5 > Last →