The Projectile controller takes all the parameters of the HitDef controller

Based on my tests on mugen 1.0 and 1.1 Projectile sctrl does not support ChainID and NochainID parameters at all.

if i want to put a bg sprite under the char name how do i make it work?

spr/anim/text layering works exactly the same as mugen, which means you can't change rendering order of any of these elements from within screenpack (although in ikemen it's not hardcoded, so technically it's possible to change the order by rewriting code directly in Lua scripts, but it's not something recommended to do outside fullgame environment)

In this stage (and variations) the locomotive doens't show off just the wheels animation.
Tested in 98.1
Worked fine in older Mugen.

already fixed, so should work correctly in upcoming 0.98.2

I did see that's possible in YT. Am i doing something wrong?

; Additional portrait layered under standard ones. Limited to 1 portrait per
; team side. Character that will fight first takes priority (portrait may
; change depending on order selection)

What you've seen on youtube was likely order selection since that's the only thing that can change portrait from normal to "done" variant in versus screen (there is no change for single team mode). Mugen 1.0 screenpack distributed with engine has order selection implemented, so refer to it.

1- How to do for put more time in the selection screen before the stage select, when I choose the P1, the P2 doesn't get to have time enough to do his pose when chosen and it skips to stage select abruptly.

there is no time between character and displaying stage selection at all. It's not its own screen to have dedicated fade or transition times associated with it.

2 - In the member member order select looks like the timer is not being respected, probably I don't put the code in the right section.

refer to data/mugen1/system.def, which has working example of it.
timer.count and timer.framespercount controls displayed time when players have chance to select order and it does work. Total time for displaying versus screen won't be longer than time parameter tho, so you need to edit that one too.

Is possible to organize a scheme to appears names when you make hits in lifebar in a standardized code for all characters automatically?

And using sprites,fonts or animations for these names, it would be marvelous, I hope you get to make it.

And sounds for each name, obviously added in the fight.snd.

I'm not a coder, it's just a thought about how i could imagine these codes, do you think it's impossible?
it's because i would like to find a way to automatize this kinda feature.

Maybe the code could have the name as COMBOPHRASE OR HITPHRASE....any other.

again would be redundant since your idea doesn't bring anything new to the table that is not already covered by LifebarAction sctrl (which by default uses dedicated action.zss file, where you can code whatever you wish)

if this is what i'm searching, how could i do that?

In tag mode when the team members die, their bodies stay on the floor during the rest of battle, how to remove their bodies to remain only the alive characters?

reply to your question by @Kamekaze:
Quote

In the KOF definitive match mugen game, when you win on the winner screen, the fighter speaks a voice with a celebrating the victory.

I'm researching how this is possible in Mugen, since it is much more limited than I.K.E.M.E.N.

Wouldn't it be possible to add an snd.line for this feature?

Your characters need to have this sound added in their SND.FILE to work.


that would be redundant. There are already following parameters implemented for [Victory Screen], [Win Screen], [Survival Results Screen], other modes result screens, as well [Continue Screen] variant (with slightly different names)
Code:
allowing you to choose state that character is forced into during those post game screens. Which is the same thing you suggest but more flexible and powerful (since you not only can trigger some sound but control what character does on screen from within cns/zss code)

@Gacel, it's not offset, see below.

I would like to know if this feature was removed, because it's not working to me.

If animation can be assigned to team1.text element in mugen than it's a missing feature. From what I see in source code ikemen never allowed it to begin with (only text rendered with font).

edit: just tested, it works in mugen, we should implement it for ikemen in this case.

Is the repo accepting PR on adding features in sctrls?

Also a bug report.
The above code works fine in mugen 1.1 but not in IKEMEN.  The color of the explod is not changed when time = 0. I need to change it to the following in order to get it work. I guess it is a problem on the execution sequence?

I have some simple question?

1- How could i do the portraits appears on select, versus or winner screen in a sliding movement?
It causes an emotion impact and surprise.

2- How to do for who on the winner screen the character speaks a voice or phrase to celebrate the victory?

3- how to do on lifebar shows the match number or stage? Example: stage 3 or battle 3 or match 3.

1. refer to system.base.def which lists all available screenpack parameters (search for .slide.speed and .slide.dist). I don't remember how they work, so you will have to experiment yourself. Alternatively you could animate them using character's AIR file and assigning anim instead of spr as portrait.

2. there is no such feature. All lifebar features that didn't exist in mugen are docummented on wiki: https://github.com/K4thos/Ikemen_GO/wiki/Lifebar-features

I think I ran into a bug in Training Mode.  I've got a bunch of slots that are for secret characters until specific unlock criteria is reached.  Until then, they're supposed to be treated as random slots.  When I move the P2 character select icon over these slots in Training Mode, then still act as a random slot, but instead of saying "Random", the character name displayed is the name of the secret character.  Note that I removed the default training character from the config.json file so I could manually select a character to train against.

Also note that I am using a custom motif.

EDIT: I tried a few other modes and it happens there too:

Mazemerald, if you're reporting something always provide a way to reproduce the problem. In this case a link to character that showcases the issue is needed.

As for the tag camera, in next build it will no longer follow defeated team members, if there is still some alive character ready to enter the screen.

The last updatings are awesome...

How can change the option font? Is it possible?

yes, refer to screenpack distributed with engine and system.base.def listing all parameters. Option screen supports the same parameter names as main menu and pause menu (so in this case font parameters prefixed with "menu.item.")

is it possible put the lifebar for the players 1,2,3 at the same position in tag mode and when you change the character the lifebar shifts every energy for every char?

yes, if you use tag system that takes advantage of tagin sctrl "leader" parameter (such as default tag distributed with engine or custom ones based on it). Simply copy [Lifebar] content into [Tag Lifebar] (only p1 and p2 parameters assigned)

In the versus screen 3VS3 tag team is not possible choose the orderselect. is there some problem with this new version 98.1?

I have read the Order select topic, but it seems don't work yet for me, Where would I must put the lines to work correctly? Help us please...

Anyone else got a messed High Score screen after update to 98.1 ?

works as intended but requires renaming parameters. Refer to this commit description:
https://github.com/ikemen-engine/Ikemen_GO-Elecbyte-Screenpack/commit/c49b1be403cea3e663a5528701b0ee76cb7201bb

Please, I have a problem with the scale of portraits in the 0.98 version. To add portraits in the system I use animations in select, versus and winner screens ( p1.face.anim ), I try with spr and works well. The problem it's with characters that have different value of 1 in the size part of the .cns archive:
[Size]
xscale = 1           ;Horizontal scaling factor.
yscale = 1           ;Vertical scaling factor.

In this case, the scale of the character in the .cns file it's 0.3 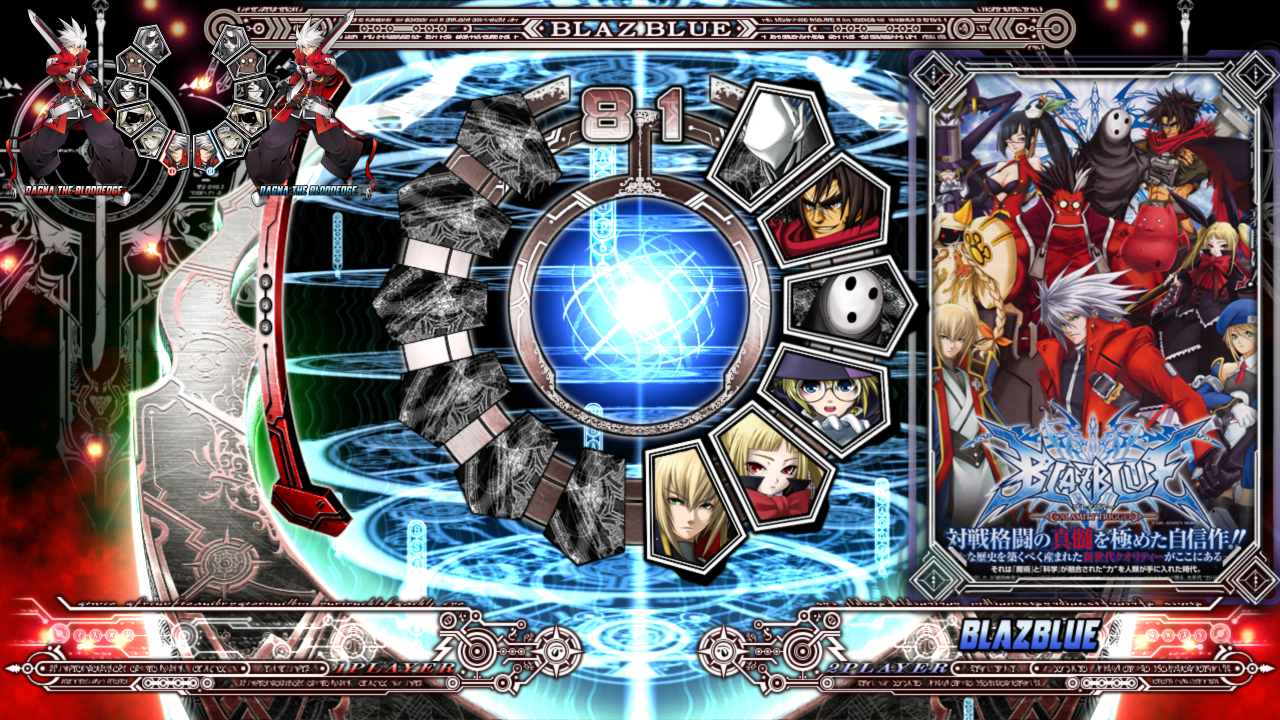 I try to put 1 in the scale and modify the size with localcoord but the char moves strange. Any ay to solve it?

The way it behaves is intentional. By popular demand, preloaded animated portraits now use cns [Size] xscale and yscale values automatically, so stuff like this should no longer happen:

It only affects animations, no sprite portraits.

As for how to deal with it:
1. use normal sprite portrait
2. set custom scale via this parameter: https://github.com/K4thos/Ikemen_GO/wiki/Character-features#portraitscale
(affects all portraits, so your small portrait would change size too)
3. scale your animated portrait in outside program and import it to sff file
4. since this is animation, you can use 8th and 9th AIR parameters for x-scale and y-scale respectively: http://www.elecbyte.com/mugendocs-11b1/air.html

system.base.def does what it says in first few lines of that file (reference of default values and list of all available parameters). It can't be used as is. Other system.def files belong to different Elecbyte screenpacks distributed with engine (same case as in mugen).

EgyLynx, sorry for not responding but I have trouble understanding your questions. Consider writing in your native language and translating it to English with this site: https://translate.google.com/

In my opinion, you don't need to remove the options from inside the .config, as several of these options are already inside it just to make these changes.

Any ideas on how I could fix this in Ikemen?

as far as I know (you have not uploaded stage so I can't test it) it's already fixed in upcoming 0.98 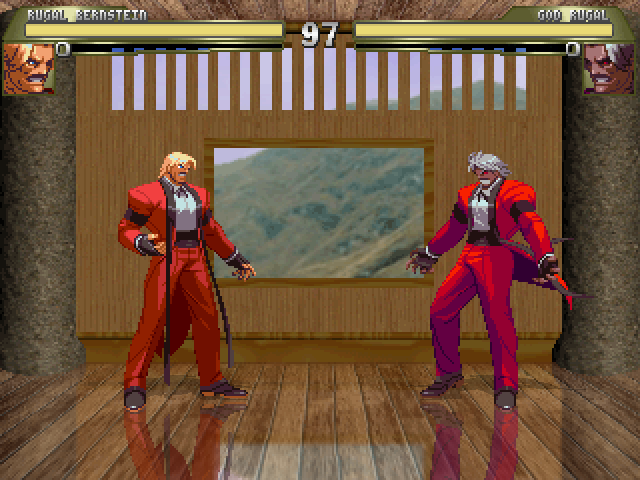 Re: Questions about IKEMEN

Is the tournament mode still in the works?

it was on my todo list but I've lost interest. To much effort to implement something that barely anyone would use (considering it would be offline only because online is limited to 2 players), to awkward to implement via system.def parameters (screenpack customization the way I've planned it would require tens if not hundreds of new parameters).

thank you very much, works great.

@tunglashor, any chance for small update to your tool that would make it compatible with ikemen go? Here is a post that describes the problem:
https://github.com/Windblade-GR01/Ikemen-GO/issues/292#issuecomment-885426703
(ikemen go has motif path configuration in save/config.json, not data/mugen.cfg)

@RagingRowen: of course the issue with art mentioned in my last post is long resolved (thanks to Ruroni).

Guess he finally decided to settle with "KarmaCharmeleon" for all his characters. As for me, I'll be strictly keeping "ZolidSone" as an M.U.G.E.N author and won't be using it anywhere else.

offtopic but since it's a bit jarring seeing Karma referred to as he over and over in this topic, a bit of discord trivia - KarmaCharmeleon is a girl.

Re: Retouched SFF for krauser by "Infinite"

the sff has problems with lifebar face portraits on mugen 1.0:
https://i.imgur.com/v2HI9Tv.png
most likely caused by duplicated palette: 1,1