Re: Gallon/Jon Talbain CS by Obby

Re: Street Fighter I: The King of the Hill

Wow, I'm late. I'll DL the game once I'm at home. unfortunately, I can not talk about coding because I know NOTHING, but about sprites I think I could say one thing or two, constructively.

By the pics, +10 points because you tried to stick as much as possibe to the source game, having Ryu different to Ken(stand) and different to the other Ryu's (Ive seen the screenshots about punches, etc). There are some anatomical inconsitencies(Lee's arm in that air punch is like broken and thrown to the rival), but again, that's a minor thing, specially if the team is only you.

Are you ok with me using that Remy portrait for a future update in my Remy edit?


Of course, be my guest

Well, weekends are mostly for Dimitrescu and portraits. Last weekend I had ZERO  desire to do something because of personal things U_U.

Also, I think I made justice to Viper's SF4 portrait, doesn't it? 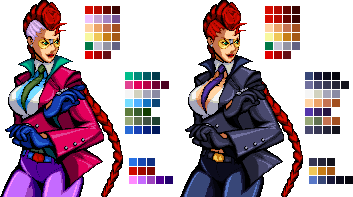 Have a nice day!

Please stop the guessing, we know every silhouette is BAO.

Hi. Just to inform. I'm leaving Shiki for the weekends. During the week I'll work in something a bit easier and I still making myself the question about why no one took it, even being kinda a headswap + few things. I'm talking about Mature. I'm using JMorphMan's Vice, applying a wig on her head for basic stuff. About Mature, I've finished:
- Crouching-crouch animation.
- Run(speciffically Mature's with both her arms open a la Naruto, not as Vice's).
- Turn p1-P2, stance and crouch.
- Dash forward and dash backwards.
- Jump.
- LP, LK, (both stance and crouch). Crouch HK.
- GETHITS: even I did them years ago(you can find at TJun's CvSMature, I'll re-do them.
- I won't do the dodge nor the stance. GRAPHICUS did those time ago and I know I could not do them better. So less work for me.

I know there's a stray pixel in the animation, I've fixed it in the file.

This is what I've finished this week. After a health collapse(I'm a bit better now, only my eyelid gets crazy from time to time), I can't do something more complex. That's why I chose Mature, since is mostly adding a wig.

Reason of collapse:
Spoiler, click to toggle visibilty
- Working around 10 hours/day. Not specially big salary, but Spain, you know.
- VERY worried about my chinchilla pet, he's hospitalized since last week. And yesterday received the results of the last analysis. Not good U_U.
- Sleep 5 hours.
- Study for an exam.
Also:

- SHIKI: I'll make a bigger update to the whole sheet. Even I went to the lazy path, I'm decided to make a big improvement, mostly in folds, CS. I'll also erase the black tattoo from her back, leaving ONLY the snake on it, as SamSho2019.

So I'm sorry if I'm deceiving someone. I simply can not give more of myself.

- LADY DIMITRESCU: Potem gladly help me filling some holes in her walking animation via an AI and it looks smooth as Hell now. I'm using layers in photoshop for  doing those at least in a raw way, so I'll be adding details. Once that is finished I'll go for the back walk which seems to be easier(I'll makeit as relaxed, sitting in her daughters' flies, like taking a nap)

Have a nice day.

Thanks for the kind words, people. This type of portraits helps me to calm down, specially in these days.

- Ingrid: Of course, she had this very same artwork in SFZ, but in picture, not pixel. So I translated it as best as I could:

- Remy: For him it was a bit more complex. I used one of his grey/blak&white sketches torso+legs, and then I did a head from scratch That's why I added the sketchy thing. Added the hair et voilà, our favourite French(till Manon arrives) est icí: 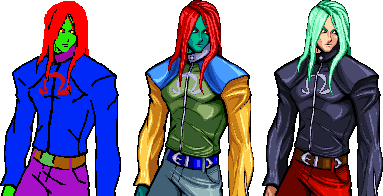 Of course, all these select portraits have their CS applied to them. Dunno why! But I like to make them this way.

Have a nice day!

Imagine that you are a good mugen creator(no matter if a coder or a spriter) and then a random duuuude appears in youtube showing "his" project which happens to be made out of previous characters(the guy just do CS and story for characters plus adding more comboablity, that's all, not the big thing).
Let's say this guy is using Karmachameleon's coding and Bernhazard's sprites. Same using someone's Shingo with Dampir's sprites, Jmorphman's Chun Li coding with some spritesI did. This rings a bell in a random guy who wants to know if the guy accepts commissions. Then this "creator" says his prizes aren't cheap.

Would you like that a random MF use YOUR stuff to gain money? Of course not. Well, this very same case is happening. See in Youtube, a former member of this very same community is doing that wrong shit. And beware if you appear to warn people about the true. This very same duuuude will try to sue you because you are "harassing" him.

Not a drama, just a matter of RESPECTING everyone's time and effort.

Is crediting MUGEN character's code bad? (Let me know please in the replies)

Is not bad, is correct and must be do by people who uses other people's creations. It also applies to sprites and such.

I thought I wrote in English, sorry

For the Scorpion Kick, look how Zafina deals with. In tekken, she makes a short cartwheel advancing towards the rival and then kicking with a similar movement. Or you can make differnet, using Claw's from SvC and instead of a punch-claw, a side kick, even not having the same style than from the in game.

Awesome!! I'd suggest you to move Brian's left heel a bit upper to give the impression of having strenght in that kick and not ust moving ahead. Are you using Sodom or Birdie for him?

Small update. Just added the sunglasses and did th palete for her second outfit in SF6

I of course, took some freedom. Swapped French flag in her legs for golden details because it uses 3 tones instead of the surrounding 4. This also helps meto have something to fill the area AND using the colour sheloves the most: GOLD!

Not in my best emotional days, but pixels are there for helping:

As you can see, it allows to do(kinda) her 2nd outfit)

Not in my best emotional days, but pixels are there for helping:

As you can see, it allows to do(kinda) her 2nd outfit)

Re: Random animations for practice.

Abel is still in my plans, Idk if I should go with Chuchos sprite or try to improve ir or make my own design for him.


If it works for you, I already have a base. And all the gethits finished, but they're not entirely "cvs" more my style than else...

Ohhh can I see them?

Re: Random animations for practice.

Abel is still in my plans, Idk if I should go with Chuchos sprite or try to improve ir or make my own design for him.