Rat City is a gathering of alleys in New York where bums and the homeless live. Spawn becomes "King of Rat City" after takes down street gangs and organized crime in a brutal fashion.
The stage brings super jump, animation, looped BGM, 1.1 (zoom & no zoom) and 1.0 option files. 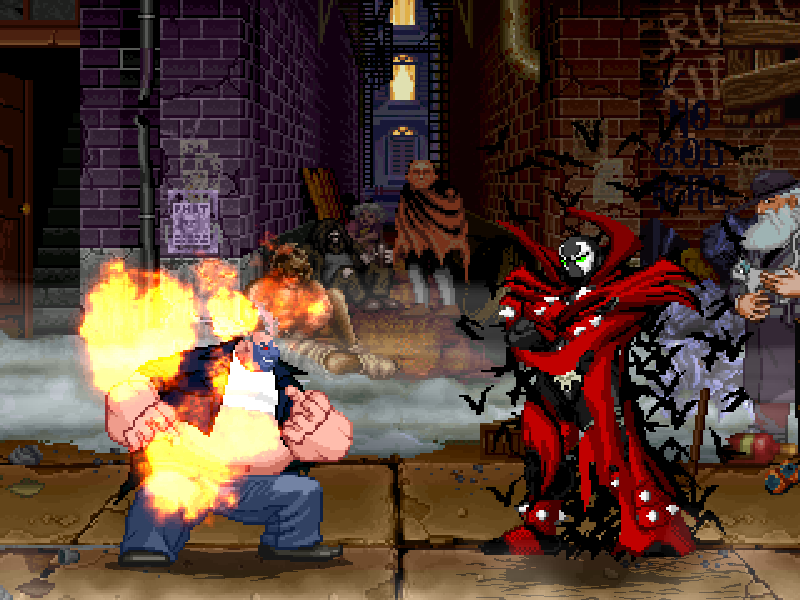 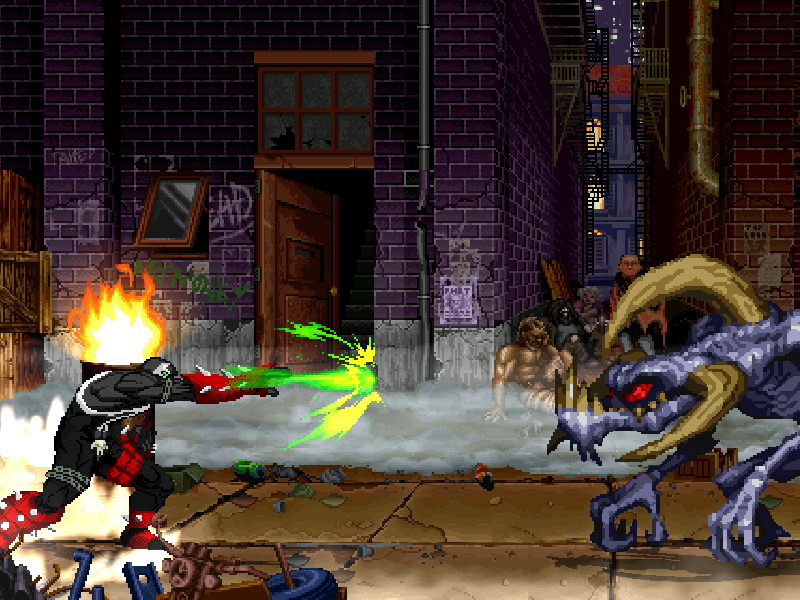 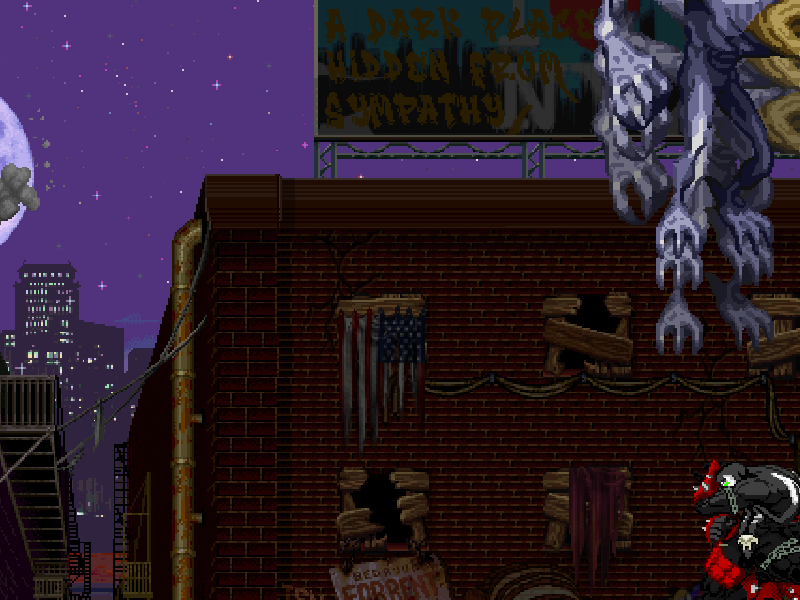 Both did a great job. Everything looks good and funny. The nostalgia attacks me and brings back great memories of the series.
El char se ve buenísimo.
Thanks for sharing.

Thank you guys for the support and the nice comments.

Re: Technodrome Arena by Vegaz

I was hoping to find some 3D effect on the Statue of Liberty, but no doubt that parallax and deltas are killing. All finely executed.

Again a nice and successful mix of resources. Good job.

Stage heavily inspired by the first chapter of the game "MARVEL's Avengers".
It has super jump, animation, looped BGM, 1.1 (zoom & no zoom) and 1.0 option files. 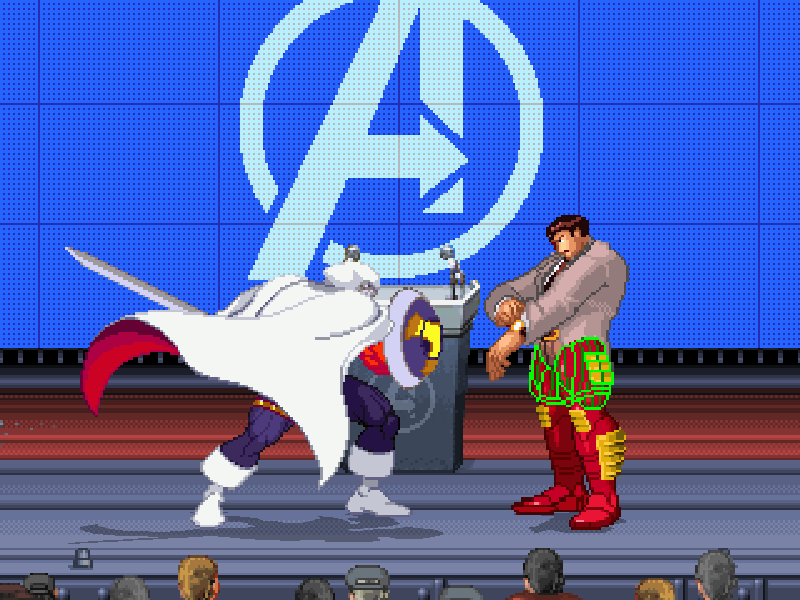 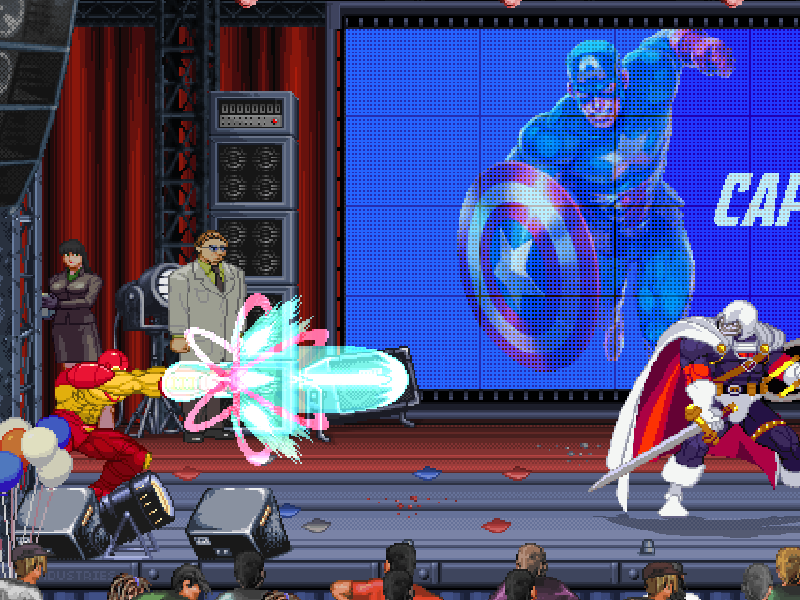 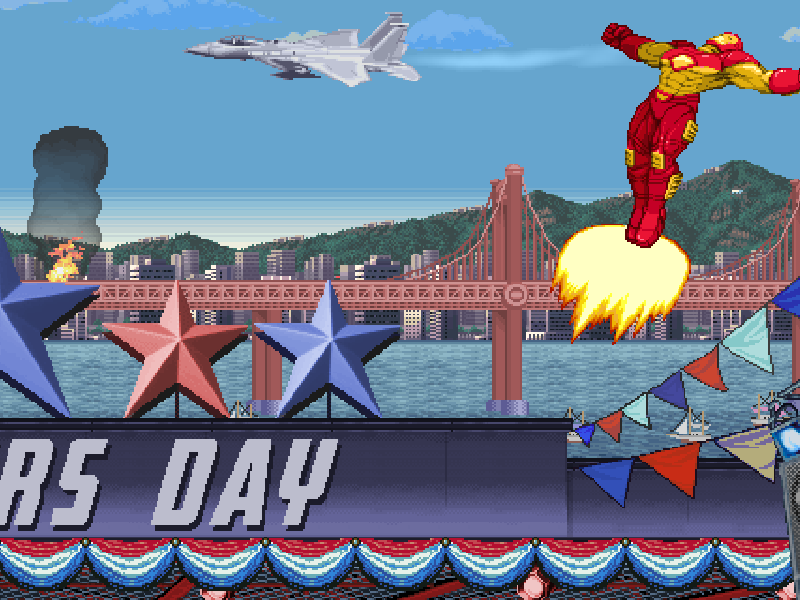 I've been checking the link and I found a lot of great things. I'm tempted to put something together for Halloween.
Nice work and thanks for sharing. 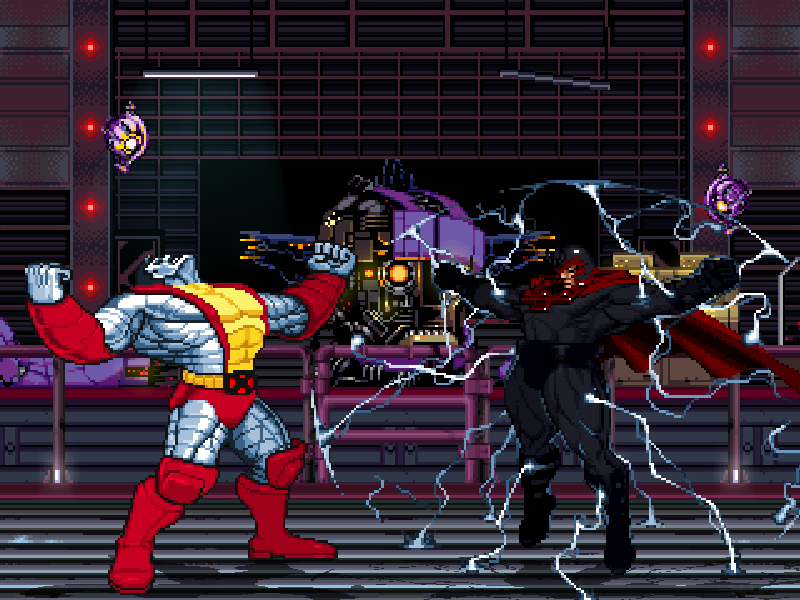 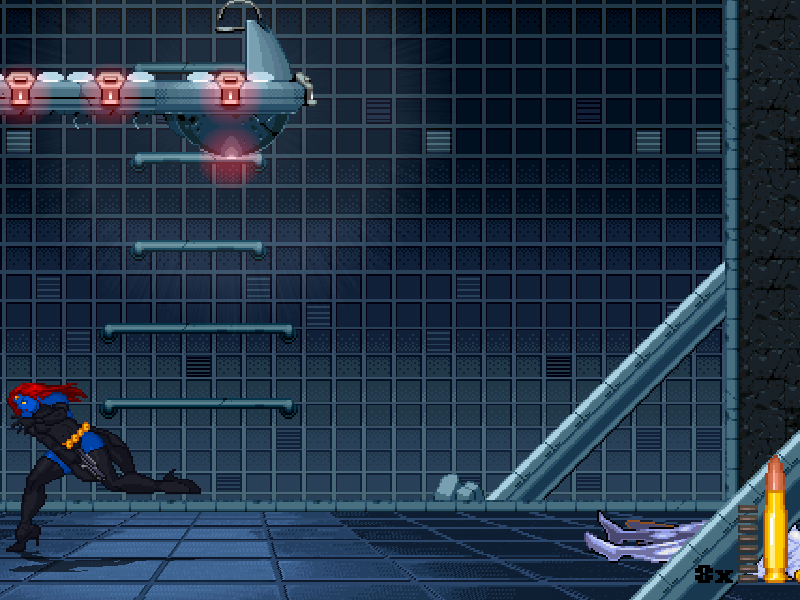 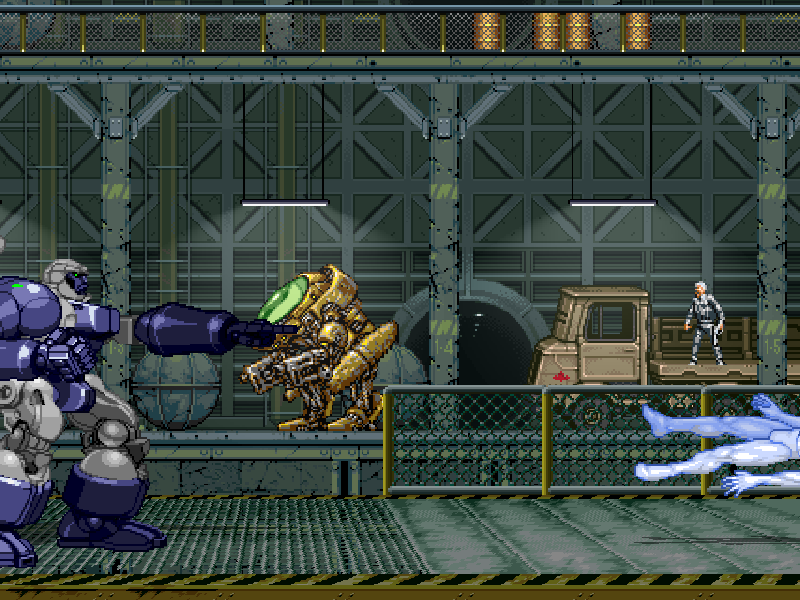 That was really, really good. I get a smile like I'm watching the old show.
Do you plan to add some helpers like Quico, Chilindrina, Ñoño, I die

You're right, I didn't realize it, but there are a couple of pixels that seem to be in the right place.

I know it’s not X Men but I put that communication room stage as Terminator’s stage in my roster since I don’t like any of the stages based on Skynet so far. Fits really well

I remember extracting some sprites from the SNES Terminator 2 game, maybe I'll check them out for similar treatment.

No hard feelings bro. I'm honored you considered my work. We're all just reusing sprites from somewhere else. That's the foundation of mugen really. We've been robbing Capcom, Snk and the others for years. 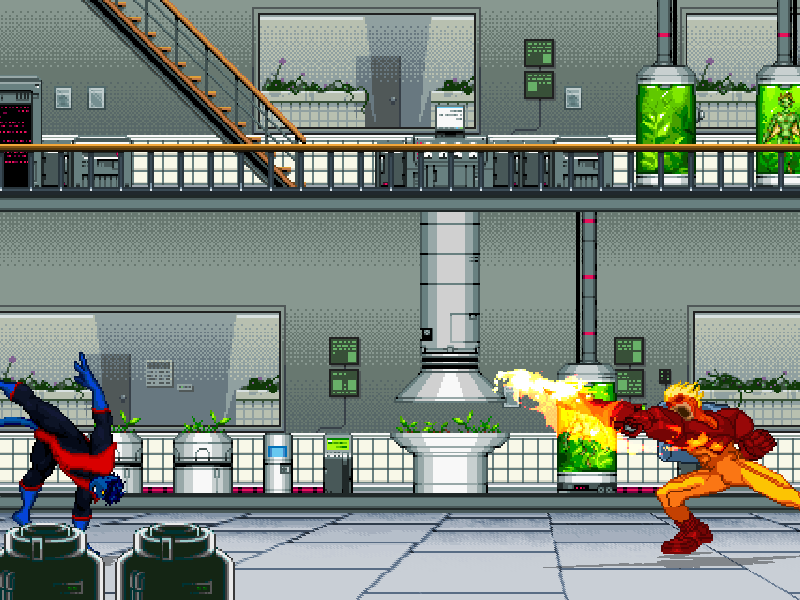 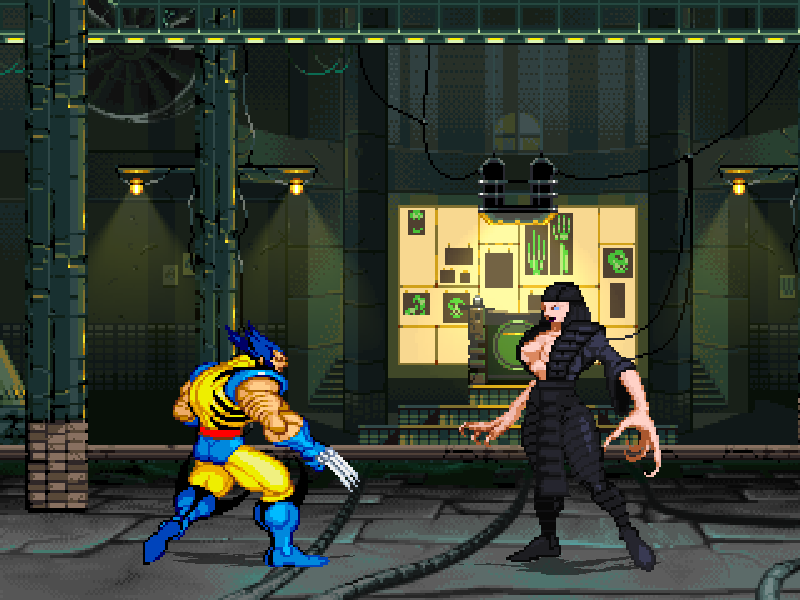 I had to do some research to see what this was about. I'm not completely sure but I can imagine. My intention is not to open controversy or drama here, this thread is about something else, but I am going to explain myself because at some point it involves me.

- I'm not "mg", in fact someone with the same name contacted me a week ago to commission a couple of stages.
- With all this I realized that you are using and modifying some of my stages. I don't like it but it's not a problem, I've seen it before and I constantly see that the same happens to other creators. So I guess that's the rules of the MUGEN community.
- And in order not to be hypocritical, I started by sharing zoomed editions of some stages without the consent of the original authors (some who suffered me at that time were EXShadow, Vegaz_Parreli, Magus, Dev, Reginuken, Yasuke, AVPboy, and others that in this moment I don't remember). Over time I realized that it is not good to do this kind of thing without the approval of the creators. And without being a policeman, it is up to each one to have a respectful behavior about the work of others.

Sorry, I wanted to be quick and ended up spreading a lot.

The first stage reminds me of the Lunar Wolf fight from Mischief Makers, minus the fence.

I must to google that. You are right there is a similarity.
Spoiler, click to toggle visibilty

I love the nightlife you gave them.

Another example of an aesthetically cared stage rework.
Very nice.

Re: NexT OnE released Silent Swamp

Very good. There could be more variety in the background landscape, beyond that graphically it is beautiful.
Thanks.

Re: Club Illusions(Updated) by Vegaz

It looks good and fun, you managed to put together a great nigth club.

And I miss drinking in a bar too much.

Interesting. I'd love to see where all this is going.
Buena suerte.

What a nice job! Keep the hard work pal, it's looks really cool so far.