Re: Character of the Month: November 2021 Voting

Posted by Professor Voodoo  in Character of the Month: November 2021 Voting (Started by Jmorphman December 20, 2021, 10:16:30 PM
Board: Contributions of the Month

Posted by Professor Voodoo  in Death Battle (And sprite fight animations) (Started by Long John Killer April 09, 2015, 03:59:16 AM
Board: Entertainment

I am surprised it took them this long to put Saitama in a match. Along with Goku, Naruto, and Ichigo, he's one of the most (over)used characters on VS debate forums....

Re: What R U listening to right now?

Here's another one I listened to recently.

Hit me in the feels.

Re: Character of the Month: November 2021 Nominations

Posted by Professor Voodoo  in Character of the Month: November 2021 Nominations (Started by Jmorphman December 03, 2021, 10:30:34 PM
Board: Contributions of the Month

Yep, it looks like WWE is really starting to turn into either WCW in the 2000s or TNA in...I guess in the days of Hogan and Bischoff being in charge long ago (I believe in 2010 or something).

Yeah, with a couple exceptions (like Roman Reigns, and even he runs the risk of getting stale), WWE is well below 2000s WCW rn.

The crowds have been browbeaten into submissive silence....

On another note, NXT's doing their WarGames show.  Normally I wouldn't give three shits (why invest time in NXT when the wrestlers will be bungled on RAW/SmackDown?), but the Old Guard vs NXT 2.0 Wargames match looks legit fun.....

Tommy Wiseau is a treasure.

Re: Favorite AI vs AI matches to watch?

Dude, these all rock! Rei vs Riesbyfe was nuts!

I'd also like to classify the Mega Drive port of World Heroes a honourable mention.

I may looks accurate in stills, but it's a true mess when you play. Specials barely come out, going from stand to crouch and vice versa is a hassle (Sometimes you go into crouch at random), Cheap AI, and so on,

There is a whole YT series on bad fighting games done by this guy. He is very reasonable in his critique-coms.

Re: My Fighting game art / portraits : for my birthday

Dude these are sick, deffo following!

I think I played almost any fighting game released (or not)
And some fan games, doujin games unreleased ones etc.
Tons and tons of bad games exist. perhaps 30% of what I played...

I'm ok with all your choices.

Let me add one I particularly felt horrible.

I usually try my best to complete a fighting  game.
Even if it's ugly, have horrible sound / music or horrible gameplay.

But this one is an absolute masterpiece.
It can take you 20-30 minutes or more to beat a simple CPU opponent.
Really limited moves, stupid animations, unfair AI.

I tried my best to beat 3 characters by using some cheap moves then I gave up...

As it says on the tin. Post your favorite AI vs AI matchups. 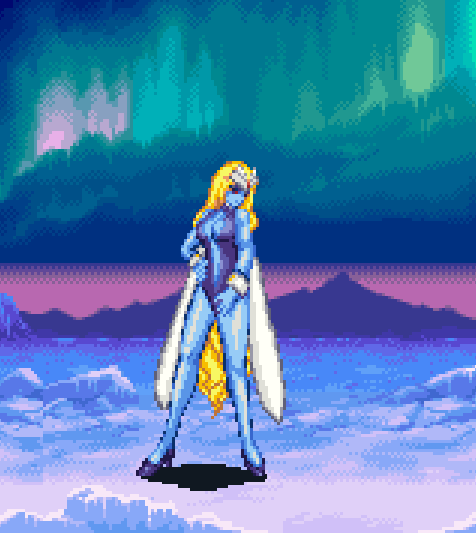 Some admirable choices. I'll throw in another dishonorable mention that slipped thru the cracks. Kabuki Warriors for the OG XBOX.

To quote Andy McNamara,  "I literally won a match just bashing the controller against my ass. I wish I was joking, but the score is seriously Kabuki Warriors zero, my ass one."

The worst fighting game to ever exist...

So I read multiple "worst fighting games" threads on this very forum that date back about a decade. Multiple people voted for multiple games. Quite a lot are shit. However, there was ONE glaring omission, which is somewhat understandable, given its extreme obscurity (I wouldn't have known about it if not for the Gamer's Edition of Guinness World Records.) One omission that, imo, stands above the rest.

Can anyone top this?

Also for (likely) second place....(I don't think this one was mentioned either....)

Re: What R U listening to right now?

The Dillinger Escape Plan - One Of Us Is The Killer    https://www.youtube.com/watch?v=qgcUiM7queQ

Posted by Professor Voodoo  in Death Battle (And sprite fight animations) (Started by Long John Killer April 09, 2015, 03:59:16 AM
Board: Entertainment

Owing to extreme desensitization due to being in battle forums where damn near EVERY match uses mainstream Shonen characters (Goku, Naruto, Ichigo, Luffy) and 1 seinen character (Saitama), I'm fairly apathetic towards Madara vs Aizen, tho the animation will likely be fun to watch....
Page 1 of 21 2 >