Does this have high jump or zoom

It got high jump, no zoom. 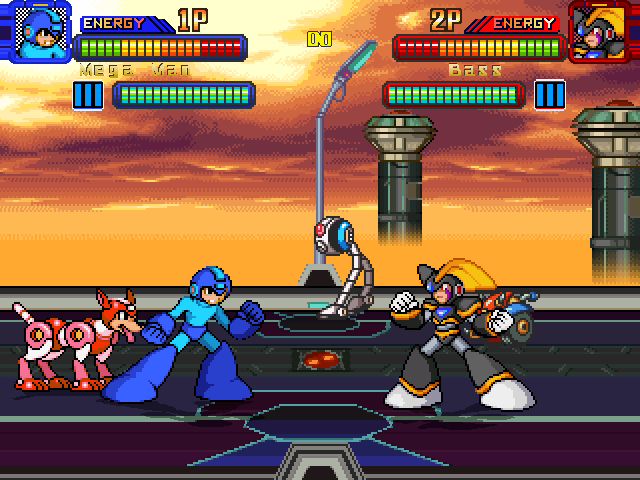 This stage was done quite some time ago but I was unable to release it back then for reasons. Anyway, this is an original stage based on the first final stage from Mega Man X7. Enjoy!

Re: Arcade Mode in Modern Fighting Games? Is it worth it? What are your thoughts?

Posted by Magma MK-II  in Arcade Mode in Modern Fighting Games? Is it worth it? What are your thoughts?  (Started by The Shakunetsu April 15, 2022, 06:58:40 PM
Board: Fighting Games

Now, to my point. Arcade mode is a simple and basic addition that allows you to play a single character for multiple matches if you don't care or are unable to go online. No other mode so far in fighting games has shown to be able to offer this, because even Survival modes end up being endless or even boring, so instead of completing something, you just end up mindlessly playing until you either drop it because you're sick of it or because you're defeated, which is definitely not ideal. I strongly support big story modes in fighting games to establish a canon story and something interesting to follow about the games (even though most franchises seem unable use the feature to tell an actually good story), however, since they limit who you play it at which time, they don't come even close to be a replacement to Arcade.

Also, I sincerely doubt something as basic as Arcade mode takes that many resources to make, that excuse is bullshit, and, lastly, anyone who says it shouldn't exist because of online can fuck right off, these are the kind of people who think they're big shit because they won a few matches online and don't like the idea of anyone having fun in a different way than they do, thats not how the world works, games like Soul Calibur 6 are proof that offline content is more than capable of making a game successful, because there IS a market for that and there is literally no reason for said market to be neglected.

I realy enjoy the Arcade Mode in most fighting games, I like to see the Individual Storys of the characters and their endings even if it is just a "What if" or if only parts of the ending become canon in the end.

To be honest many characters are not only liked because of gameplay and moveset but also because of their story, because the story is what gives them "live" and turns then into characters in the first place.

Also as a personal note, unlike in the 90's I don't have any friends anymore who enjoy fighting games, when I was still a child I would just play games like Street Fighter II with friends on the SNES, and to be honest I don't like it to play online against random people, feels not right.

I personally think that Arcade mode should be a staple for ALL fighting games on the home console. How you do it depends on what you are aiming for.

Do you want to combine Arcade and Story? There are games that do just that and others that separate Arcade from Story.

Now, why an arcade mode? Well, people want to have fun with the game without the pressure of having to face someone online in a game that you might not be good at.

Not really combine, but there was popular criticism that arcade mode is pointless because it's just another short version of story mode.

Well, of course there's criticism. 99% of the arcade mode endings are non-canon.
As long as there's a final boss at the end of a game, arcade modes should be avoided as much as possible if a story mode is present.

Hell no dude. You need those offline modes, and like I said before these story modes are no substitutes to the traditional arcade mode. Most people who actually buy these (or any other) games are casuals, and if Street Fighter V's disastrous launch proved anything is that focusing entirely on the competitive crowd at the detriment of causal players is the wrong way to go.

Like it or not, sports games are still among the top selling games every year, which shows that the money is with the casuals, not with the hardcore players.

Re: Arcade Mode in Modern Fighting Games? Is it worth it? What are your thoughts?

Posted by Magma MK-II  in Arcade Mode in Modern Fighting Games? Is it worth it? What are your thoughts?  (Started by The Shakunetsu April 15, 2022, 06:58:40 PM
Board: Fighting Games

No, please no. Those "cinematic" story modes not only suck balls, they shouldn't become the new standard. Not only they only focus on a handful of characters to the detriment of everyone else (just look at the MK story modes and even SFV, which turn every antagonist into a jobber), the also have zero replay value, once you beat it you have no reason to play it again. Heck, you can just watch a playthrough of it on youtube and you'll get the same experience.

Sorry but these cinematic modes are no substitutes for an arcade ladder, where you can actually see each character's individual stories and which has actual replay value. Plus if one wants to play casually the Arcade mode is still they way to go.

Not holding my breath for N'Doul due to the way he works, and I'd rather not have Pet Shop as well. So that'd leave us with eight characters ported from EoH.

Re: Petition to bring Capcom Fighting All-Stars back. Seriously.

Posted by Magma MK-II  in Petition to bring Capcom Fighting All-Stars back, cuz why not? (Started by NDSilva February 23, 2022, 09:00:50 PM
Board: Fighting Games

That's assuming they even have any working build of the game to begin with.

It'd be cool if they made a 3D Fighting Collection with their 3D fighting games like Rival Schools and Star Gladiator.

Those would probably be harder to emulate, so they're playing it safe with the CPS2/3 stuff.

It might be - Star Gladiator and Rival Schools were on the ZN-1 hardware, Plasma Sword was on ZN-2 hardware and both Power Stone games and Project Justice were on Naomi hardware.

That's three different platforms that haven't been emulated yet on current gen hardware.

They could always go with the ports of those games, which were on the PlayStation and Dreamcast.

It'd be cool if they made a 3D Fighting Collection with their 3D fighting games like Rival Schools and Star Gladiator.

Here's some of my wishes:

*PLEASE have the story be set after 3rd Strike. Its about damn time the story start moving forward again.
*Bring back the World Warrior tournament. Enough of watching the characters wandering around.
*No "cinematic" story mode please. Either give us a traditional arcade ladder or a story mode separated in chapters where all characters can get a chance to shine. And please have the characters actually interact with each other.
*Have the roster be a good mix of characters from all previous games with one or two newcomers. I'd really like to see some SF1 rep in a redesigned form.
*Give a rest to some of the series staples like Chun-Li and Zangief. I KNOW they're popular and all but honestly the series needs some fresh air.

The embargo is lifted already, and people already got their pre-orders anyway.

Video from the official SNK channel:

Its very likely these two teams were originally meant to be in the base roster, but they decided to change their plans due to everything that happened (it would probably mean another delay and skipping the current release date).

You guys know that the 4 DLC teams (presumably, year one of DLC, maybe year two as well) have been datamined since the second beta?

Seriously, why people are treating this as if it is 100% official and set in stone? Those names are just placeholders and don't really mean the dlc is set in stone.

Remember how people datamined MK11 and it said Ash from Evil Dead was gonna be in the game (there were even sound files in the data), yet he never appeared in the game. The same also happened with MvC3 (datamined said Doc Ock would be in) and MvCI (same thing but with Gill).

If Rock Howard is in, any in KOF can happen by the power writing and time traveling. 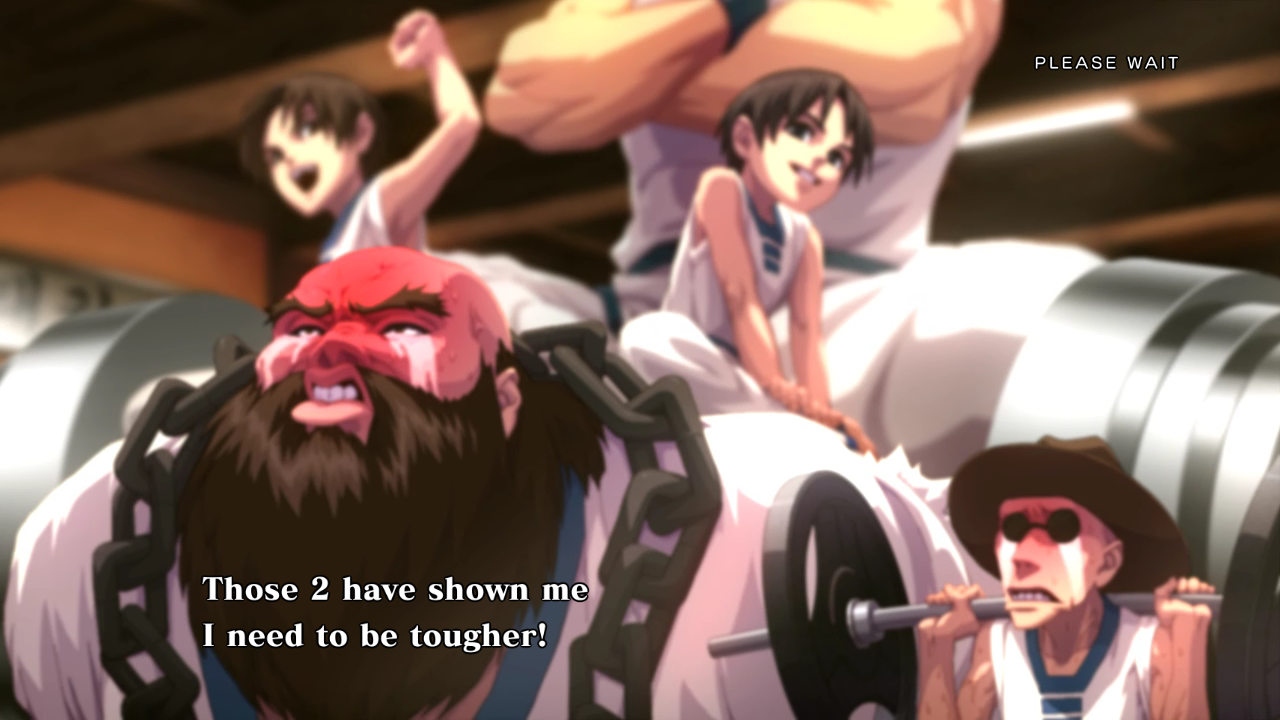 Besides, there's no point in having them while having Kim at the same time. One of them is literally just Kim with another name both in character and gameplay.

SNK will use the same season pass model they used with Samurai Shodown.

That's it, that's what a story mode in a fighting game is. I have zero expectation for any story mode like the latest SF and MK and whatever.