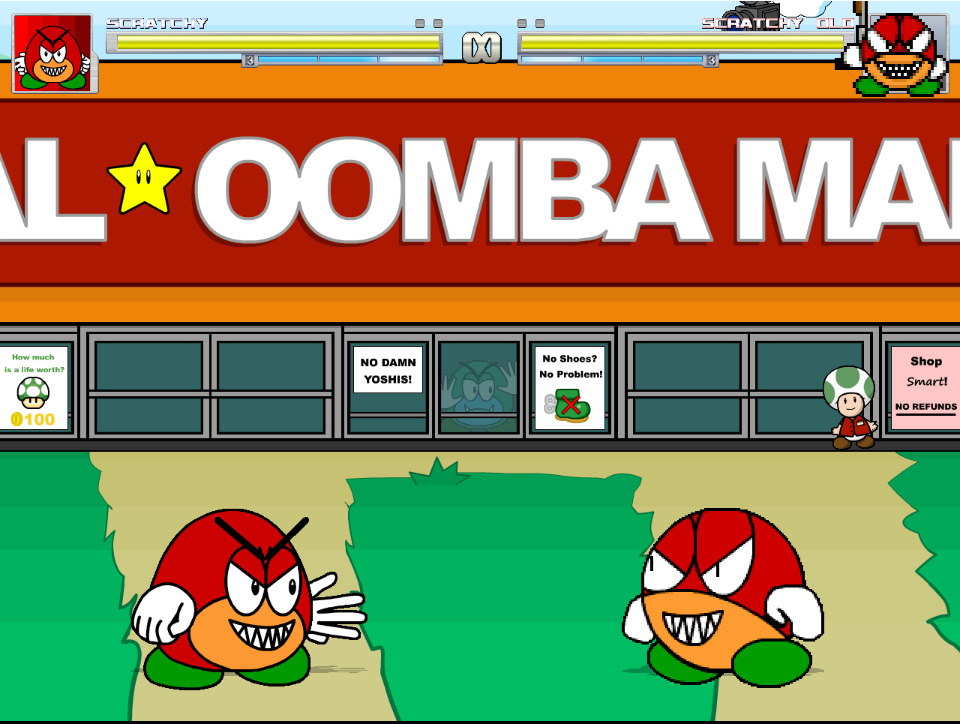 Heavy Punch has been split into two distinct attacks; a low attack and a high attack
New Heavy Kick
New Sweep Move
Tangle Fury's range has been greatly extended and bug fixed
Scratchy gets to keep his doublejump unlike Gombie but it will feel noticeably different.

As before the palettes are based on Scratchy's tree leaves

A Playtips file has been included.
3 remade Gombie comics are included. For the small audience who appreciates this, these are indeed the ones to read directly after the ones included in the Gombie remake.

The new remade stage comes with a unique music track I commissioned just for it. "Scratchy's Theme"

I never used var before so that definitely wouldnt have occurred to me.

So when you say trigger2 could work do you mean as simple change as this could work?

Im pretty sure I was told once that trigger number listings were basically just aesthetic but maybe they meant just most of the time?


The real entire code block currently looks like this.


Is this the var revision youre suggesting?

I assume the blank line between the 2 triggers is deliberate or were just seperating them to be clearer for me to read?


2. Does adding a second trigger line under the first line such as

Does adding that second line cause any contradiction or does it do what I think it does and just increases the chances of move activation when the p2 character is further out?

Is axis the plus sign in fighter factory or is it based on something else?

New character is almost ready for release but I still havent got past the resize messing up the AI hurdle. I googled what I could about the code but I need clarification on a few points.


Does resizing a character using localcoordinates mess with the p2bodydist calculation?
For example if I had a large character shrunk down with localcoordinates does the required pixels no longer equate? Do I need the equivalent of 3 pixels just to make 1 pixel according to the code? Like does KFM 720 for example now go based on the size of a pixel from his enormous sprite or is always using the same metric regardless of sprite size?

Also confused about width. I notice they have a front and back width. does this mean the real width is the combined of both with the players center being the starting point heading to left and right?

and if Im using p2dist in the AI do I need to start counting from the edge of my width instead of the character's center? What I really desire out of all this is how to calculate how many full character body widths the opponent is from my resized huge sprite character.

I want to add multiple random KO noises instead of just the standard 11,0 KO sound.
But looking in the code I couldnt find 11,0 mentioned anywhere so I assumed it was one of those things that was hidden in mugen's common cns that Id have to copy paste in.

I checked there but I couldnt find the accompanying code.

If that is it. I dont know what Im looking at.

Finally reached the point where Im ready to hire a coder for my new release.

This is a remake of an old character and for the most part you'll just be matching his functionality to the original version. I added bigger sprites and reset the scaling and pretty much everything broke. So for the most part if you take the job you'll be doing realignments, but there is some new stuff for the character I'll be wanting as well such as a custom double jump animation and new sweep move that changes velocities and one of the Supers needs to have its functionally changed from a weird juggle to more like an inescapable throw. If the AI needs realigning then I want that too. The guts of the AI and basically everything are already in there for you to work with. I want some other minor things as well but hopefully they wont be too hard.
I'll screenshare with Skype or even draw you diagrams if you need them to help you understand what I want.

It's hard for me to guess how long this would theoretically take. The original coder built the entire character from scratch in like 3 hours but Im not going to hold you to that standard, but if you think it'll take you more than 2 weeks I'd rather just hire someone else. Im pretty laid back when working with someone as long as they keep a clear line of communication open.

I'll pay you 100 bucks through paypal upon completion. PM me or just straight hit me up on Facebook

Thank you. Both worked but I was curious why the default 410 wasnt working and apparently all I needed to do was change

The crouch related animation absolutely exists but for some reason wont trigger. I think POTS mustve deleted the crouch related code back when I hired him in 2009ish because I didnt have a crouch animation back then and probably told him it wasnt needed. Now that Ive made one like I made one for my last character it doesnt work

Anyway this is how the code segment currently looks.

How do I repair it to a more normal state?


whenever I try to perform the move it just performs regular strong punch. I dont remember doing anything different when I added a new crouch move variant to the last character so I think it might be related to the fact that I cant enter the crouch state?

Okay I think I get it. I see in the .def file that it is in fact using common.cns

As for copying statedef 50 in your example are you saying if the same statedef exists in both files the one in charactername.cns will take priority?

I really doubt POTS gutted the character all those years ago when he coded it. I must be missing something super obvious.

So I want to have a custom jump animation for anytime the character double jumps and for a second I thought it was going to be easy but then besides not working a bunch of weird things started happening.

I'll try to be as descriptive as possible.

So since anim 44 wasnt being used I thought that would be a good anim to map the doublejump to but when I did that something weird happened.

Jump Neutral started just naturally rolling over into anim 44 as soon as the anim hit the last frame. I couldnt find anything in the code telling the jump animation to change from 41 to 44 and if 44 doesnt exist the jump animation works properly. I tried a different animation 45 and then noticed forward jump now naturally rolled over into animation 45 and same if I changed it to 46 with the back jump animation. Still couldnt find anything in the code but I doubt its a coincidence that anims 44-46 lines up with the different jump directions.

I tried googling for similar problems but it seems people were told to just make a custom jump state. I have no idea how to do that though.

All I really want is for airjump neutral back and forward all to go straight to a singular animation.


This sets everything out of whack.

Is there a mathematical formula I can use to correct the character to feel spot on like it's old self or do I have to just tinker until I get close as I can which is what I did last time around?

Here is the basic lowdown.

I tried to address Hi-yo's concerns. Heat and Hardy now go off a bit faster and function a bit better than they did before.
I removed the gain power back from all the Supers.
I increased the pushback from some moves but not too much. I wanted qk qk hk combo to still be just barely possible.
Animation glitch in the reverse throw fixed.
Damage penalty for physically attacking the Shock helper increased plus Shocked state effect added to the penalty.
Gombie now doesnt lose a bar if his Summon gets canceled before the Summoned character actually appears
The Mace Super now has Superpause and also and extra startup frame to give you time to block.
Some moves were missing poweradd that should have had them. I fixed it.
The AI will now actually summon Heat and Hardy instead of strictly the other 2.
Gombie is now compatible with Anakaris's Mascot transformation
Gombie now has a Seppuku animation compatible with 3ha's Bishamon character.
If he didnt have Zabel's Hell Dunk and Lei Lei's Flattened compatibility before that's in there too.
If he didnt have the "Vs Weird" and "Feigning ignorance" intros he has them now though the latter has barely any compatibility at the moment.
Upgraded Intro compatibility list (never be truly complete)
Good chunk of sprites have been cleaned.

Thank you, that put me on the right track.

I suspected sprpriority could be the problem but I was apparently looking in the wrong place. The actual code was in the throw attempt section.

I have no idea what this code bit was but when I changed that -1 to a 4 it fixed it.

I've updated my character quite a bit but one of the things I would like to fix before a rerelease is this animation error while doing the reverse throw. I assume it must be a simple fix; a line of code forcing the player animation to be on top but I wouldnt know what that would be or where to insert it.

So when doing the normal version of the throw it looks fine. Gombie's hand is clearly in front of the grabbed opponent. 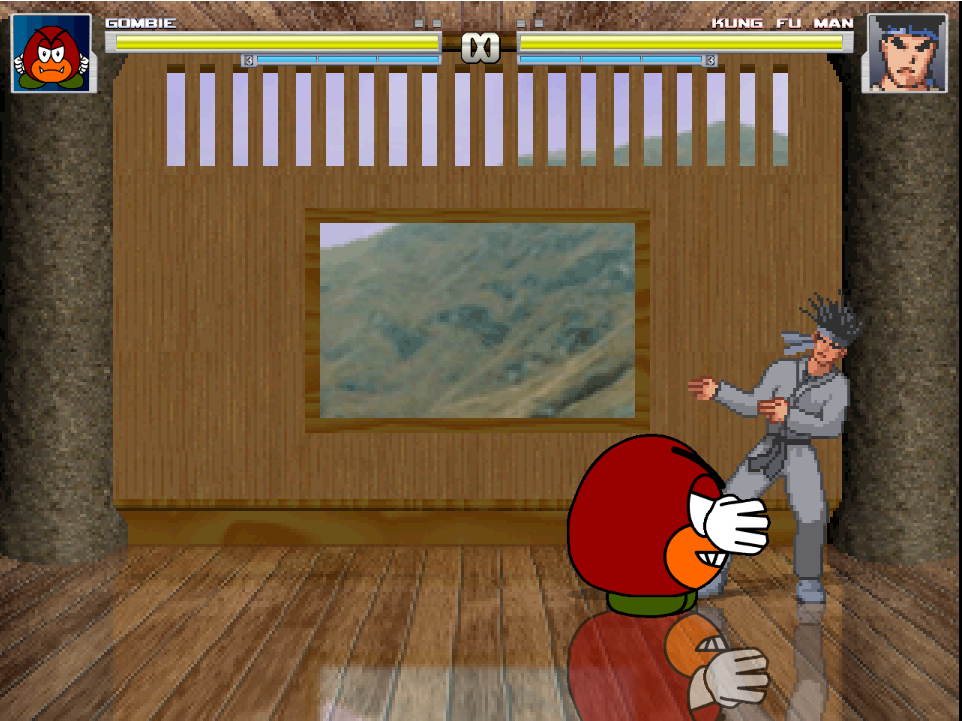 But when you do the reverse version by holding back the player is now behind the opponent which I absolutely dont want. 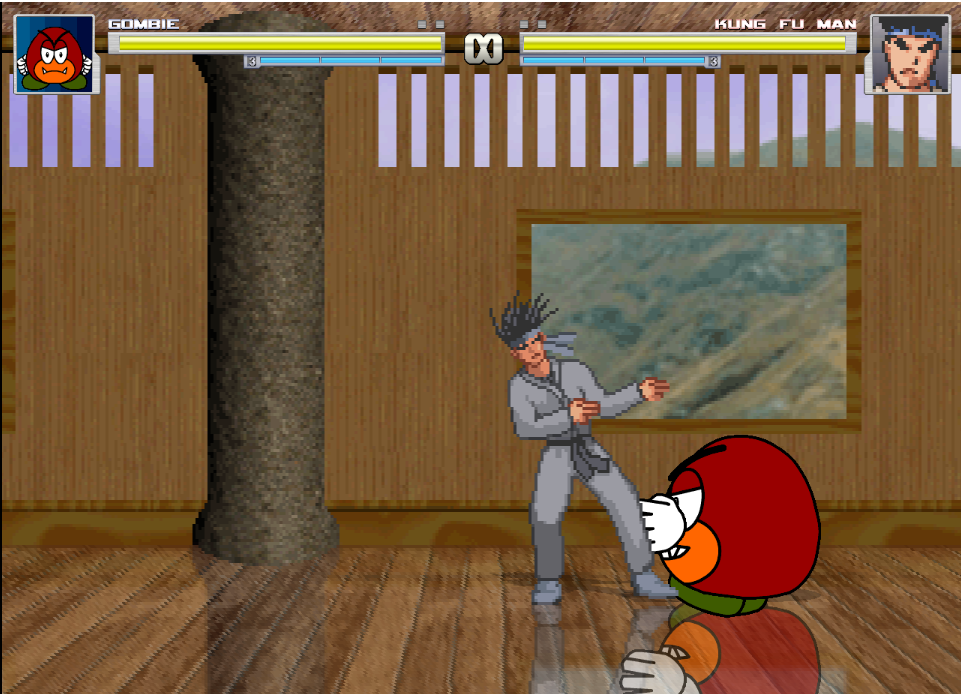 Here is what I think all the relevant code is.


Any help is appreciated

No that's okay, I just wanted to know if that was interfering. Im still not clear if writing enemy before backedgedist changes the context of backedgedist or does it mean the player character's facing regardless.

Okay, so I understand the getpower and givepower triggers.

But is there a way to code into a character a universal getpower percentage ratio increase from damage?

So for example no matter what computer character is doing the damage the player character just receives a natural 20% more poweradd than normal?

So writing enemy,frontedgedist is what I want if I want it to go off when p2 approaches left side of the screen when p1 is facing right?

and lastly does the "enemy" treat helpers and projectiles like as if they were the enemy cause that could be what's throwing me.

changing it to enemy,frontedgedist seems to be getting the same result as enemy,backedgedist but there is almost always a helper in play during my tests so...

Okay I pretty much get it now, One last question

that does mean p1(left side) will activate move when p2 crosses the threshold into the left side of the screen?

or does writing "enemy," before backedgedist means that backedgedist now becomes flipped to the enemy's behind wall and what I should be writing is frontedgedist?

Because right now it seems like it's consistently triggering when the opponent is on the right edge of the screen, but maybe Im just underestimating how big a window  (enemy,backedgedist =[30,100]) is