This shit AGAIN. Oh my god. I already gave you what you wanted, what more could you possibly want?

None of that is final, his voice is even still Kyo's! And the missing comedic pratfall sound is sorely missed, but it'll be in the final version!

Shingo is still currently in progress; I've finished all his sprites, and also updated Kyo in order to fix hitbox and velocity errors (these stem from a miscalculation in the CheatEngine script that grabs data from CvS2). Now that Kyo is all fixed, he can be used as a base to actually code Shingo. I'm currently finishing up the animations and hitboxes and from there it'll be the actual "coding" part, which is pretty simple, because Shingo and Kyo share so much in common.

I've also been experimenting with some stuff; originally I wanted Shingo to flip forward after hitting the ground, so he'd go back to his normal faceup liedown, but I haven't been able to get that to look good at all. So I'm just going to add facedown liedown. And so Shingo will uniquely be the only character of mine to have both a face up and face down liedown.

I just have to edit a few Kyo frames to get this all to work, but it is quite difficult for me, so if anyone could lend a hand, I'd really appreciate it.

Question.  Is it possible to seperate the leg color from the skin so we can give him visible socks?

It's possible, but there's like less than five sprites that show his ankles/upper feet, so I'm not sure it'd be worth it. Plus, my goal with Shingo's separation was to do something that was relatively toned down and simple... you know, relatively.

... compared to B.B. Hood, this is toned down! Also, I want him to mostly match up with Kyo's CS.

I found some stuff buried several folders deep in my Chun-Li project folder.

There's two folders in here, one labeled "felo sprites" and the other labeled "Old felo sprites". The former has stuff from Felo's second and more expansive set of animations, while the latter are the original versions of these sprites, at least as far as I can tell. A good example of this are the sprites for Tenshokyaku: the old version is based on SvC, whereas the new one was based on SFA sprites.

(as a sidenote, the versions of these anims that are used in my Chun-Li use a mixture of sprites from the old and new folders)

Most of these aren't the original, Felo-CS'd sprite sheets (there are one or two of those however), instead I could only find separate, aligned and re-CS'd sprites. But I do believe these are the original versions; the only difference between them and the actual original sheet Felo made is the color separation.

Can't reproduce it with any other character, I assume whatever block overrides Rajaa put in place to add red parry are causing this.

Ironically, that was true for both of the directors of the first two games (Mikami for 1 and Kamiya for 2). Mikami was even specifically chosen because he was a scaredy cat!

Posted by Jmorphman  in Death Battle (And sprite fight animations) (Started by Long John Killer April 09, 2015, 03:59:16 AM
Board: Entertainment

well akira can manipulate everything so magneto on a power scale would lose. problem is that akira can't control his powers.

magneto has what? pulled a bunch of meteors? while akira can recreate the universe. it's other one sided match. if it was magneto vs. misaka then that would be a better match imo.

Tetsuo is not limited to only metal, sure. But aside from that, he's outclassed by Magneto in almost every conceivable way. Magneto's not only got actual control over his powers and decades of training with them (where Tetsuo struggled to control his powers and even the manga version had only a few months of practice with them; while the movie version had them for like a day before dying). Tetsuo also starts devolving into a giant flesh monster when his powers get too out of control, which kinda feels like a big knock against him.

Moreover, Magneto has repeatedly demonstrated that the range and upper limits of his control over magnetism is far, far superior to Tetsuo's telekinesis. This is just not a fair fight, Magneto's just too crazy powerful.

Also that thing where Tetsuo creates a new universe is like, he's working with all the other psychic kids to pull it off, and also they have to leave their own universe to do it. It seems like Tetsuo (and presumably the rest) die when they do that, though they also sorta become one with the new universe or whatever. In either event, if it were treated it as a combat ability, it'd be a suicidal move, so I'm not sure that really counts as winning in one of these contests.

Thanks for the pals!

Thanks! Got any sources on those names? The name of the throws and command normals is usually hard to find. I referenced this GameFaqs entry for those:
https://gamefaqs.gamespot.com/arcade/562704-capcom-vs-snk-2/faqs/15873

These are the official names
Quote

For games released around the time of SFIV/XIII and after the in-game movesets are pretty reliable and accurate. Anything from before then, however, is a little dicier when it comes to English language sources. I honestly wouldn't trust most places.

This Japanese language wiki has pretty much every fighting game character, along with every move they've ever had, all using the official names and shit. It even will point out situations where a move might have multiple names but is meant to be the same, or if a move acts radically different but always has the same move; it really covers all bases. The only thing they don't cover are normal throws, unfortunately.

And then there's the Japanese CvS2 guidebook, that's like the ultimate sanity check for "what is the official name for this".

also this is pretty obviously Illuminati stuff. I'm not sure there's anything that conclusively proves that this is set after SFIII but I kinda feel like this is pointing towards a setup where Alex has joined the Illuminati and become all Gill-y and they're rapidly gaining influence, IDK.

Re: Fix all your command issues with the EXPLODsive Buffering system!

I have two questions, The first is if you recommend to use your system this days or is not necessary anymore in IKEMEN? I'm moving to Ikemen go and I don't know what to do about the EXPLODsive buffering system.

I am not even close to being an expert in matters relating to IKEMEN, but AFAIK, there are major input parser changes planned that will obviate the need for any buffering system. There is also newer buffering system that was created for IKEMEN called Turtlewax, developed by Kamekaze and JNP. I don't really know any details about that, though.

The second is how you do to change everyday your portrait for a different member of the Justice League International?

Well, thanks for your time.

that reminds me, it's probably time to change things up. maybe go back to Jerri Blank or something

Thanks for the pals!

Posted by Jmorphman  in "Multiversus" (Fighting game with Warner Bros. properties) (Started by no1wammy October 28, 2021, 02:12:11 AM
Board: Fighting Games

Spoiler, click to toggle visibilty
Teen Titans Go is massively popular, so it's not that surprising. Of course they would put it in this.

it's also far superior to the 2003 cartoon

Thank you so much!

As with my previous characters, there is a CvS2 palette that directly captures the original in-game palette, as well as a "Default" palette that is a minor modification of the CvS2 palette. This default palette tries to stick as closely to the original as possible, only adding details that the 15 color limit would've made it impossible to add (for example, the glove trim in CvS2 is created using a unique yellow shade and the rest is drawn using skin shades; the Default palette adds more yellow/gold shades to better differentiate the trim from the skin).

... actually wait, shit, there are more differences in the default palette that I forgot to add (changing Shingo's glove colors to exactly match Kyo's, and a few other minor things). I've re-uploaded the default template with these changes.

Can we expect an update for Chun Li to include the new sprites recently made?

I did that back in November. 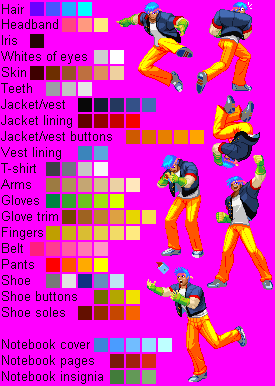 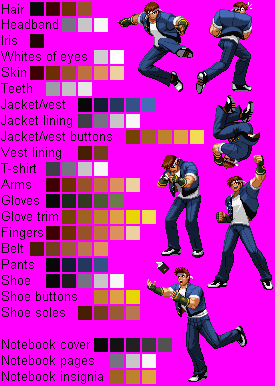 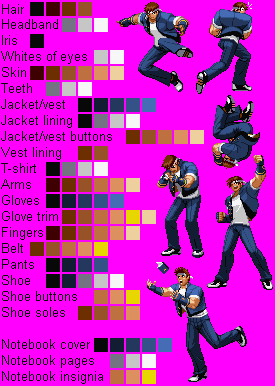 Now I have to go back and update Kyo to fix a few outstanding hitbox and vel issues (because I will be using him as the base for Shingo).

All non-get hit sprites are complete. Only 60 sprites remain, all of which are get hits.

Re: Marvel Cinematic Universe: THE END (until the next movie comes out)

Posted by Jmorphman  in Marvel Cinematic Universe: THE END (until the next movie comes out) (Started by Iced July 15, 2012, 03:54:44 AM
Board: Entertainment

Next week still needs to resolve a bunch of stuff even if it just opens up into new stories. Loki still answered all its questions on the heart of the TVA, MK still needs to end this current arc.

I suspect we'll get something like this:
Spoiler, click to toggle visibilty
Khonshu's imprisonment gets resolved, which leads to Marc being brought back to life, which then leads directly into a big final battle with Harrow. But that's all I would expect the episode could cover in terms of main plot beats. I would also expect a scene or two at the end dealing with Layla (but not fully closing off all tension between the two), and then maybe give Steven a send off (cuz seems hard to extricate him from that death scene), with the idea that Marc is finally alone in his head or something...

... which would then send up a season finale cliffhanger introducing Jake Lockley, the secret third personality.

Still leaves plenty of stuff for season 2 to do (conflict with other gods, conflict with Layla, conflict with this other personality), while also wrapping up all the major plot threads.
Macaulyn97 said, April 30, 2022, 11:23:15 PM

Should we start calling him by the new name in MUGEN too?

Literally everything in that link is speculation. Marvel has put out Shuma Gorath merch under that very name, with no issue before.

So yeah, the stand-in theory is best. It sure does seem like it's just gonna be a generic monster (indeed, Strange is handling it pretty easily in the footage that's been released).

Re: Marvel Cinematic Universe: THE END (until the next movie comes out)

Posted by Jmorphman  in Marvel Cinematic Universe: THE END (until the next movie comes out) (Started by Iced July 15, 2012, 03:54:44 AM
Board: Entertainment

How are they wrapping it up in one episode from there ??

Did they wait until the very end of Loki to reveal that it would be getting a second season? I can't quite remember, but I am pretty sure it was presented as being like the other Marvel shows (i.e., a one and done miniseries, not an ongoing series) until the final moments of the show where there was some kind of message saying "to be continued in season 2" or something.

I could see the same happening here; I really can't imagine the final episode managing to resolve every little thread and have Moon Knight fully ready to debut in a movie. There's just too much to cover. And the third personality specifically feels like it's something that's being set up in the background but never given major focus, specifically so that they can deploy that reveal in the next season.

apparently episode 5 did show us the third personality... ? It'd be a cool move if that's true.