Is it alright if I rehost your work on an abandoned Mediafire account I have?

Sure thing. I didn't expect there would be someone interested in archiving all of my stuff on their own. My works are free to be archived as well as contributed to whoever needs them.

Is it required that your new hobby's stuff needs to be backed up to that specific Drive account? Could you not upload them to MEGA or make a new Google account to upload stuff there? Seems silly to erase your work like that, but I suppose it's your decision at the end of the day.

Creating a new Google account isn't my option for now (as well as Mediafire). The only alternative I can easily access to upload my stuff at this moment is Baidu but we all know that 90% of the communities will probably be unable to use that.

Thank you for revealing the details that I have been trying to avoid mentioning. Also, I consider it a dating simulator with extra fun than a H-game, thank you very much.

To everyone else: Thank you for enjoying my last works. While they are probably not as solid as usual works due to the lack of testing, I hope that they should be good enough for the taste of everyone. I do hope that I would go back to scene one day in the future, once I get back to my country, with my pals are still up for another games.


No Kage trailer though because things happened

Hello MFG,
It has been a year since I released my first character and I have been enjoying my time in MUGEN communities ever since. Sadly, all the fun will have its end. As you may notice, it has been around 3 months since my last release, which is unusually long, given how I frequently released 2 characters a month. I will be honest here: before my last release (Weiss) on December last year a month, my work required me to move to a different country. Ever since, I was unable to held local MUGEN matches with my friends, who were my biggest motivations to work on my MUGEN stuff. My goal to make MUGEN characters has always been to share our joys and fun times to everyone as a way to thank the whole community for setting precedents so we could have some fun on every Sunday night. We tried IKEMEN but in the end of the day, it just doesn't feel the same as playing some dumb fighting games with each other directly while sharing snacks. Ever since, update/fix patches for my characters became way less frequently, even releasing doesn't feel as fun as it was as I don't even have any real chances to test them versus a real human player. And then I decided to take an unannounced break from MUGEN, briefly after my last release to look for a new hobby, even though I have already finished 3 other characters (even their trailers for my Youtube channel) and Kage being nearly finished. No new release, no more update, not even a reply on my Youtube channel. Now I have found a new hobby and I will plan to stick with it and its community for a long time. But this new hobby will require me to save a lot of back-up files on my Google Drive, which is only limited to 15 GB, with at least 5GB is my MUGEN stuff. I really don't feel like I could archive them in a new Drive as it is unlikely that I go back to the scene anytime soon so there is only 1 option left: they will be deleted after the end of next week. If you happen to have interests in my MUGEN works, this is probably your last chance to get all of them here (all updated, including Kage, Omega, Mikoto Misaka and Kuroko Shirai).
After all, it has been a pretty long run. Thank all of you for the support during my time as a MUGEN author. I hope the MUGEN community will always strive to be a better place for everyone to come and enjoy their own fantasies.
I wish you guys the best.

Fixed.  Unfortunately, Weiss will not have 1.0 version as I would feel guilty as hell if I had to downgrade those Glyph's sprites.


But I thought you quit on Mugen.

As inevitable as it is, I still have some deeds that need to be done first.

^This
^Happens when she gets hit out of an attack. It will start playing sounds as if I'm controlling an invisible Weiss.

Gotem. They have been fixed as we speak. Enjoy!

Using Twisting Air Step, Piercing Air Step and Pirouette near 2 Glyphes will make both Glyphes disappeared instead of one. You might want to look into that.

Ask and you shall receive.

Found a bug.
- Her semblance aura fragments are still there after 2nd round.

But for the rest this is an amazing edit Giang good work. <3

Got it fixed. Enjoy!

Correct me if I'm wrong, but if this is an edit of OHMSBY, shouldn't it be moved to the Edits and Addon section?

Not quite. You should probably download and try both versions. The differences are clear as day and night when it comes to coding and gameplay.

- I made an update to the small portrait that I made for you. Mostly with the eyes. But, I'll let you decide on which one you want to use.

I will take the new one, thanks a lot!

I'm looking for the animated BG this time, which Cham is working on currently. Thanks though!

Dude, these are not good. JtheSalty's characters barely play like CVS2. Plus the coding is sloppy.

I fought his Jotaro a few videos back and it was a struggle because of the wonky CLSNs, absurd priority, and overpowered normals.

Extremely bad even. Misaligned sparks, no hurtbox during evading, zero damage scaling, messed up corner push system as well as messy control. A solid no from me.

Seems to be custom style with Pots spark and CvS element? Maybe? Idk! The canceling is all over the place!

What would I do if I were a manga hero?

Stop being lazy and finish her already!

Also, Astral BG is a must for this one, kukuku.

Kek
Stop being lazy and rip her Astral BG already!

This is pretty cool! Thanks Ink

Re: Character of the Month: October 2019 Voting

I'm glad that nake man won! No homo though.
Congrat FClass, you deserve it man!

I wouldn't exactly call Falcon's version the best one and I'm sure many of us here agree with me.

Much appreciate both of you for the small port and big port!
Sadly, I can't seem to find the sprites that match your request, CozySquirtle. I hope that should be fine for you?

You would think people would use Van's Rugal as base to make any version of him.
Its the best Rugal for the engine from what ive used.

'Cause the best version tends to have complicated coding that even makes adding Pots FXs hard tasks. Knowing Van, he has probably used all the vars and fvars available, leaving no space for a normal Pots editor to add sparks.

Nuh uh, you can't :p
I will release the full sheet on Spriters Resource once Neo is finished. For now, I would rather keep everything a secret :x

If you provide me a standing sprite and her big port, I can make a small port for you, if you'd like.

Much appreciate! I haven't worked on her big port yet (and I actually would love someone who is more experience in that kind of things than me to do this). Also, here is her standing sprite: 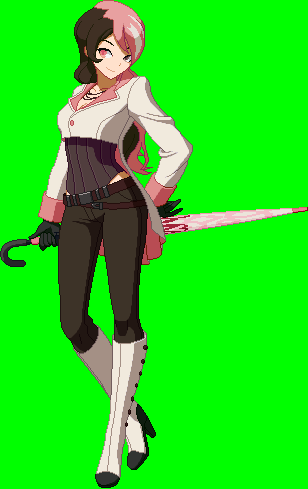