Messages by The Sudden Rarity

That's a brilliant collection right there ^..^ you still growing it? And speaking of the TMNT/Batman book you got there . . . I have the other crossover one with Batman: TAS and NICK/2012 TMNT. Haven't read it yet, but it looks pretty damn cool.

And yeah, my Power Rangers collection has taken about two years as well, starting with the Year One hardcover. Gonna have to scour eBay for Year Two, and preorder the Shattered Grid hardcover. It looks fantastic!

Although this RE2 tangent is fun, I gotta c-c-c-combo break it!

Ever since it was announced to be in development back in 2015, I had been anxiously awaiting the arrival of Kingdom Hearts III. A date was finally announced early last year for winter 2018, but as the date free near, they delayed the game for January 29th, 2019 (the first ever delay).

In preparation for the looming date, I pre-ordered the deluxe edition on November 1st and dug into my 1.5+2.5 and 2.8 to get myself ready for it.

Low and behold, rather than shipping it a few days after release . . . it shipped immediately on the 29th. I've been enjoying the game ever since. 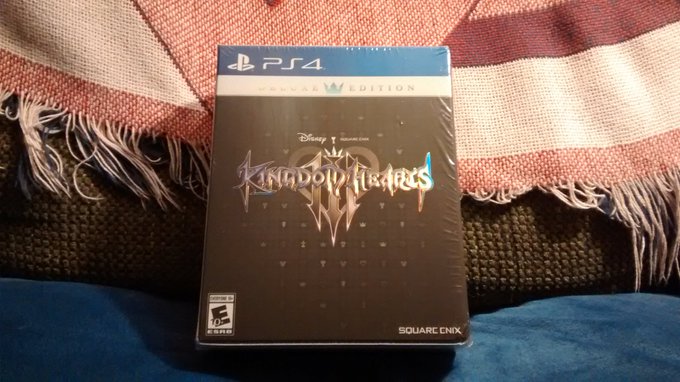 Feb. 1st
(Purchased on this date. Received on Feb. 5th)

After enjoying the MMPR comic series by BOOM! Studios, I had to start collecting their sister series: Go Go Power Rangers. I have yet to read them, but I get the feeling this series takes place before their MMPR series. Either that, or it's the universe Lord Drakkon is from. No idea yet, but it looks to have good art and if the story is anything like their MMPR story, then I'm sure I'm gonna enjoy it. 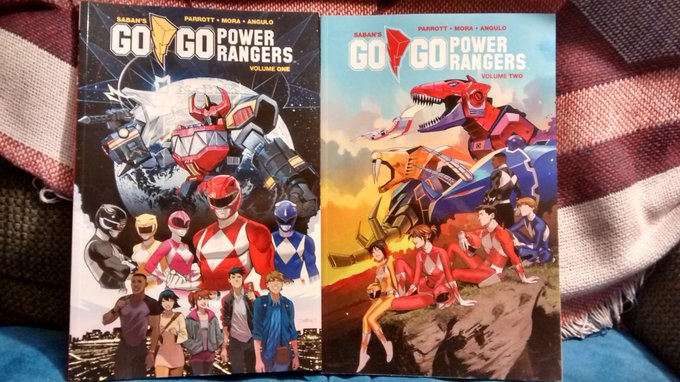 Originally I had purchased MMPR Year Two deluxe hardcover, but I must have bought it right as it became sold out, because it was gonna take about 2-3 months to get to me. I emailed BOOM!'s customer service about it's availability and about 3 days later I get their response: there were no current plans of reprinting Year Two. That means my money was in limbo indefinitely.

I refunded my purchase and just bought the standard volumes I didn't have, which were 1-3 and 6. With some money left over I bought two Power Ranger spin-offs. Here they are: 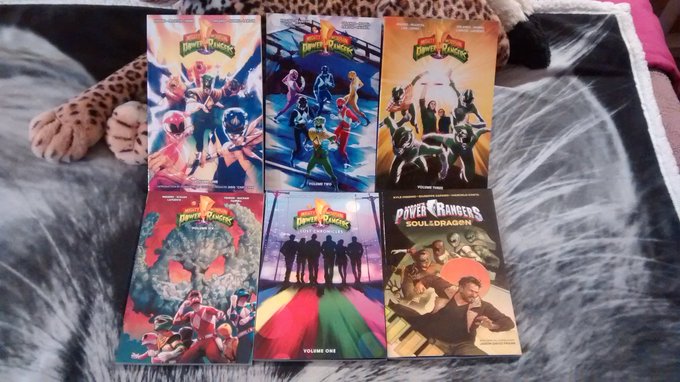 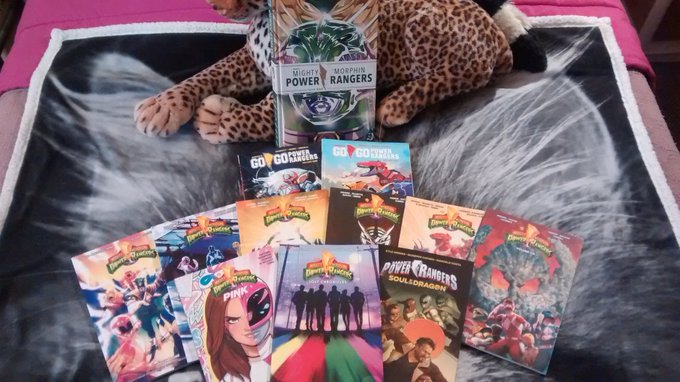 So disappointed that Year Two is currently out of stock, but hopefully there will be a reprinting in the future.

It's like he honestly doesn't understand how much it takes to work on something. I bet the idea that people pay hundreds for a spritesheet blows his mind XP

Anyway, it's pretty cool to see stuff like this crop up from time to time, so keep this kind of stuff up ^..^

Had to look up Kage (I like saying "Cage" though I know that's not how it's pronounced) and noticed a lot of people are upset with him. I think he's pretty cool, regardless if he's another shoto character.

Loving this new character from you. Can't wait to see how neat he's gonna be when he's done ^..^

Huh, Billy Crystal's in this?

Yep ^..^ since it was made for TV the animation can be spotty here and thers, but the audio is pretty good for something so small. It's a nice, albeit obscure, piece of history that I thought would never see the light of day again. It also seems that only four voice actors were in this, though I could be wrong.

As a child I had watched Animalympics on occasion and really enjoyed it. I never had it on VHS, but rather a tape it had been recorded onto, as parents and grandparents did just that sometime ago (yes, I'm an old timer XP).

I never thought I'd see the day this being on region 1 DVD, but here it is. I'm glad it has been restored, including the infamous "suicide attempt" scene, which I'd never seen before. I read about the scene and the article made it look like it was pretty terrible as it was removed from TV publication and reruns. The Tom and Jerry suicide scene was much darker than the one in this film, though.

The music is a bit silly and cringy, but not as bad as I thought it was gonna be after not seeing it for almost 2 decades. A lot of the jokes and caricatures based off then-popular celebrities and athletes are indeed dated, but I do get a decent portion of them. Adult jokes smattering here and there. The screentime is easy to sit through being around 76 minutes. An all-around joy.

Was certainly nice going down memory lane once more. 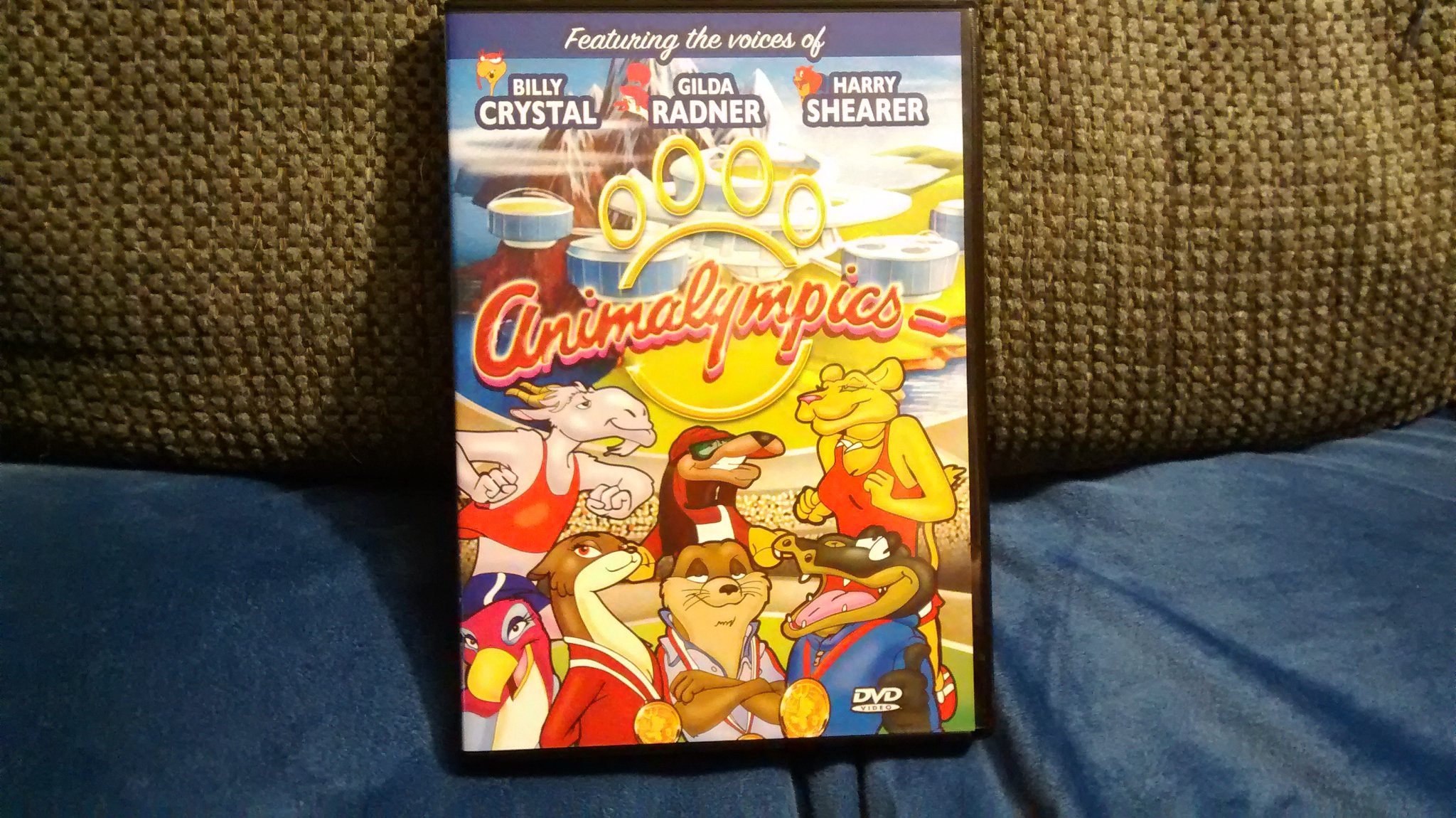 Also, I know I'm super late on this but i finally got a PS4 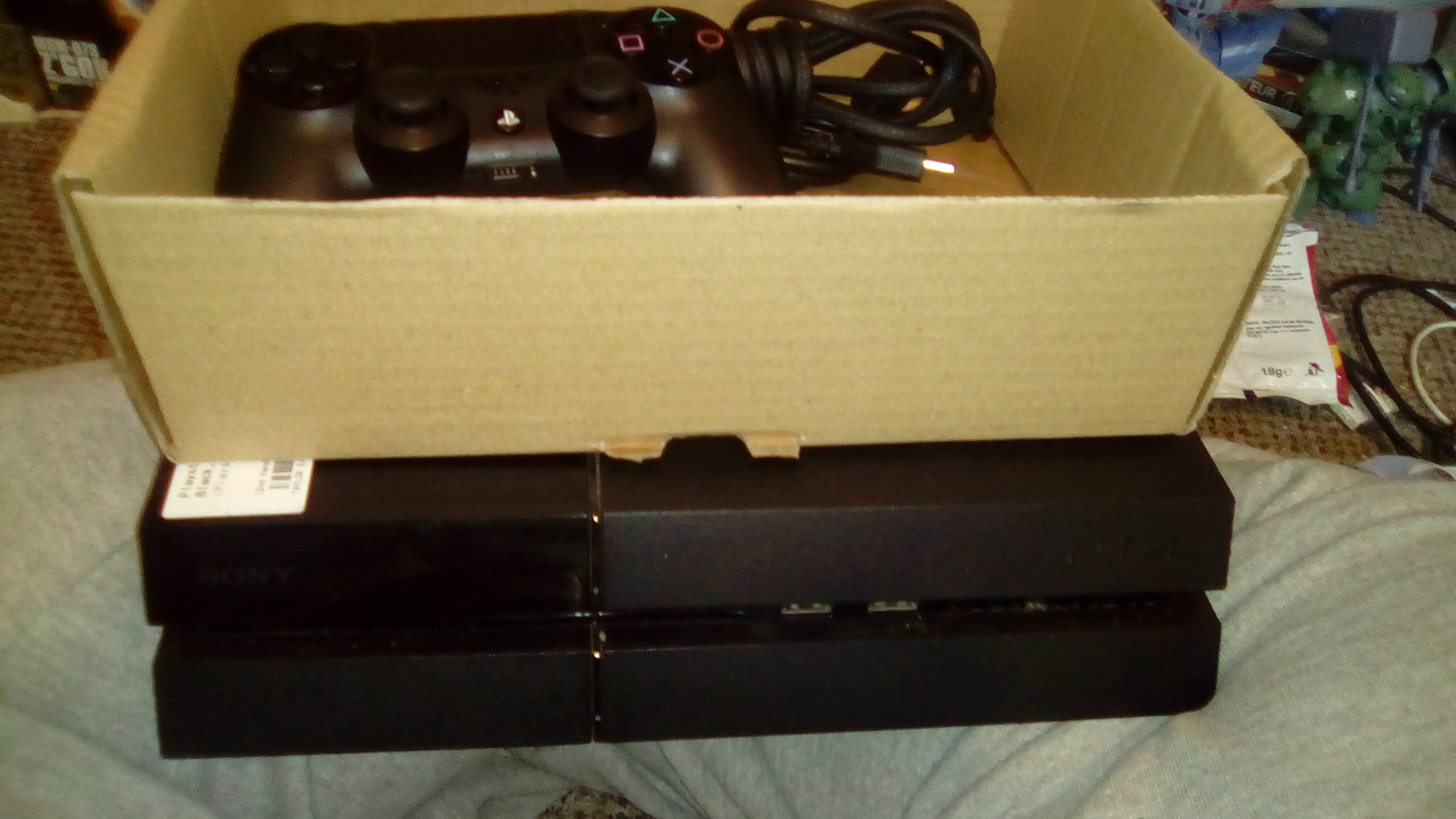 A fair warning: the first model PS4s tend to overheat faster and sound like a jet engine after a while. Mine died within about six months, even with regular cleaning. Just giving you a heads up.

Dec. 31st
(Was when I bought it, just didn't get around to posting)

I've never had a proper chance to play the original Spyro trilogy, since when I was younger I never had a stable PS1. I either had a rental system, or the PS1 I had never stayed with me long enough. However, I distinctly remember playing Ripto's Rage and a demo disc of one of the other two.

It sucks I missed out on the original run of these pretty slick games, but with this HD remake trilogy I finally get to play them through. I have beaten 1 and 2, I just got Year of the Dragon, then to %100+ each one, if I can. 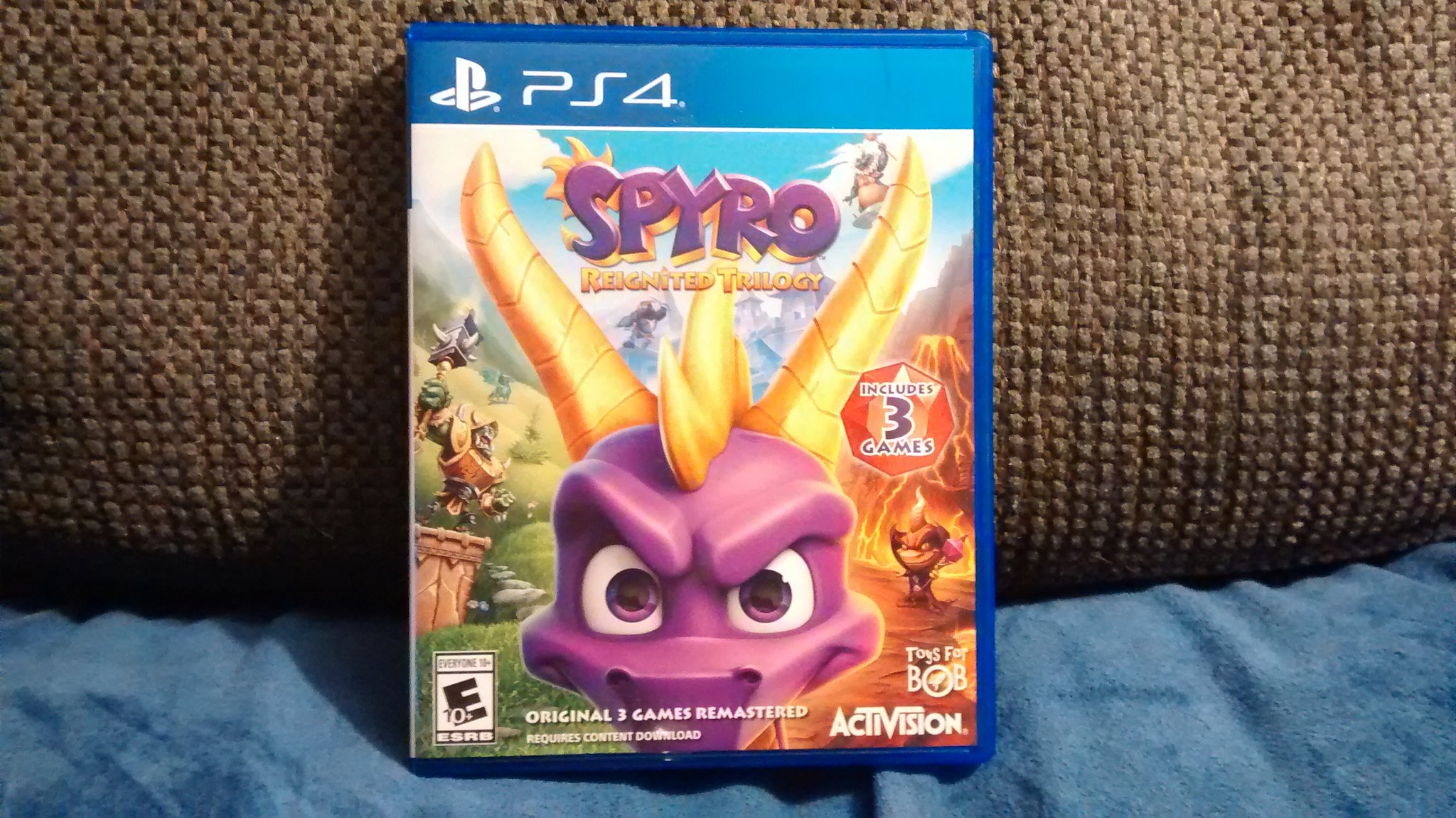 Look what I got for Christmas. 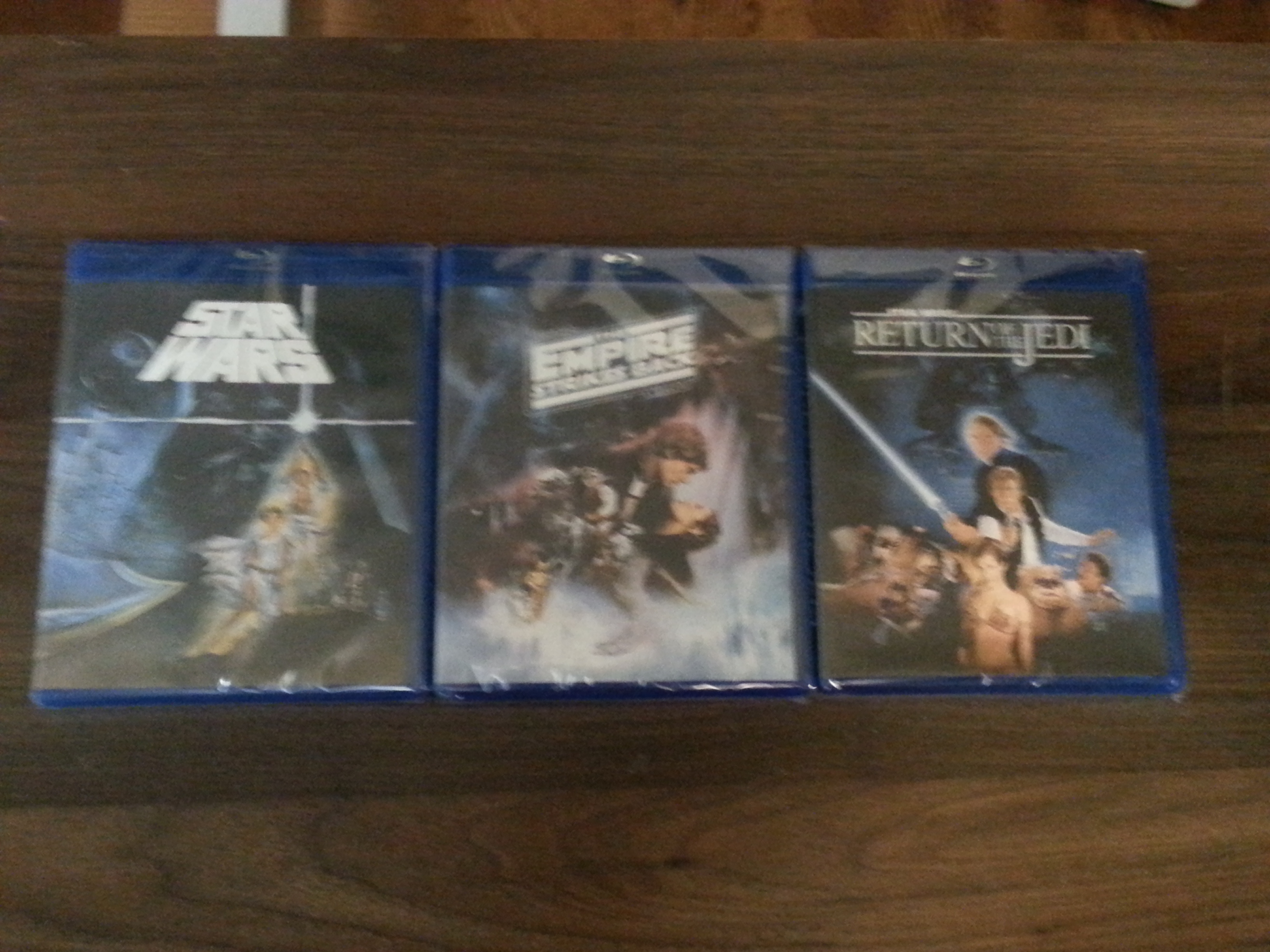 Are these the bootleg Despecialized editions?

Dammit, my PC crapped out a week ago and now I can't play with this guy yet DX hopefully I'll have a newer PC soon so I can try him out >..<;;;

Re: Poll Thread - Current Poll: Should Layla (Dark Nation) be a playable character?

I think it would be cool to separate them.  And even more badass if you could cycle
tru them when playing as the dark nation character.


That would be cool, but wouldn't the problem with that be custom states?

I'm sorry but does military camo count as cool stuff?

If you, more or less, bought it and you think it's cool, then yes.

Okay, was just about to say "all's good now" XP glad things were fixed up ^..^

Your page is either down, MFG hosting is down, or my net connection is incredibly slow.

Here's something I think is cool, though not intentional: if you time it right you can use Steel Smash as a counter move, because parrying is bound to pressing forward, so if the opponent attacks and you use Steel Smash at the right time, Steel Smash becomes a counter move ^..^ I'm sure the command can be done with other characters that have a parrying system in place, just thought it was cool.

EDIT: oh, and you forgot to add the clothesline attack in the Readme: while running press HP/z.  I didn't know the move existed, since I discovered it by accident while playing with the Steel Smash "counter" move I mentioned.

Odds are you've already seen it, it was called The Spongebob Squarepants Movie.  All of the characters and plot points exclusive to that movie have not appeared or been referenced in the series proper, so it leads me to believe that it all ends there.

Posted by The Sudden Rarity  in Sprites/Animations/Stage WIPs (Started by Margatroid January 04, 2016, 10:00:41 PM
Board: Graphics

Either way, I'm still gonna use the stage and I have some good Megalovania tracks to use with it ^..^

Good luck on this stage and the other projects you got going ^..^ I'm definitely keeping my eye on this.

Best of all, it has a proper ending and no amount of new episodes all taking place before it will change it.

I didn't know this series, that isn't plot driven, had a proper ending. I'll have to check out the ending sometime ^..^

RIP, good sir.  You made a damn good cartoon with staying power.  That's a real achievement in entertainment for any animated/kids TV show.  Hope his family and friends will be okay.