Well, I don't think anyone was expecting Pyra and Mythra without Rex.   Interesting.  Sorta bringing back the old Zelda/Sheik dynamic.

When is the last time we gotten a proper Nintendo Direct?

As long as we're all speculating, I may as well throw the latest semi-plausible speculation out there.  A little while ago a post was unearthed from May 2019 that claimed to be the list of characters that Nintendo had approved as potential DLC.  It was understandably dismissed as total horseshit at the time, but it's come back into light recently because it's seemingly gotten everything right so far.


It's worth pointing out that the original post was made on 5/31/19, when Joker was the only DLC fighter revealed, and it correctly predicted Hero (with both Erdrick and Luminary, no less), Banjo, Terry, Byleth, Steve, and Sephiroth.  The only omission is Min-Min, who we already know was a last minute addition after the pandemic forced them to change their development plans.

As always, take everything with a huge grain of salt, but I will say that being able to correctly guess so many unlikely longshot characters to lend it some credence.  I'm hoping against hope that we'll actually see Porky in Smash, but Professor Layton wouldn't be too bad either.

Shitty EA losing the exclusive rights to Star Wars games only to be immediately followed with an announcement Shitty Ubisoft got the license and are making yet another generic open-world Ubisoft checklist game is the epitome of the "Upgrade/Fuck, Go Back" meme.

^ 3D Land and 3D World play closer to 2D Mario games, being linear platformers with a series of standalone levels.  This Bowser's Fury expansion appears at first shake to be closer to 3D Mario, with a single open hub level with multiple challenges to find.

IMO, it's just generally symptomatic of Toriyama's extremely short sighted, week-by-week writing style that he never left himself enough time or space to build up or properly explain anything, which is why so much of the alleged massive increases in strength wound up being verbally stated rather than visibly shown.  The stuff that characters were doing to show off their power level in endgame DBZ were more or less visually identical to stuff Goku and Roshi were throwing around in original Dragon Ball.  For as much as DB excels in many aspects that make a great manga, its actual storytelling is pretty slapdash when you get right down to it.

I think that contributes to a lot of the fervor around Dragon Ball content in Death Battle; so much of that series is predicated on characters insisting that they are very very strong and relying on the readers to just roll with it, that when some actually puts in the work to find out whether or not they are, in fact, very very strong fans get miffed because the disbelief can no longer be suspended.

This episode reminded me of one of my biggest gripes with Dragon Ball; that being it's overuse of random multiplication tables to indicate a character's power.  Every new villain or transformation or whatever is always hyped up as being eleventy billion times stronger than something or other, which sounds impressive at first shake but doesn't actually mean anything substantive.  It's such an annoying "tell, don't show" method of storytelling.

Not that I have any issue with the outcome of the episode, mind.  As strong as Hulk is, they make a good point in that he is always on a relatively short timer.  Unless he's able to very quickly overwhelm the opponent completely he's likely to run out of steam first; IIRC, the exact same thing was the deciding factor when Hulk lost to Doomsday in the last DB he was in.

Re: How important is "meta" to you?

I don't play anything at a competitive level, so meta rarely matters to me.  More often than not, I wind up gravitating towards a playstyle that I'm most comfortable with rather than high-level optimization.

The only time I really pay attention to meta is for games where a significant time/resource investment is needed for things, and that's to make sure I'm not wasting them.  For instance, I play Dragalia Lost quite a bit and I try to keep an eye on the meta discussions and tier lists when I'm upgrading things so I don't end up spending a ton of precious resources building up a unit that ends up being functionally useless.

Quite possibly the most important buff that got rolled out with this update: 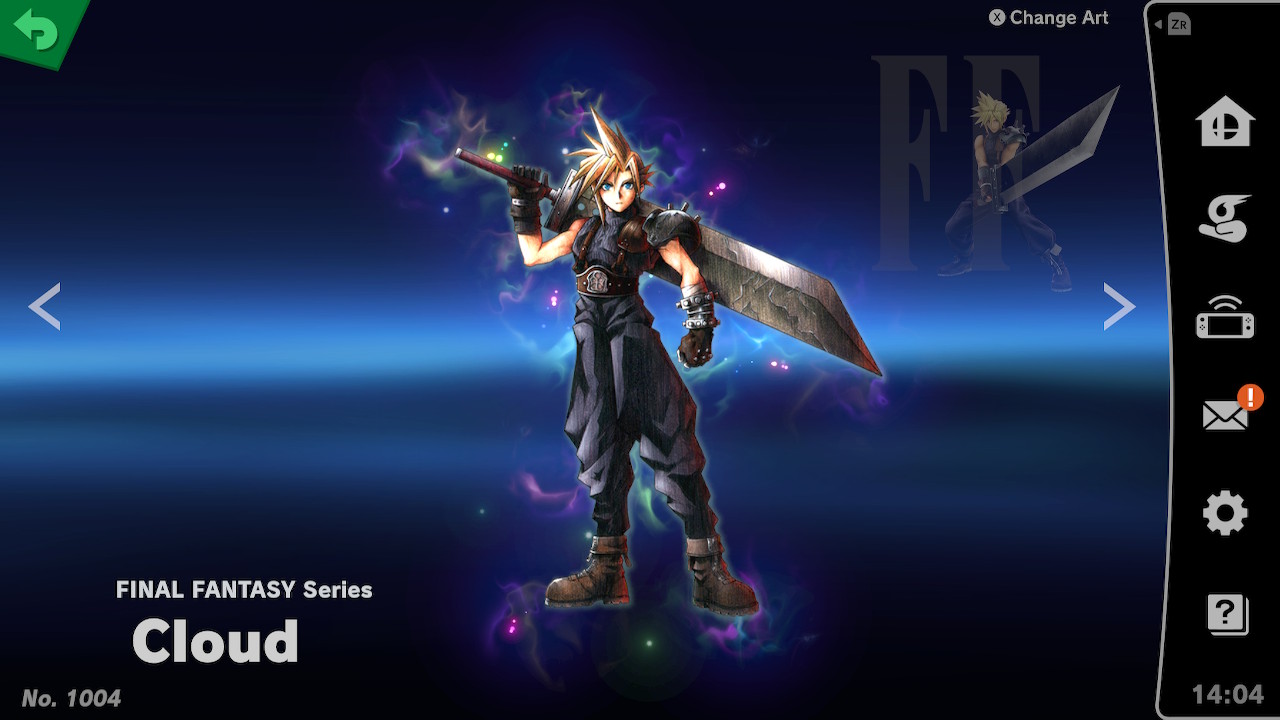 They finally let them add Cloud's original artwork to his spirit.  Between this, the new stage and music tracks, and the slew of new spirits on Sephiroth's spirit board, I feel like they've actually made up for how miserly they were with Final Fantasy content until now.  Now FFVII actually has the kind of representation it deserved to have from the start.

Looks like they're using DBS Broly as the baseline here.  I haven't been following Super at all so IDK how much that one differs from the original recipe.

They let Yoko Shimamura do the remix for Cosmo Canyon and HOOOOOOOOLY shit is it incredible.

Ripperoni to Geno, once and for all.  They didn't even upgrade him to a deluxe costume like Sans.  The Barret, Tifa, and Aerith Miis are a nice addition, though.

The FFVII music selection is looking very nice, in that FFVII actually has a music selection now.  Wasn't expecting Cosmo Canyon at all, much less a new arrangement, but I'll happily take it.

Shit yeah, DKC3!  Everyone always goes off about the first two, but 3 was always my jam.  So glad that's finally up on the service.

If we actually get more than the Advent Children arrangement of One-Winged Angel that the trailer used and Squenix actually lets him have his pick of music, then J-E-N-O-V-A or Birth of a God would be appropriate picks.  Maybe even Those Chosen by the Planet, considering that's his actual theme.

Personally, I'm hoping he somehow managed to get the Lil' Stamp theme song from FFVIIR.

Wasn't expecting a new Ghosts 'n Goblins title anytime soon.  Or rather, ever.

And it looks like an indie game.  But I mean that in a good way; The 2D graphics with the hand-painted storybook aesthetic is a very interesting stylistic choice.

His fighter page is up on the official site now, along with his full render.  He has a shirtless alt to match his final appearance in FFVII, for all the thirsty fangirls and boys.

RIP to Geno and Sora for sure now.  No way that Squenix is getting 3 DLC slots to themselves.

How the ACTUAL fuck is it Sephiroth?  Square was so fucking stingy with barely allowing Cloud in the game.  What changed?

Geno isn't a likely announcement - tonight at the very least - because his popularity at this stage is limited exclusively to the niche faction of Smash Bros fans who haven't stopped begging for him in Smash since the days of Melee.  It's not something to announce at an industry-wide event of this scale if you want to generate any hype.  I'm guessing Crash Bandicoot or Doom Slayer but it really could be anything at this point.

It's not about whether or not Nintendo makes any money off of it.  If someone is using illegal copies of a copyrighted product to make money for themselves, and the copyright holder doesn't take action to prevent it, then it sets a precedent that others can do the same.  Besides, by Nintendo's own admission they reached out to the TOs and asked them to stop so that it wouldn't have to come to legal action, and they straight-up refused to do it.

This is not a case of some unfeeling corporation bullying a harmless little fan event because they're greedy and mean.  This is a case of people doing something they for a fact knew was illegal and that they knew for a fact would get them in trouble if they continued doing it, continuing to do it anyway because they felt entitled to it, and then trying to play the victim when the natural consequences of their actions caught up with them.