As for his Violent Ken intro vs Froz's Vega, there's a bug where the round 1 animation plays twice. After that, Vega can move freely and hit Ken before the fight animation plays, able to deal some damage while he can't move. Just a suggestion, but it would be nice to add envshake during the pulsing sound effects to add a little more oomph to the intro.

I found a few bugs after testing a few minutes:
-The first attack message still appears after getting hit by Psycho Stream or blocking it and hitting the opponent with any attack right after.
-The back dash animation stops before she touches the ground when walking backwards.
-Strafe Dagger command is too restrictive and doesn't work.
-Cannon Strike command doesn't work with with A.

Great work as always! Look forward to the next character.

And don't forget about Hibachi and Taiga

Didn't OHMSBY removed them since there's already a good Taiga by Kohaku and nobody knows who Hibachi is?

Feedback:
-Time to get serious intro is still bugged as she falls on the floor when she jumps and lands on the ground normally.
-The afterimages when she dodges are gone during MAX mode.
-There is no sliding dust and sound effect at the end of Sliding Wave.
-There is no sliding dust at the cancel or miss of Blaze Strike.
-Vertical Slash uses a projectile hit sound instead of a heavy punch one.
-The sword swing sound is missing during EX Knife Uppercut.
-The 1st hit of Sliding Wave is not a heavy kick hit sound (But the Flip Kick does).
-EX Kikou Shou doesn't knock the opponent to the ground (But the HP version does).
-Street Combo is missing the jump sound on the beginning and the last jump, landing effect and sound when she touches the ground the first time and a lot of swing sounds per punch and kick.
-A suggestion, but Back Off is better off as a kick throw instead of a special move (That way, you're not limited to the opponent's side).

Along with the other feedback, please take a look at these as well.

I forgot to add that I only made this for 1.1 and I specifically use non indexed png for the ports

This is originally a 1.0 character, yet it can't be used on 1.0 because of that? That makes no sense at all since it doesn't have any sprite effects nor Camera-Zoom, which would require it.

Great work on Saya. Unfortunately, I found a few things on this release:
-This now happens for half a second on both Aberrant Arm and Aberrant Mighty Arm though a lying down state: 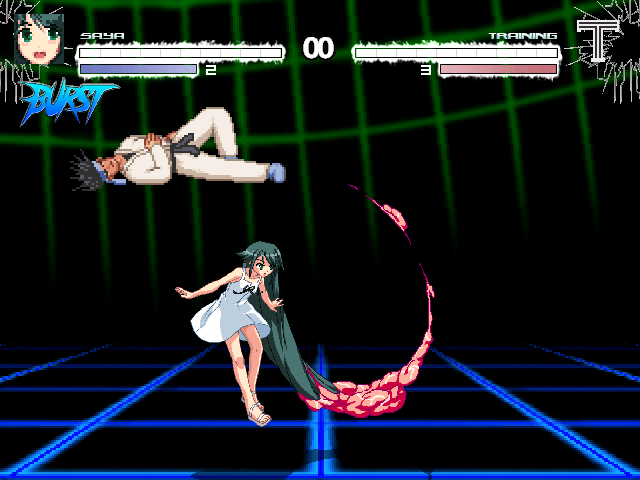 Maybe it would look better if the opponent was using the same state as before, but facing on the opposite direction instead. That way, I'll look like the opponent is being thrown to the floor.

-The normal shockwave is now misaligned after the opponent is hit while attacking by her standing HA: 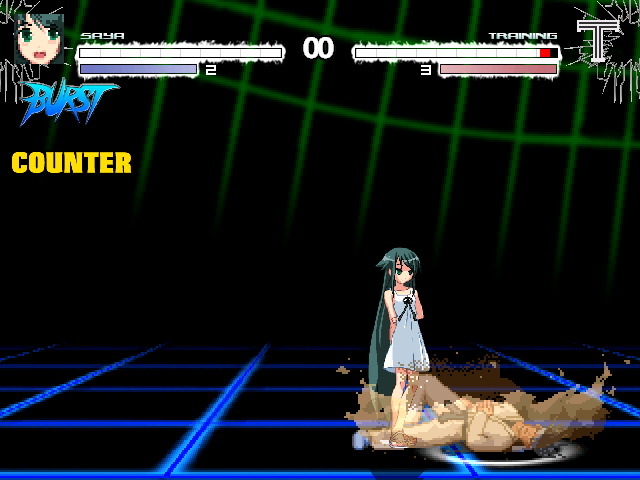 Also, I missed these things and might as well mention them:
-The hitspark and guard spark when the opponent is hit by A Aberrant Arm up close is slightly misaligned.
-Her forward throw is missing the sliding dust (Even though there's a small dust already, it's part of the forward dash).

That's all. Hyped for Heart next, I do hope she doesn't have the misaligned sprite issue on certain animations that BBTag has.

Got this error when attempting to use her on 1.0:

Another thing I should mention if using debug mode, resetting the round changes Vegeta's palette (if using an alt) back to the default one.

Also, there's another bug I forgot to mention. Not sure if this applies to 1.1, but I tested it on 1.0 (Which does and don't want to necrobump the other topic). But choose a different palette on the select screen while the palette selector is turned off will always be the default palette on base form until SSJ is activated. Reverting back to base will be the palette you picked on the select screen. You might want to take a look at that.

-Haven't updated the MAX version of that move yet, so I'll get around to that. Guess my question is will I still want to use my slightly original concept, or just go with the closest source material, to make it more like the Level 1 variation and add 8 more hits to it?
-Fixed, I think. Is it a MUGEN 1.0 problem?
-The fire for Oni Homura is debatable. In CvS2, which is where it originates from (it could be from CvS1 too, but I forget.), it's only used by Orochi Iori,and it's practically Ken's Shoryureppa. Later versions have normal Iori attack with fire from the 2-3 times he hits.

-Honestly, I think you should just stick with your slightly original concept. Karma's version is already close to source material, so it's nice to have a little bit more variation and creativity. My opinion of course.
-Yes, I was using 1.0.
-Yeah, I just realized that. I may have told Falcon Rapper to add it in his Iori and forgot that KarmaChameleon's didn't had them (Another reason why I didn't mention the flames were missing on the opponent during Shiki 108: Ya Sakazuki as Karma didn't have them either).

Finally got the chance to test the Iori beta. Here's what I got:

-He can't hit the opponent if they got hit by Ura 108 Shiki: Ya Sakazuki in the air.
-MAX Shiki 311: Saku Tsumagushi causes him to freeze once the move is activated.
-The last hit of EX 127 Shiki: Aoi Hana can miss and won't connect if done too quickly.
-The EX activation sound effect got cut off on EX 100 Shiki: Oniyaki.
-There is no rush sound effect on the startup of Shiki 1201: Ya Otome (Look at KarmaChameleon's version for the sound effect. There is a dash sound effect, but it doesn't work as there's no dust effect anywhere).

Unfortunately, he's got some problems that doesn't exist on the old version and broken a couple of things. But since this is a beta, hopefully they will be taken care of when the official update is out.

-Sakahagi takes a second to hit after being grabbed (This bugs me as it looks like the characters freeze for a second).
-The effects on 100 Shiki: Oniyaki, Tsumagushi and Shiki 311: Saku Tsumagushi has shadows.
-Shiki 100: Oni Homura has no effects except for the last hit.
-San Shingi no Ni has no envshake on the final explosion.
-Orochi Iori's level 1 Shiki 1201: Ya Otome has no strong shockwave sound effect on the strong ground shockwaves.

Great work as always, OHMSBY. No other problems to report on my end.

Downloaded the update yesterday and everything is good. But the only thing I noticed on the running animation after removing the running dust, only the second step sound can be heard after the startup.

Also even though this wasn't changed, I still think the slash swing sound is still unnecessary on the standing WP. The crouching and jumping WPs are fine as she swings the sword. Why not do it the same way with Sennou-Room's Eri when she used her tonfas? Just wondering. There's no sword swing effect on it, so it shouldn't be used.

Feedback:
-Standing WP doesn't need a slash swing sound as she's hitting the opponent with the handle and not swinging the blade.
-Standing HK has no landing effect when she touches the ground.
-The hitspark on jumping WP is misaligned.
-Crouching MK plays the light kick swing sound.
-Flying Mare throw can only be done on the forward direction.
-The running dust only needs to be played once on the startup of the running animation.
-Angel Arrow has shadows on the projectiles (The aren't physical arrows, so they don't need them).
-The bird projectiles in the Omega Fire Bird have shadows while they do not in Aura Bird.
-She stops glowing yellow in the middle of EX Slash Whip.
-Dark Manslayer should fail if the move doesn't connect as she can't be hit until lifebars return.

Glad to see you back, R@CE. It's kinda sad that you had to put M.U.G.E.N on hold without mentioning anything here back then especially with the stuff going on right now. I wouldn't have known if it wasn't for YouTube.

Character doesn't work on 1.0 even though the mugenversion says it is in the def file. Gives this error due to the SFF having 32 bit sprites:

Yes, after re reading, I see this and I'm surprised as well.

All the chars I shared are what I commission from him.

Hope that answers your question. 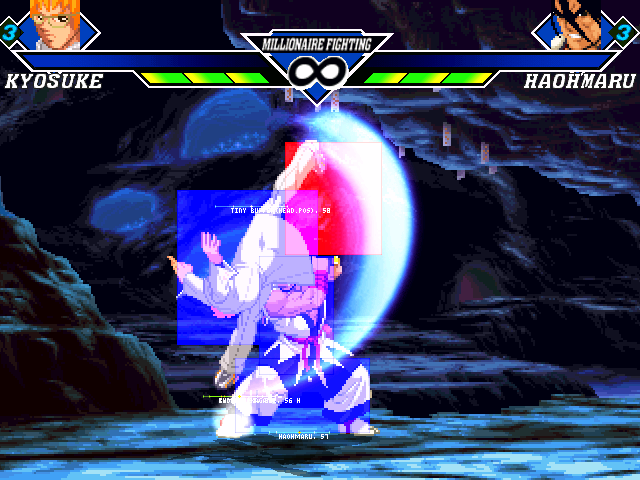 Thought it would better with debug mode on.

Re: Nep MUGEN Thread: Neptune released, all other characters updated

Nice Nep! My only gripe is that the voice clips feels too low and you could barely hear her voice during gameplay.

Its been a long awaited moment since I started spriting her, and me and Nep Heart put the love and effort into this character, as we both really hoped for a Nep character and now our dream became reality.

You and Nep Heart did an amazing job on the character. Great job on her you two.

Re: (K' by Chazzanova) Rowen's PotS/Infinite Edits of Varying Quality

It sounds like you're talking about QuickFist's version, as that was more custom in terms of "gameplay and aesthetics" and those 2 were notably different.

Nah, I'm still talking about Chazzanova's original as I remembered it still had the "Chain Combos/Air Combos" for some reason as that's the one I downloaded years ago prior to your edit (Unless there was another version out there that had them removed already). QuickFist's version is more custom and changed more aesthetics like hitsparks, effects and made him 4 buttons instead of 6, so there's no way I was talking about that one.

Re: (K' by Chazzanova) Rowen's PotS/Infinite Edits of Varying Quality

Nice work on K', he definitely needed one as he had chain and air combos with no config file to turn it off. Looks like everything else when it comes to gameplay and aesthetics is fixed.

My only gripes is that the small portrait isn't the default palette on the select screen and the (9000,2) regular portrait should have a y axis of 19 as it's sightly misaligned. Overall, that should be it.