You have to edit the sprites of your screenpack, or change things in the "system.def" file in this case.

Thank you, that worked!

To remove the random icon in your select.def file search for a character called 'random' and rename it any other way.
Meanwhile in your system.def file there's the option to make empty cells selectable. Disable this option.

to clarify, I'm trying to remove the question mark, not the randomizer itself.

also, second thing does not help, the icons are not because of empty cells, they are part of the menu art.

I'm trying to hide my secret characters, and to do this, i wanna hide the randomselect icon and empty icons that are shown on the menu art.

how do I get rid of the randomselect sprite, and how do i change the select menu art?

Time after time as you progress, do test runs on the fighters you're doing and check to see if they're going the way you intended them to go or not. It's important you want to make sure the fighters are fully prepared.

I've been doing exactly this during second year of working on this, which is what i meant in the post by "minor fixes". My current mission is to clean up these characters and make their names, win quotes, and  portraits better, more fitting to the character, and just generally look better.

Re: Attacks with no damage stat?

The attack is either using targetlifeadd. Or its putting p2 in a custom state. Look for p2stateno or targetstate in the attacks code follow to the state in question and there will be a lifeadd in that

Yep, it was exactly that, I did notice there was 2 values to the damage, one higher then the other, im guessing this means "damage between these two values"?

Attacks with no damage stat?

I'm new to Fighter Factory, and i noticed that some attacks don't seem to have a direct damage stat for some reason, and i want to figure out how it works, and how to edit it.

Just in case there are multiple instances of this that are different, i'll just use one example and ask for the explanation of that, and if you want to mention others, go ahead.

Explain this to me like I know nothing about fighter factory.

The name of the character is "Akuma KOFA"

Akuma KOFA is a favorite of mine, mainly because its a version of akuma that uses the raging demon as a level 1 super instead of as a level 3.
The problem is that this specific move does too much damage, even compared to other supers, and i need to change it individually
I spend time looking through the code, , and i THINK i found the move, but it the damage stat is missing for some reason, everything else is there, but the damage isn't there.

The move is the D, F, D, F, "X" or "Y" move, i'm guessing its because the move doesn't do damage instantly and triggers something ELSE that does damage and the damage multiplier is there, but i have no idea what it is/where it is, can someone help out?

LOL don't worry. People used to tell me the exact same thing years ago & I even responded the same. Don't take this the wrong way, but... Do it. Talk less. Show by action. People love to say what they want or will do, yet never get past the front door. You've already explained your intent, now all that's left is for you to put the work in.


as soon as im done with vacation, because my internet sucks here.

This isn't JUST a comp, all of these characters are going to be tweaked and given new intros, lines, story, and possibly even other tweaks/changes, all the menu screens are going to be edited, there's going to be a story-line to the arcade mode, ETC.

right now, the menu's and select screen are a placeholder, the characters have been tweaked in their hp, special meter, atk, def, and in other minor ways, the arcade mode, while not having a full story, is playable and complete in the gameplay aspect, and i need to order the characters better in the select screen.

Thanks for the heads up, but while this is going to be similar to a comp, its not going to be JUST a comp.

The best advice I can give you.. Decide what you want to do, then do it. Sounds simple enough right? You aren't going to learn going straight to the books. Try what it is you want to do, then you'll gradually discover what it is you lack/need to learn how to do. Taking it all on at once can be overwhelming. Set small goals, make those edits to learn what does what. As long as you have the imagination, you'll see procrastination is your only enemy. IMO, forget about anyone else helping you, you want something done, well I'm sure you know the saying.

I think my last post was misleading, i got most of the message, and I think i'll add a "goals list" to my post soon, and while i agree with doing things myself, there are some things that i can't do myself without LITERAL YEARS of experience on MULTIPLE fighting games.

I can do most of these things myself, but the one thing I can't do completely by myself, without the game development taking literally dozens of years, is balancing out this game, and to do that, i need a way to take EVERY SINGLE ONE of these characters, take them to highest level of gameplay, and see if there is characters that need tweaking.

of course, this one is one of the hardest to fill, because by myself, this requires that take time out to,

1: Master all 202 characters
2: Purposely find ways to be cheap/abusive with these characters
3: Document every single thing I do when playing as these characters
4: Make sure that with all the documented knowledge, I don't overnerf or overbuff a character
5: And finally, repeat this whole process with every single change, no matter how tiny, that is ever made to the game, EVER.

meanwhile, on the other end, if somebody else wanted to help, all i would need is,

1: Play the game
2: Comment if they think something is unbalanced

I don't expect to get anything immediately, and i'm going to be focusing on polishing the look and feel of the game, but to balance out a competitive game, as I think I remember the "Extra Credits" Youtube channel saying, you need people who play the game.

I don't feel that I'm entitled for people to play this game just because I made a comp of characters, but anybody who does, would be doing a great service to me and this game.

Nah, I can't. You need to know about MOST of the whole stuff that goes under the "SCTRL" and "TRIGGER" filters to do a thing and do it right. So you'll have to put your time in it. But, as a babysteps, take a look at a controller "HitDef" and a trigger "animelem".

Ok, thanks, to tell the truth, i wanted to put this here to get a gauge of how much work this REALLY needs, and so i can find some help with finding unbalanced things with these characters, like Infinites, specials that are gained too fast and do too much damage, combos that take off 70% HP, unbeatable strategies, underdeveloped characters, characters who do too little damage, ETC.

I wanted this so that when i gained the knowledge to fully fix these things, i didn't have to go on a hunt for these kinda things and could just get started with fixing them immediately, I doubt I can find that kind help for a roster this big, but I'm not going to get that by keeping this project to myself, so might as well just post it here.

Well, can give you nothing about the game itself since that's for now just compilation.
But I can give you advice on how to get started: MUGEN Class. Go learn some SCTRLs and Triggers, those are pretty much basics of chars, all the other stuff there is something more advanced.

I tried my best with what little i knew, i hope it doesn't come off as laziness, thanks for the advice though.

I knew i couldn't work on much while i couldn't use fighter factory, so i focused on balancing out characters and making the arcade mode have as smooth of a difficulty curve as possible.

i'd like to ask, is there any specific posts in "MUGEN Class" that you could highlight to be "GO TO's"?

For a long time, i have watched the M.U.G.E.N Community grow slowly,
watching great characters, stages, songs, bosses, games, artwork, and more, being made, but never going farther then the community its made in.

It also makes me sad that the M.U.G.E.N community can't seem to attract newcomers, outside of purely content creators or veterans.

So much great content, but nobody has any reason to see M.U.G.E.N as a big part of the fighting game community,
and those that acknowledge M.U.G.E.N, see it as just "a fun and dumb game with a insignificant and non-serious fanbase."

There are many reasons that this stigma exists, but we cannot deny that one of the biggest reasons is because there isn't
A Universal Competitive M.U.G.E.N game.
I have seen barely any talk of this kinda M.U.G.E.N game, and i want to change that with this project.

This game will not have characters or stages that were created for this game,
neither will this have consistent game-play styles or characters.
In fact, it will be the EXACT OPPOSITE

This game will be made up entirely of random M.U.G.E.N characters and stages that vary in game play and style, and will show off as many parts of the M.U.G.E.N community as possible, and all of it will be made to be well balanced, and made for a competitive scene

I have been working on a good roster for 3 years now, and I currently have done,

A Diverse list of 194 characters
40 Stages from many games and creators
Minor balancing that can be done directly in the .def file
Obvious overpowered and underpowered characters have been nerfed and buffed directly from the .def file
A fully functional arcade mode with with an increasing difficulty curve
A possible 11 minibosses, 10 bosse, 3 super bosses, and ???????

Now, there are some things I need to do

Make sure all characters are fine tuned for a competitive experience
Get/Create an original menu and select screen so I can stop using the LEGACY pack
Possibly create a story, intro, and ending for each of the characters in arcade mode 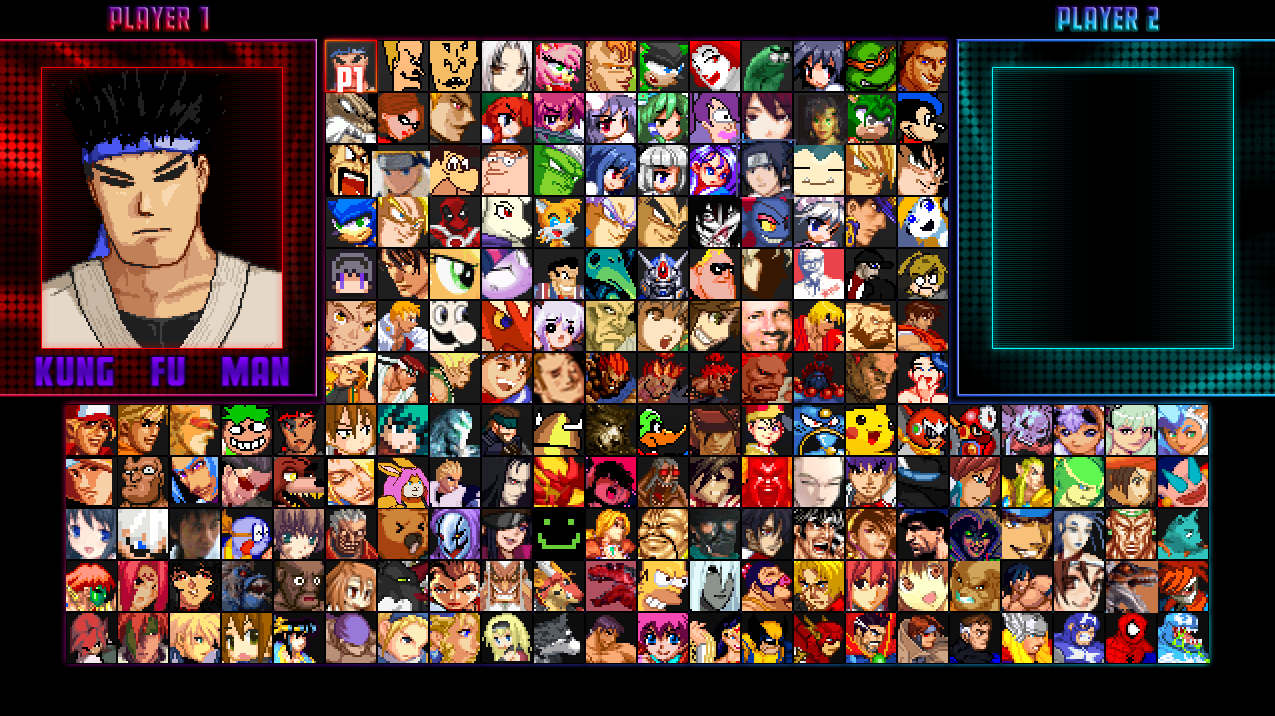 please give me your thoughts below.