Because the style of sprite I'm looking for is the z2. However, this will be at least 5 years from now.

ahh, I see. Hmmm, I wonder what a Z2 stylized Hulk would look like?

very cool. Superman, Storm and Flash are the most cool! WonderWoman and Hulk are great aditions! Maybe one day i will sprite hulk for mugen and your Hulk can become a great base.

Thanks!But why would you need to sprite my character if he's already made though? 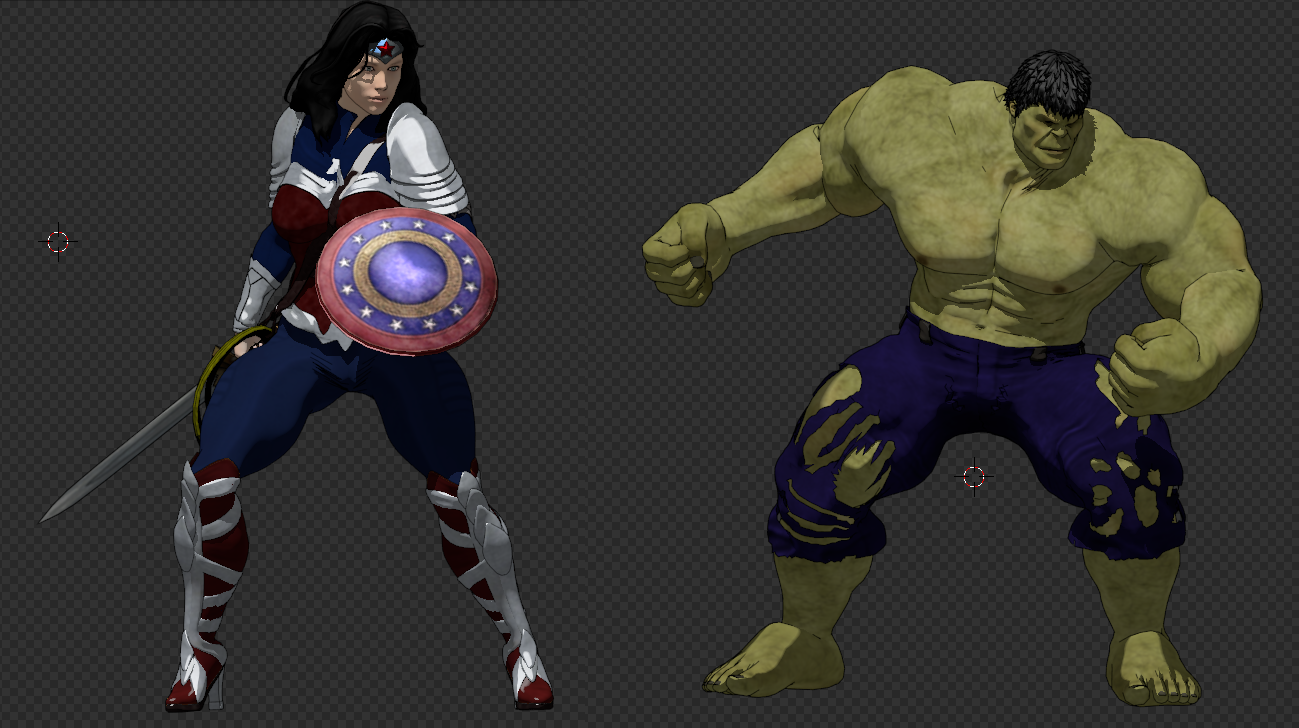 (not actual size of course)

Re: Super Crazy Jam - The king of Fighters Multiverse

Re: Code to make character invincible so long as they have meter?

you just need a super armor code using hitoverride. in the super armor custom state put a power add so every time hitoverride is activated power is removed. If you don't want it to be a fixed amount and you want it to be the same amount as the opponents attack damage, put enemy,gethitvar(damage) for the value.

Re: How to make a super with attacking clones/shadows

Well the way my special works is a 2hit combo, first me, then my afterimage(clone) a few frames after. I just trigger my helper to appear a few frames into the attack. i.e:

lets say your Super move has 15 frames with a time of 1each. The super hits on animelem 4,7,10,13
Trigger(as an example) your helper to appear on animelem/time =3  It will look like this:

Triggering the Helper to appear a few frames into the attack delays it achieving the results you want.

If you want to manipulate the time even further the easiest way is to create a new animation designated to your clone, using the same attack you want to mimic. In the (clone)animation you can mess around with the time for each frame until you get the desired results.

Re: How to make a super with attacking clones/shadows

This is fairly easy even if you're a beginner coder. My current WIP (The Flash) actually has this very thing you want to achieve as a special. You just summon a helper(clone) in your super and time his attack a few frames after your players attack starts.

I really like Flash’s design here, liking the masked look concealing his face. Kinda evokes Kamen Rider here. I have a few suggestions for characters:

A lot of very underused characters who deserve a chance at playability.

Thanks. I'm still working on alternate outfits for him, along with everyone else.

I know Terra from watching Teen Titans way back when....don't know the other two...got to do research.

update on the project
...fixed some coding bugs
....currently reworking mechanics and animations. Visually snappier attacks, steering away from the MK styled animation and leaning more on the SFV/MVC attack animation speed.

added Dizzy Stun probability that only applies to certain attacks.
Added random to Doomsday's Super Armor to balance him even further
Added a Supermove Icon similar to MVC
Added a Skill attribute for EX MAX meter feature. So when you're Meter is Maxed, each character will activate a skill that stays active as long as you remain maxed (i.e. Superman has health regen, Flash has 50% chance of auto Parry while in state0,etc.) This will add a level of strategy to your gameplay, deciding if you want to use your EX attacks or remain maxed to keep skill activated.
Changed Flash's Stance plus added one during EX Maxed out.

Re: Attack not connecting issue(video inside)

I had posted this a while back but I initially thought it was due to Super Armor but its not. I removed the super armor and problem still insists. so I'm posting again with video.
[youtube]https://youtu.be/UJGvi_686-4[/youtube]

The attack hits when only one attempts but if both executes Super the attack does not hit.

Nothitby have bug it's always not hit by anything.

remove your not hit by but increase to 6,hit

Yes!! I switched to Hitby instead and it works! Thank you very much!

man... this make senses... but looking at Hugo and Poison "Walks"  thays seems to be really walking normaly, not like on fighting stance.
anyway, i still don't know what i want:

Some advice. Stick to the characters personality to determine your choice. She's a Shoto character so she should sidestep more cautiously as a trained fighter would as opposed to walking down on her opponent straight forward like some type of brawler.
Depends on what you're trying to convey. I know you're probably wanting to do something different so it depends on whether or not you want to stick to the characters persona that everyone's familiar with or reinvent it.
All in all, I see slight improvement in your animations. Keep going!

Attack not connecting issue(video inside)

I had posted this a while back but I initially thought it was due to Super Armor but its not. I removed the super armor and problem still insists. so I'm posting again with video.


The attack hits when only one attempts but if both executes Super the attack does not hit.

Re: My AI Issues here

1. Simply put, if your AI is in the guard distance, It will switch to defense states automatically. The problem should be fixed once the enemy's attack is done or out of defense range.

2. Two posibilities: The AI hasn't been set up so it spawned attack moves randomly. Or, the problem occurs when the AI is set to be.(Intentionally and incorrectly which is contradicted to what it should have been).

3. It could happen because of the following state is missing, or the current statedef is unavailable. Or the ctrl is set to 0 instead of 1, making it stiff and unable to complete an animation, or the animation is missing. It's hard to determine the main factors that caused the problems. Guess I'd prefer some clips of the situations.

1. I put statetypeset,movetype = I at the end of my NA but I haven't gotten to doing it for SA. Could it be that my AI is getting stuck in block because the movetype is still defined as "A"?

2. I have an AI setup, unless you're referring to the "random commands" plus variable AI coding. I use Ailevel instead.

3. I've been looking and scouring for missing stuff but haven't found anything so I figured it might be something else. Will continue looking.

Most people disable guarding via assertspecial whenever AI control is present and use a changestate into stateno 120 so they can have better control over how and when the AI should block.

I'll try that out and see the results.

UPDATE : Ichida, you're right on all 3. My AIlevel<=0 was missing on some of my player command states I must of deleted by accident so the AI had access to it. Thanks.

I'm super confused by the pretext. Is it a problem about being able to release back while blocking?
And I don't know what frame data is being compromised. So....?

When blocking a chain of combos, my character remains in block even if command != "holdback" anymore, so long as I successfully blocked the first attack of the chain. Its kind of like, If I successfully blocked the first attack I can release "holdback" because now I'm on autoblock until the opponent stops attacking and my guard.hittime/ctrltime is over. In every fighting game, you must hold block until the opponent stops attacking or the next attack along the chain will hit.

My characters have 4 ticks in GUARDSTART, -1tick in GUARD, 10 ticks plus -1 on last frame of HIT BACK WHILE GUARDING, and 6 ticks on GUARDEND.

I use statetype = I after the element of each attack

How should I edit the guard code and/or hitstun without compromising frame data? 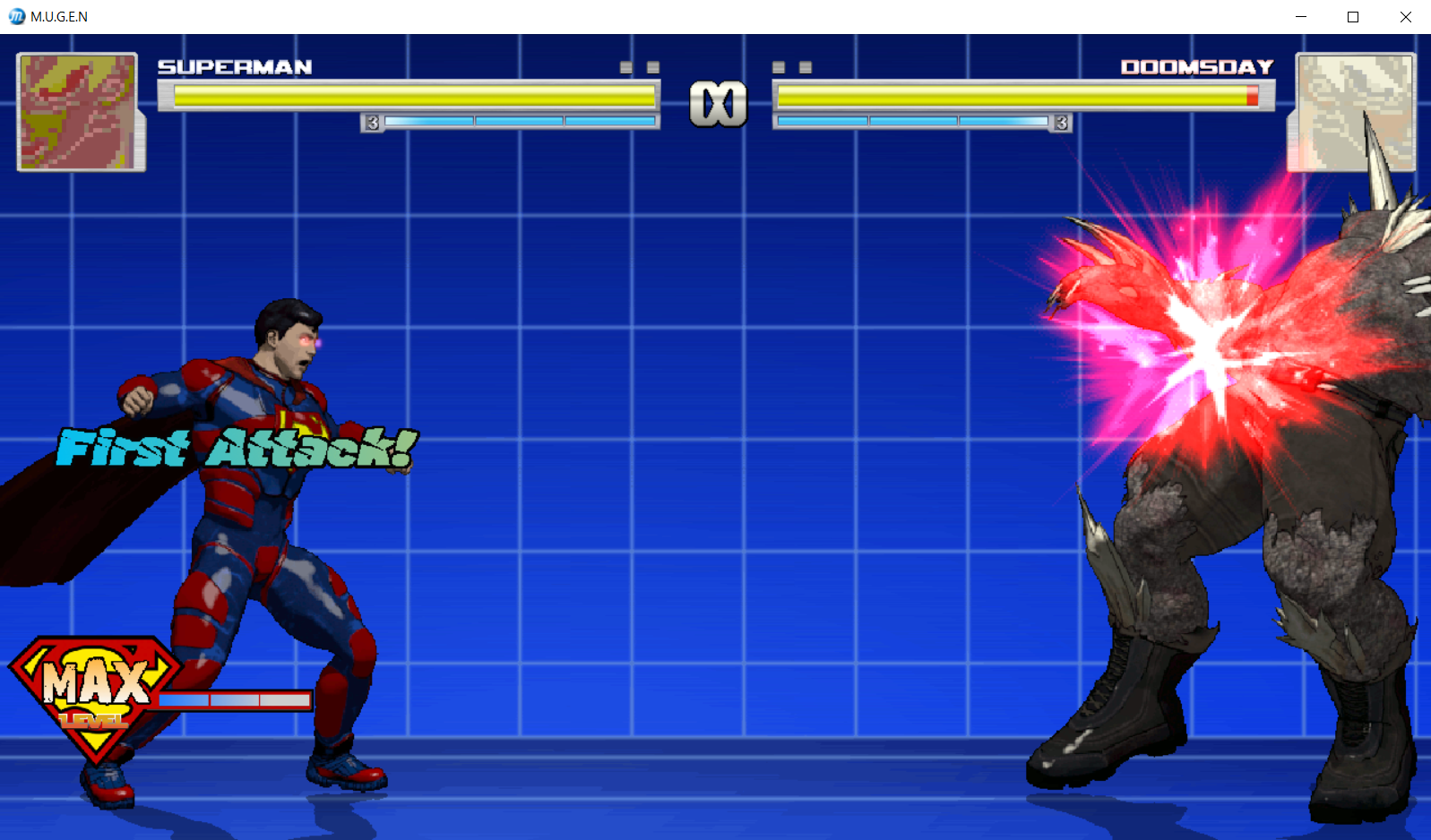 When stuff like this happens, I try to make a quick test. I'll exaggerate the animations' timings. like standing light punch will take 2 full seconds to happen with each frame being very pronounced. Then I try all the mixes I can make happen. This way I can SEE what's causing the hiccup. I usually just add one 0 to the end of the timing. So if the frame is 3 tics, it's 30 tics. 5 tics is 50, and so on. Then I just delete all the 0s and it's back to normal.

You might be able to figure out exactly what the issue is.

Solved the issue. It wasn't the hitoverride super armor at all, as I noticed it was happening with attacks not containing super armor. Turns out it was hit priority in the hitdef. I char I used as a base for coding initially had different values for priority depending on the type of attack. After doing research I found that the most convenient method for priority would be to just set all of them as priority = 4,hit. I'll reserve priority 5+ for specific events such as anti-air attacks. Thanks for the all the suggestions everyone.

That's better. Fix the knees though. Rule of thumb: the knees normally points the same direction as the toes.

First of all, MAN I LOVE THIS!

Been on my mind for a while so I took a quick break from Storm to pose Superman's stance. Trying to pick between the two. Hovering or grounded? 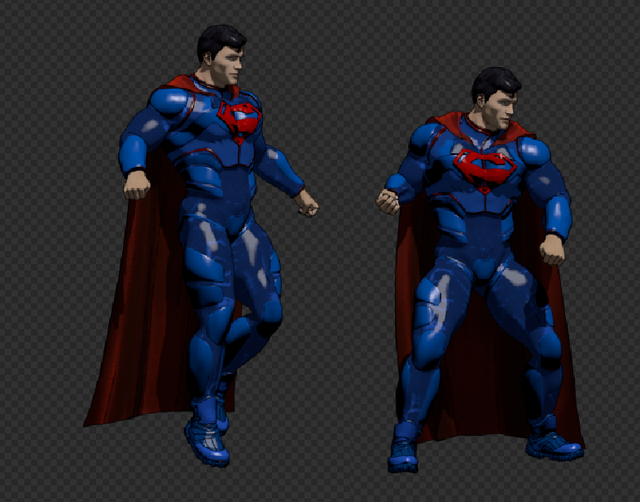 Also not sure if I want to implement a "flight" system. If I were to do so, then I'd use both (one for flight and one for grounded). Pondering

ahhhh...I did think about using "hurt" stances in the game but I never thought about using the hovering in that manner. Only thing with that is I'd have to basically make 2 sets of characters because at the end of most animation the character recovers into their stance. some animations even start from the stance as well. So I'd have to make 2 set of animations (GH,movement,attack,special,etc) for good health and another set for hurt. That's double the work. And I'm not sure but its possible that some of my characters may have a transformation. 1) I'm doing this solo I don't have the time to create extra work 2)using 3d animation takes up a lot of frames already, I've had to start my characters over like 10 times because of file size. I'm trying to keep frames down to a minimum.
Now, I could just ignore that and Just do the "hurt" animation by itself but then the other animations (i.e. a simple light punch) won't transition into the hurt animation smoothly, and I'm a stickler for detail, so.....idk

and to everyone, Here's a little taste of Ororo