New Super Mario Bros. Mushroom Kingdom (based on the name, it may have been made by the same guy who made the desert stage)

You are in luck buddy, I have this one too. It's labelled "nsmb1", and the stage name is "New Mushroom Kingdom", so it is indeed by the same creator as the desert stage. However, the creator's name is missing from the def. I guess we'll never know who made this lol, considering the year I got it, it deffo was a fairly "common" stage to find at the time.

Hey, good job with Gill! He always felt the most incomplete to me.

I'm really digging the AI update, since he was so weak before. However, I feel like he goes through his meter too fast, which results in him never using his Resurrection move.
Maybe you could add an alternate def/config file or something to make it always trigger on the second round, regardless of his powerbar? Or instruct his AI to not use meter, I think the original version used to do this in the second round too.

Re: How do i change OMEGAPSYCHO's MK2 Johnny Cage's block motion?

Hello, I'm requesting the 2007 full game Super Smash Bros. Showdown. I have found a lot of characters over the years (and edited some of them), but I have been unable to locate the game itself. It's been 15 years, so just googling it won't do the trick anymore. If anyone by some miracle still has this game, I'll greatly appreciate if you could reupload it!

EDIT: modified the OP to include all requests

Mulk stage by brown is pretty good too. It replicates the first level of Ninja Warriors for arcade.

Does anyone know if a good Orochi exists? Anything Kof 97/98/UM/NGBC or similar will do.

Thanks a lot! GONZO's Orochi is just what I was looking for.

Re: Sega vs. Capcom 2 Dream Cast of Heroes Full Game

I've been having a blast with this game, roster is very solid. Here's some things I noticed while playing.

First of all, why is Captain Commando not in cvs scale? that makes him look oddly stretched when compared to everyone else.
https://i.imgur.com/P5UGAAd_d.webp?maxwidth=760&fidelity=grand

Secondly, I discovered an easy infinite that kiryu can do on anyone in the corner.
https://streamable.com/nkmpso

That's all that really stood out to me for now. Good work with the game!

whoa, I remember this one. I got it from some Scruffydragon SF SNK fullgame a long time ago.
Since this is from said fullgame the portraits will look messed up, but it is indeed what you're looking for. Jojo mode is in pal7 and over iirc.
https://www.mediafire.com/file/0wazhljm6rhgdhs/ryu_by_z_sabre_user_%2528honda_mode%2529.zip/file

Posted by niserika  in Zodiac's English .snd Patch for CHOUJIN's Cell (Started by KatsupSpecial September 08, 2021, 01:46:57 AM
Board: Requests

I have this in my old mugen from 2009, I'm certain I downloaded it from DBZDream back in the day.

I should have the other eng voice packs too, in case you need them.

Re: Anyone have (or know where to find) these old Mario stages?

I have the first one, it is indeed called "Just a stage", creator is listed as Dishamonpow.

It seems I edited the DEF file sometime in 2009, but I most likely just changed the music section.

Re: Old versions of Z2 characters?

I have some characters lying around here, dated late 2013. I don't know if these are the latest versions that had editable voices, but it might be useful anyways.

Does anyone know if a good Orochi exists? Anything Kof 97/98/UM/NGBC or similar will do.

Ok so I've had these dudes in my HDD for way too long, and it doesn't seem like the full game will be reuploaded ever, so I'm "releasing" them.

These characters come from a fangame called "Super Smash Bros. Showdown", released around 2007 on VGAForums. I was a part of this forum (as wheelman543) and managed to grab the game during its peak. Although I currently don't have the game anymore, I kept some characters from this project, which I will be posting here as I don't want them to be lost forever.

Sonic, Tails and Shadow were edited originally by Xihark, with additional sprites by TruelyEpic. The original characters come from the "Freedom Fighters 2" Full game by MugenHunter, which I'm sure many are familiar with. The characters are in general much faster than the originals, and feature additional supermoves. A more detailed readme is provided for every character.

** All finishers are unblockable with the exception of the super backflip wave.
** You can chain any finishing move into another finishing move as long as it isn't the same     move or the upgraded version of the move you are using.

:: One and a Half Power Stock

** All finishers are unblockable, with the exception of the level 3.

[A+B+C / X+Y+Z] - Missile Drop
*Retreat and fly back in with Sonic's signature plane. Tails then proceeds to drop 3 bombs      in arranged fashion- left, right and then center (from 1P's side.) Blockable.

** All finishers are unblockable with the exception of the super backflip wave.
** You can chain any finishing move into another finishing move as long as it isn't the same     move or the upgraded version of the move you are using.

:: One and a Half Power Stock

[D,DF,F,D,DF,F, [A+X] - Chaos Blast [*****]
*I'll show you my ultimate power! If the short rush move connects, Shadow unmercifully hammers at that single enemy. He then launches the foe to follow up with Chaos Blast, by bringing two orbs of energy together; then exploding. Colossal damage.
My edits are as follows:

Shadow specific edits:
The original CNS and CMD files for Shadow are provided in the download. 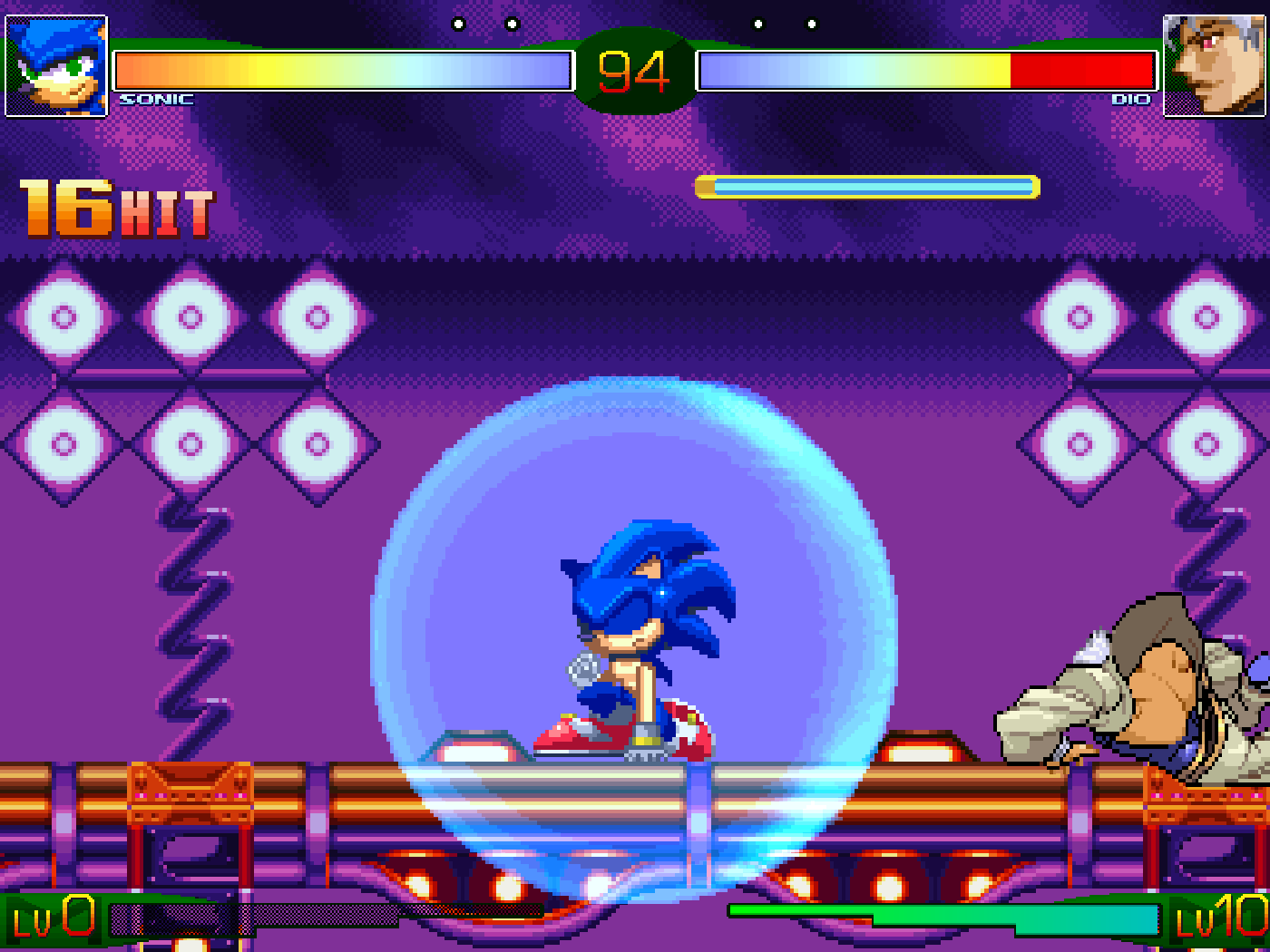 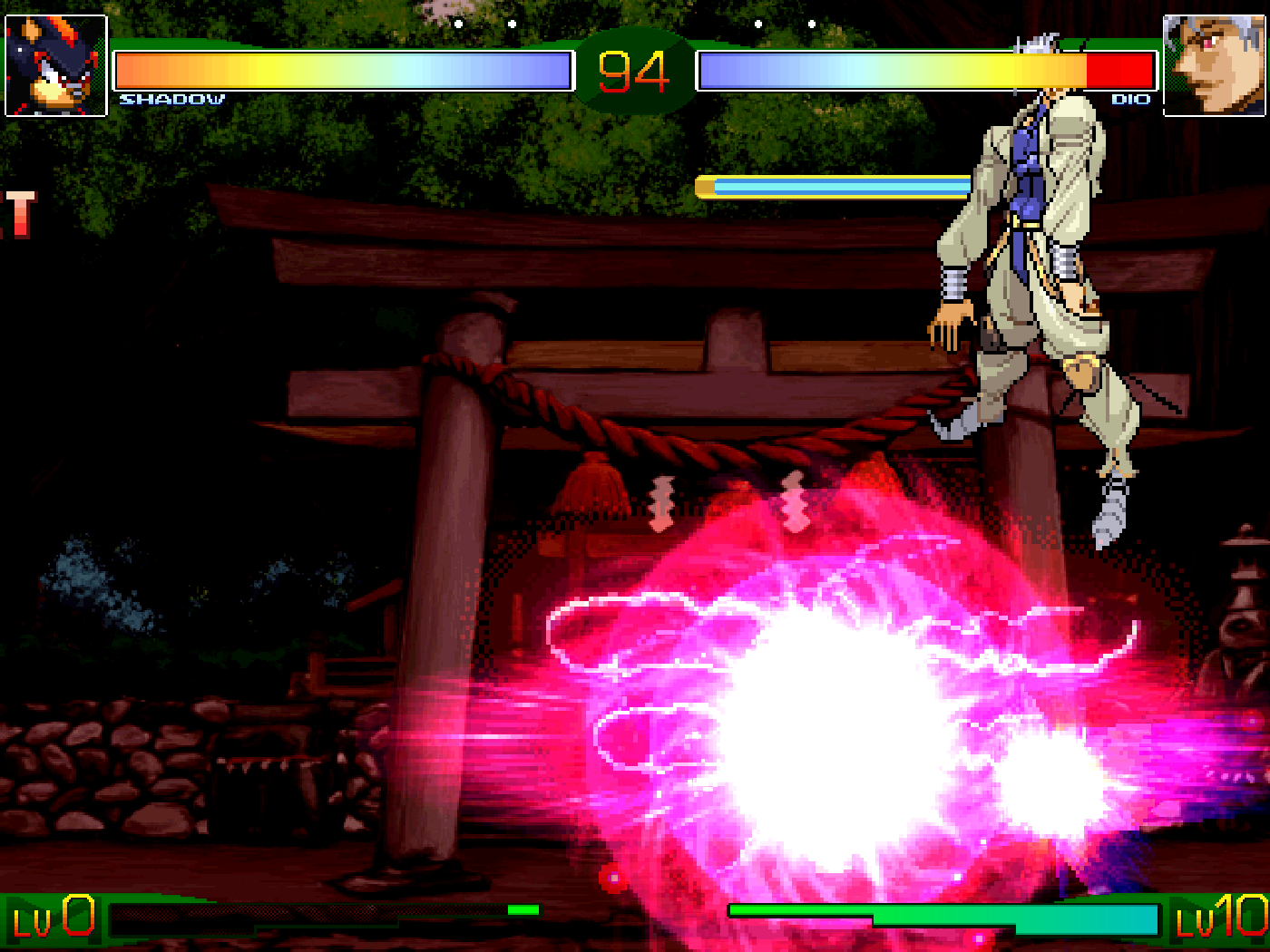 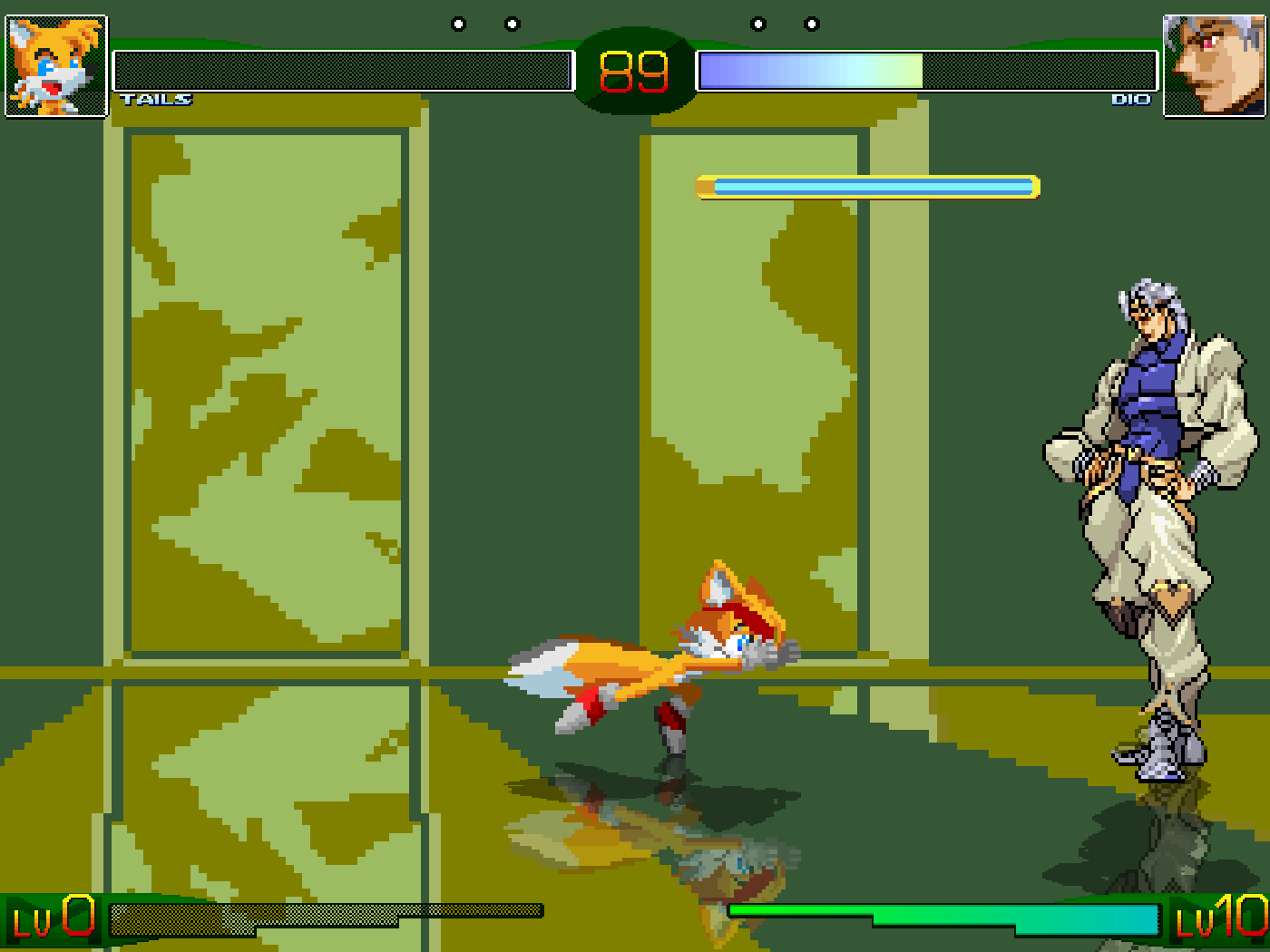 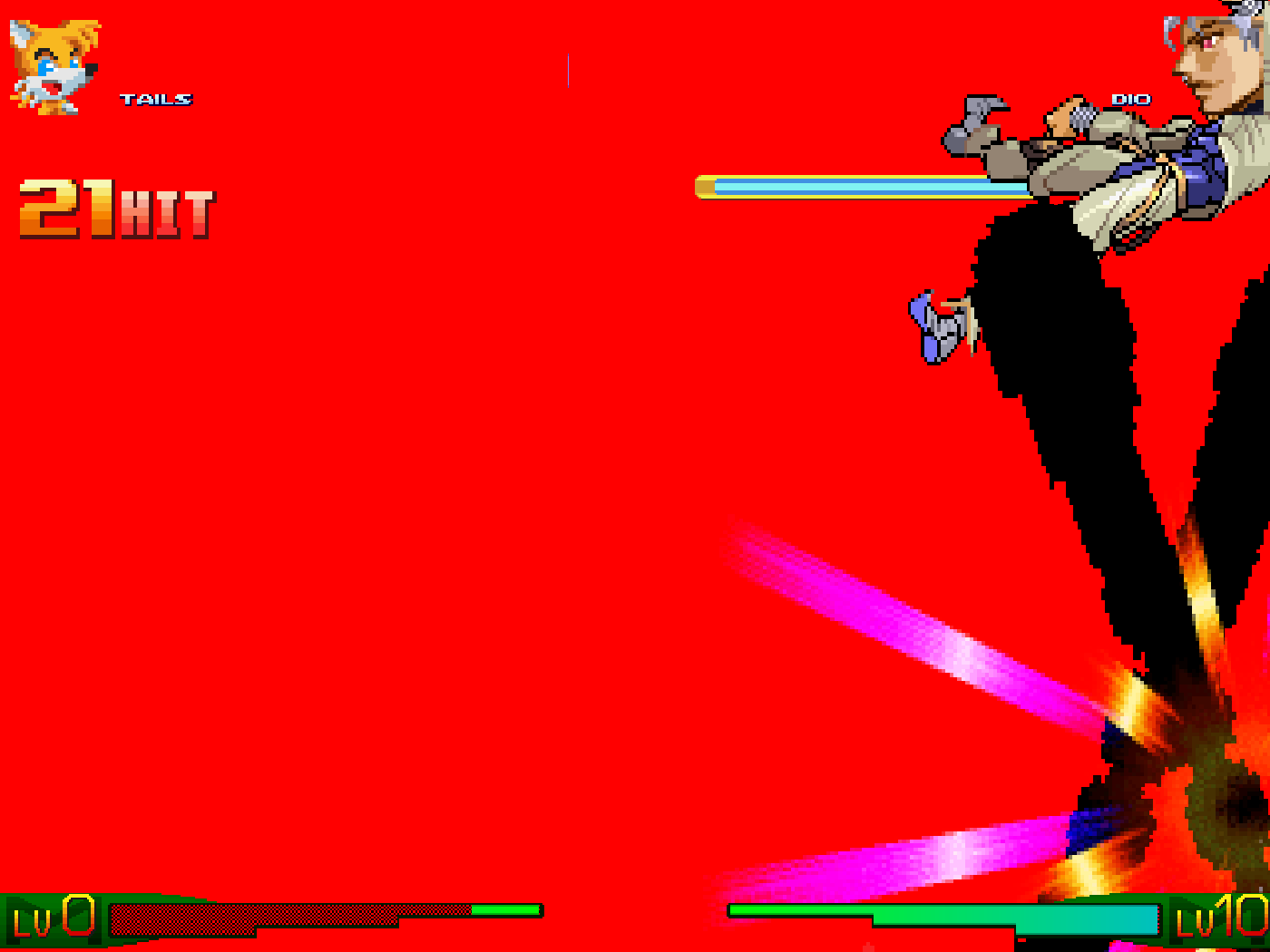 All in all, enjoy these characters! I haven't touched these in years, so this will be the first and only release.

If anyone reads this again, I asked roach personally to reupload this stage a few months ago, and he did!

I'm looking for this stage 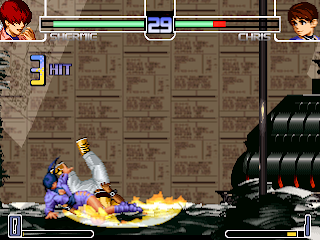 I found this thread but all the links are dead, does anyone still have this? Thanks in advance.

I found this in my old hard drive

I'll send you a PM

the website (http://members.lycos.co.uk/ss5ace174) is offline, and the only wayback machine link i could find was also offline

does anyone still have this?

I'll PM you both a link